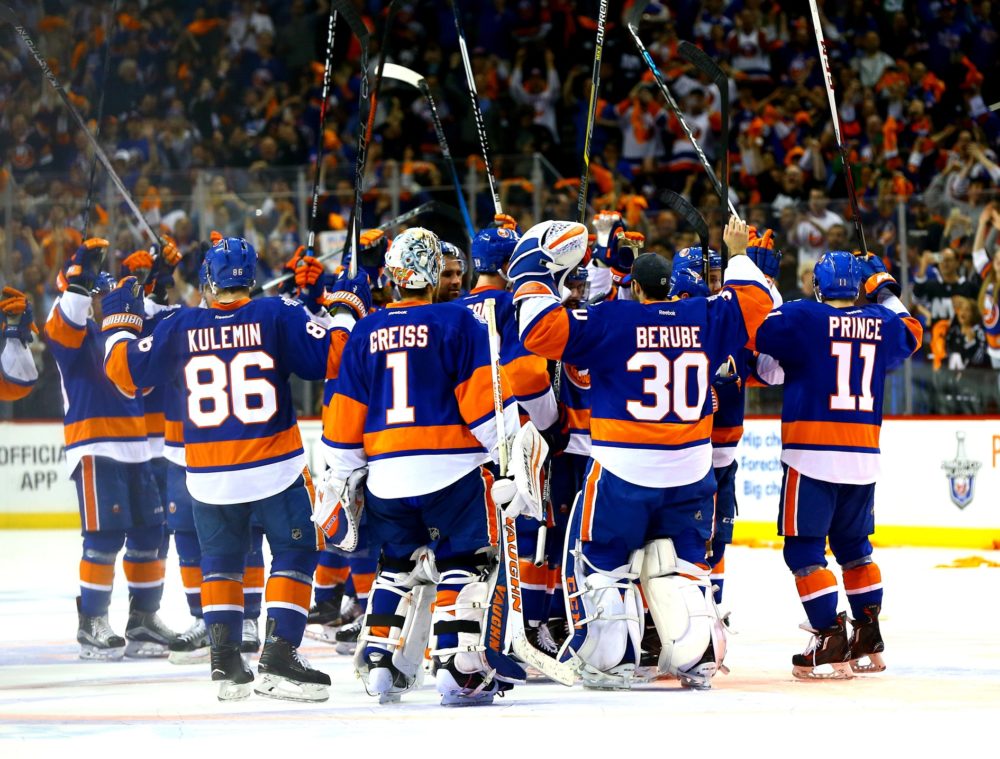 The New York Islanders are definitely one of the most unique franchises in all of the NHL. They go from the last team to win four straight Stanley Cups to a team that has two home arenas. Whether it’s trades they make or free agents they sign, people are always questioning the Islanders. One thing for sure is that this franchise has played some of the craziest games in NHL history. Some they won, some they lost, but here is a breakdown of their five best wins.

While John Tavares may be one of the most hated players to have played for the Islanders after the long-time captain decided to sign with the Toronto Maple Leafs, he provided perhaps the greatest moment for any Islanders fan born in the late 1990s. This franchise had not won a playoff series in 23 years, but that changed one Sunday night at the Barclays Center.

As the Islanders gave up the opening goal in virtually every game of the series, they had to come from behind again in Game 6. Head coach Jack Capuano pulled his goaltender, Thomas Greiss, for an extra attacker with his team down 1-0.  After a scramble in front of the net, Tavares scored the game-tying goal on a rebound with under a minute to go in regulation.

He wasn’t done yet as the game went into double overtime and Tavares came in on a harmless-looking zone entry. He threw a backhand toward the net that goaltender Roberto Luongo kicked aside, but dthe Isles captain got to his own rebound and wrapped it around the Panthers net for the game-winning goal to advance the Islanders to the second round.

There had only been one team in professional hockey history that came back from a 3-0 series deficit and that was the Maple Leafs in 1942. The Islanders can say they did the same thing in 1975. Trailing three games to none in the 1975 quarterfinals of the NHL Playoffs against the Pittsburgh Penguins, the Islanders won the next three games. They outscored the Penguins 11-3 in those games to force a Game 7 in what created a storied rivalry.

New York’s offense seemed to cool down a bit in the final game, but continued to get excellent goaltending from Billy Smith from Game 4 on. The Islanders original captain, Ed Westfall, scored the lone goal in the third period to give them a series win.

The Islanders had one of the greatest dynasties in all of sports. They won four straight Stanley Cups heading into the 1984 Playoffs before facing off against the New York Rangers. With the Islanders up three games to one and on the verge of heading on the road for Game 6, 1980 Olympic gold medalist Ken Morrow gave the Islanders one of their top moments in franchise history.

The Islanders trailed 1-0 before Mike Bossy tied the game with 11 seconds left in the first period. It looked like the they didn’t need any extra time as Tomas Jonsson scored in the third period to give them a 2-1, but with under a minute to go, the Rangers tied the score at two.

At 8:56 of overtime, Morrow scored the game-winning goal on an assist from Brent Suter to eliminate their crosstown rivals and give the Islanders their 17 straight playoff series win. They eventually won 19 straight series until they fell to the Edmonton Oilers in a rematch of the 1983 Stanley Cup Final.

With the Islanders coming back from a three to one deficit in the 1987 Patrick Division Semifinals, April 18 will always be remembered by one special moment. Though the game started on April 17, the magic happened well into the night and early into Easter Sunday.

The Islanders fell behind 1-0 early in the game before Patrick Flatley tied the game up at a goal apiece in the second period. The Washington Capitals once again regained the lead late in the second period and held on until late in the third period. With 5:23 left in the game, Hall of Fame forward Brian Trottier scored his fifth goal of the playoffs on assists from Alan Kerr and Steve Konroyd to tie the game at two.

With Islanders goaltender Kelly Hrudey making 73 saves in the game, the game came to a close in the fourth overtime. Holding possession of the puck in the offensive zone, Ken Leiter took a shot that was blocked and came to Pat Lafontaine. Without hesitating, he let go a shot from the blue line that beat Bob Mason for the game-winning goal to advance the Islanders to Round 2 to face the Philadelphia Flyers.

Every little kid that has ever laced the skates up has one dream and that is to score the game-winning goal in overtime in the Stanley Cup Final. It has only happened 17 times in NHL history, but one of those times happened with the Islanders.

In Game 6 of the 1980 Stanley Cup Final, the Islanders and Flyers were deadlocked in a 4-4 game. The Islanders had a 4-2 lead in the game at one point from goals from Denis Potvin, Duane Suter, Bossy and Bobby Nystrom, but let a two-goal lead in the third period get away.

However, at 7:11 of the first overtime, the Islanders had their greatest moment as a franchise. Lorne Henning started the play, finding John Tonelli and Nystrom on a two on one. Tonelli lifted the puck to Nystrom’s backhand, and he roofed it into the empty net for the Islanders’ first of four-straight Stanley Cups.

There were a lot of great wins that this franchise has had. They have played some of the longest games and had some classic overtime wins. The Islanders will look continue that magic with the new season starting in October.