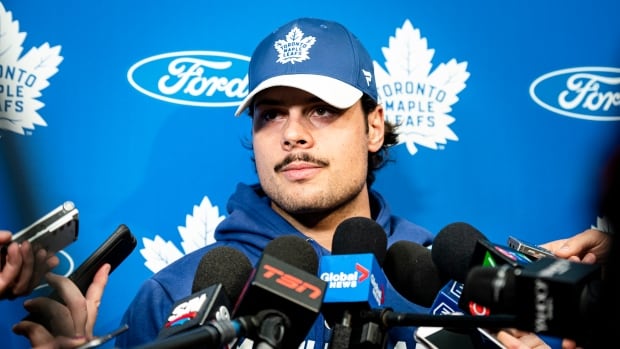 This is a web version of CBC Sports’ daily email newsletter. Stay up to speed on what’s happening in sports by subscribing here.

Here’s what you need to know right now from the world of sports:

The captaincy may have lost its lustre

Seven NHL teams have yet to name a captain for the upcoming season.

Last season, six teams, or 20 per cent of the league, played without a captain. The Maple Leafs, who haven’t had a captain since Dion Phaneuf’s mid-season departure four years ago, are on record saying that will change soon, while the Senators have said they will go without one. The Canucks, Red Wings and Rangers are all younger teams entering year two without a captain. Hurricanes captain Justin Williams recently retired and the Golden Knights have yet to name a captain in their two years in the league. It’s now been one decade since every team in the league had the position filled.

What does the captain do, anyway?

According to the NHL rulebook: “He alone shall have the privilege of discussing with the referee any questions relating to interpretation of rules which may arise during the progress of a game. He shall wear the letter ‘C,’ approximately three inches in height and in contrasting colour, in a conspicuous position on the front of his sweater.” Essentially, a captain is the team’s official complainer. No one else gets the privilege of talking to the officials, unless that player is an alternate captain, in which case he is permitted to complain so long as the captain is on the bench. Surely, no hockey player would dare break this rule.

So what does the captain really do?

Captains are the acknowledged leaders in the dressing room, and it used to be that captains would help new players get acclimated — he might help find them a place to live, show them the good spots to eat and generally try to make them feel more comfortable. But teams have rightly taken on more of that responsibility so players can direct additional focus to the ice. And so now the captain’s role is more nebulous. Whether it’s by example, or by fiery speech, or by the ‘storm surge’ celebrations led by the Hurricanes’ Williams, the captain is billed as the emotional leader of his team. The captain also typically bears extra responsibility with the media, meaning he must answer for tough losses, but he probably also gets some additional credit for big wins — especially in the playoffs. Of course, the captain is also the first player who gets to lift the Stanley Cup.

After Carolina beat Pittsburgh 3-2 in a shootout, they pay homage to the classic video game ‘Duck Hunt’. 1:02

Only the 1970 and 1972 Boston Bruins won the Stanley Cup without a captain in the modern era.

And those teams weren’t exactly lacking for leadership with Bobby Orr, Johnny Bucyk and Phil Esposito on the roster. It’s become a bit of a tradition during the playoffs to ponder who would get the Cup should a captain-less team win — think 2018 Vegas Golden Knights — but we haven’t had that issue in almost 50 years when Bucyk took it for the Bruins. The bigger question, given the drought of captain-less Cup teams is almost as long as the Leafs’ title-less streak, is how important that ‘C’ is to winning. Obviously, leadership is important in any workplace, and employees tend to work harder if they like their boss. Hard work is an essential element in winning — the reigning champion St. Louis Blues are a prime example of that. But hard work is meaningless without the requisite talent.

There are seemingly three choices for the role in Toronto: Auston Matthews, John Tavares and Morgan Rielly.

Matthews, 22, may be the best bet, given the trend of teams having their best players don the ‘C,’ regardless of age. The newly mustachioed centre is now entering his fourth year in the league and his first year as the highest-paid player on the Leafs. He has 10 goals in 20 career playoff games. He scored four goals in his NHL debut. It doesn’t seem as though pressure bothers him too much. At 29, Tavares is the old(er) guy on what’s still a pretty young team. He spent five years as captain of the Islanders, and while he hasn’t tasted much NHL post-season success, he did win Olympic gold with Team Canada in 2014 (he missed the final two games because of injury) as well as world junior gold in 2008 and 2009. Rielly, 25, is the current longest-serving Leaf at 388 games and was in the conversation as the NHL’s best defenceman for much of last year.

It’s clear contenders still place some value on the ‘C’

Quality leadership can boost a strong foundation, but it can’t dig a bad team out of the basement. Football teams name captains, but most baseball teams don’t. Derek Jeter was named Yankees captain in 2003 and he won one World Series with the title after claiming four without the captaincy. Basketball teams don’t name captains, but Mike Babcock instantly brought up the quiet dominance of Kawhi Leonard on the Toronto Raptors when asked to describe the characteristics of a captain. Babcock said in the same scrum the Leafs would announce a captain “soon.”

Andre De Grasse is feeling good at the right time. The Canadian sprint star says he’s homed in on his health this year, and his season-best 100- and 200-metre times are each less than one-tenth of a second off his personal bests set at the 2016 Olympics. With the track and field world championships beginning Friday in Doha, Qatar, De Grasse hopes the changes in his diet and sleeping habits help him regain the form that once had him in the conversation as the next great sprinter. Read more about De Grasse’s renewed focus here.

Canada is poised to enjoy some success in Qatar. The Canadian record for medals won at a single track and field worlds is eight, set in 2015. Medal winners returning from that team this year include De Grasse, decathlete Damian Warner and middle-distance runner Melissa Bishop-Nriagu. Gabriela DeBues-Stafford also enters as a podium favourite in the 1,500. Despite the recent record, Canada’s always boasted quality at this event, highlighted by Donovan Bailey’s 1995 brilliance. Watch a video montage of Canada’s best moments here.

The Patriots finally moved on from Antonio Brown. The receiver, who is accused of rape and sexual misconduct in separate cases, lasted one game in New England. The Patriots were willing to use Brown even after the rape accusation emerged one day after his signing, but they seemingly drew the line when it was reported Brown sent intimidating text messages to the second woman accusing him of sexual misconduct. New England is reportedly planning to void Brown’s guarantees, meaning he’ll have lost $40 million US after he was also cut by the Raiders this season. Now, Brown says he’s done with the NFL and intends to file a grievance against the Patriots for the remainder of his contract. The rest of us are just ready for this story to go away.

Brayden Point became the latest RFA to sign, and it’s a(nother) bargain for Tampa Bay. The Lightning set regular-season records last year, and just signed their third-leading scorer to a three-year bridge deal worth just $6.75 million per year. Point had 41 goals and 51 assists for the first-place Lightning, who were shockingly upset in four games of the first round to the Columbus Blue Jackets. The Lightning also have reigning MVP Nikita Kucherov, Steven Stamkos, Victor Hedman and Andrei Vasilevskiy each locked up at less than $10 million through at least 2023-24. A dynasty in the making. Read more about Point’s new contract here.

The Blue Jays avoided a 100-loss season. Friday’s win over the Yankees was Toronto’s 63rd of the campaign, meaning the most the team can lose now is 99. The franchise hasn’t hit triple-digit losses since the early expansion years (1979 being the last) and a six-game winning streak helped prevent this year’s team from matching that dubious distinction. The Jays play their final six games of the season this week, with three chances to beat up on the 51-105 Orioles followed by three chances to spoil Tampa Bay’s wild-card hopes.