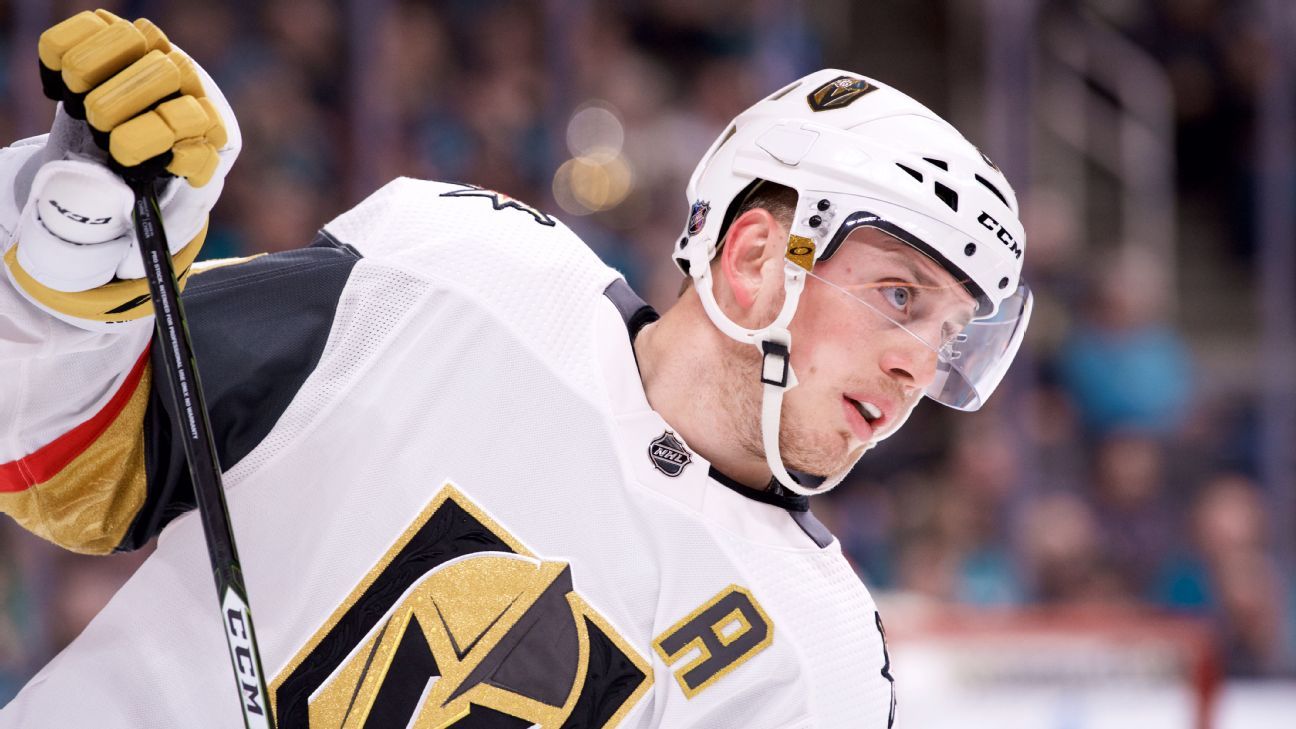 LOS ANGELES — Vegas Golden Knights defenseman Nate Schmidt still cares whether or not you believe he’s a cheater. Almost as much as he cares about never seeing another player go through the humiliation he has endured.

“No one in the world can say that they don’t care that people think they’re a cheater,” Schmidt told ESPN after a Knights preseason game last week.

After being suspended for the first 20 games of the 2018-19 season for violating the NHL/NHL Players Association Performance Enhancing Substances Program, Schmidt said he has worked with the NHLPA in an effort to change the league’s minimum threshold for a PED violation.

The topic has been discussed recently as part of the ongoing collective bargaining talks between the players and the NHL, and there’s reason for optimism that the policy will be amended.

“I knew the NHL and the NHLPA were putting the final touches on, and trying to amend, the testing system,” said Schmidt. “Once I heard there were some possible changes, some dialogue about it, that’s when I started to feel better about what happened.”

On Sept. 2, 2018, the NHL announced that Schmidt had been suspended, without pay, for testing positive for a performance-enhancing substance. The 20-game ban was notable for its rarity, as Schmidt was just the fifth NHL player suspended for PEDs since the league’s current CBA was ratified in 2013. The most recent suspension before that was in 2016.

It was also notable for the pushback it received from the Golden Knights, who emphatically stood by their player and subsequently signed him to a six-year contract extension; and from Schmidt himself, who released a detailed statement vehemently denying PED use. Among the memorable defenses: an expert testifying that the substance in Schmidt’s system was at levels so miniscule that it was “the equivalent of a pinch of salt in an Olympic-sized swimming pool.”

He returned to the ice after 20 games, playing 61 games on the season and putting up 30 points. His agent, Matt Keator, said that’s just how Schmidt is wired.

“He’s such a resilient kid,” Keator said. “He saw this as a bump in the road. He used this to strengthen himself. It was motivation to prove himself. And obviously, with that contract, Vegas believed in him.”

His game was back. But Schmidt believes his reputation never fully recovered.

“You only get one name,” he said. “It means a lot to me, and to my family. That’s the part that really bummed me out: My mom and dad, my brother and my sister and my family. Them going through that stuff, that was the hardest part. I know that my family will love me no matter what. But it was hard.”

Both Schmidt and Keator stressed that they have no desire to relitigate the past.

“The people closest to me feel like it’s been resolved, and that’s the most important support factor for me,” said Schmidt.

Instead, Schmidt wants to influence the future of PED testing in the NHL.

Both his agent and the NHLPA confirm that Schmidt has been a “passionate” voice in trying to get the testing thresholds raised. While these discussions would have likely occurred anyway during the CBA talks, Schmidt raised so much awareness about the perceived injustice of his suspension that it served as an important example for why the standards might need to be amended.

The NHL declined to comment when asked about those discussions.

Schmidt wouldn’t offer specifics about what changes he’s seeking, but then he’s not been all that specific about the details of his positive test, either — other than unambiguously stating that he disagreed with his suspension for it.

“Throughout my playing career I have been tested numerous times, including twice last season, and I have never before tested positive. It was utterly shocking to be informed that I tested positive for a microscopic amount of a tainted substance. Not only did I not intentionally take a banned substance, I could not have received any performance enhancement benefit from the trace amount that inadvertently got into my system at a level that was far too small to have any effect. This low amount was consistent with environmental contamination that I could not possibly have prevented,” he said in a statement last September.

The working theory, multiple sources have told ESPN, is that Schmidt’s positive test was the result of consuming tainted meat.

If that sounds familiar, it’s the same argument made by boxer Canelo Alvarez in 2018. He tested positive twice for clenbuterol, a substance used by farmers in Mexico in their cattle feed to reduce fat and increase lean muscle mass. A hair sample taken from Alvarez didn’t detect any performance-enhancing drugs. An expert did the same with Schmidt’s hair, and “concluded there was no evidence of intentional use,” according to the player’s statement last year.

It’s not been easy for Schmidt after the suspension. He said he only started to work through his bitterness in the second half of the season, concentrating on helping the Knights back to the playoffs.

“That was from a hockey standpoint,” he said. “But my job wasn’t done. I didn’t want that to happen to another player.”

As he enters his seventh NHL season, and third with the Vegas Golden Knights, Schmidt admitted that getting the NHL’s PED system changed could, in some small way, change perceptions about his own “cheating.” That if the thresholds were seen to be too low — something the World Anti-Doping Agency is reportedly looking into as well — then Schmidt’s positive test would seem unmerited in hindsight. That if the testing standards were amended, then his suspension would be viewed as unwarranted.

Those would be the ancillary benefits to the NHL and the NHLPA coming together to change their minimum PED testing thresholds. But Schmidt said the main objective remains protecting other players from the embarrassment and frustration he suffered last season. He doesn’t necessarily need that validation for himself.