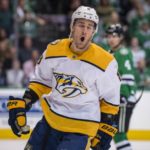 Adam Vingan of The Athletic:  It was a year from hell for Kyle Turris. This September, Nashville tried to find the answer in training camp.

That included playing Turris on the wing instead of the center position. This is his last chance at playing in the top-six in Nashville. Unfortunately, the next stop for Kyle Turris likely includes a change of destination.

Turris appears excited by the move. He never played wing in the NHL. Matt Duchene chimed in with this observation.

“I think going from center to the wing is easier than going from wing to center,” said Duchene, who has experience on the wing. “At the center, you’ve just got a lot more going on out there than on the wing. (Turris) is a really talented player and great shooter, so I think he’s a guy that could really thrive there.”

Peter Laviolette sparking Turris in any way he can represent the dilemma Nashville finds themselves in. Nashville needs Kyle Turris to return to his scoring form. That increases his trade value or helps make it easier for the Predators to keep the forward. The crossroads is here for Turris.

Kevin Fiala and a new beginning, among others?

Michael Russo of The Athletic:  It was a tough week for Fiala as he awaited his VISA to get back into the United States. In that time, a lot was revealed about the forward. Also, Fiala came into camp 15 pounds lighter and with a body fat of just 5.7 percent.

Fiala expects to see second line ice time and must be better than what he showed last year. The forward signed a two-year, $3 million AAV. Minnesota will not hesitate to move the winger down the lineup or even off the team.

This is a crucial season for Fiala and the forward knows it. The Wild have an edict and they will pursue all avenues to accomplish that goal. That may or may not include Fiala in the future. Nothing is set there yet. Like Kyle Turris, the crossroads is here for Minnesota forward.