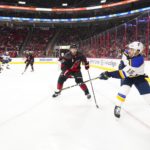 The Blues also announced they have signed Faulk to a seven year contract extension worth $45.5 million – a $6.5 million salary-cap hit.

“We are excited to add Justin to our core group for the next eight years,” Blues General Manager Doug Armstrong said. “He’s a Top-4 defenseman who averages over 23 minutes a game and we are confident he will be a strong addition to our club.”

The 27-year old Faulk was drafted 37th overall in the 2nd round of the 2010 draft by the Hurricanes. He carries a $4.83 million cap hit this season.

Thoughts from the media

Brian Bartlett: “For @StLouisBlues fans unfamiliar with @JustinFaulk27, over the last 5 seasons, among NHL defensemen, he ranks:

Andy Strickland: “Should contribute on PP and provide another puck move from the back end”

Cory Lavalette: “As for Edmundson, whom we all know a bit better than Bokk, he’s the big, physical D Carolina has lacked in recent years.”

Sean Tierney: “CAR gets cheaper and acquires a prospect too. STL gets the better defenseman but they also had to pony up a long-term deal for a 27 y.o. I’m not sure I prefer either side here.”

Mark Scheig: “I hope fans understand that the Carolina Hurricanes are on the verge of being a legit NHL powerhouse. They’re young, fast and loaded.”

Neal McHale: “Pietrangelo, Parayko, Faulk are all right-shooting D with offensive elements to their game. That’s a nice luxury to have”

Will Scouch: “A fine add for St. Louis. The extension expires when Faulk is 35, but is future problem. Bokk is a really nice pickup for Carolina and they can bring him along nice and slow with their already ridiculous cupboard. Edmundson slots in better than Faulk would’ve, I’d think.”

Tony Ferrari: “The Blues add to their blueline and I’m not sure it’s a good thing. Giving up Bokk to upgrade from Edmundson to Faulk doesn’t seem worth it to be honest. And the extension is… good for Faulk. Canes doing good work as usual.”

J.D. Burke: “The rich get richer. Dominik Bokk, a former first-round pick, has high-end puck skill and can finish. I’m not sure if he’s a game-breaking, blue-chip prospect with first-line upside, but middle-six seems feasible.”

Tom Dorsa: @jimmyhamrin on Bokk – McKeens Hockey: “ still has much to improve in his all-around game, but his pure skills are elite. His puck handling and creativity on the power play stand out. He has the offensive tools needed out of a top line forward in the NHL,”

STL acquires Justin Faulk (27 y.o.) and signs him to $6.5 mil x 7 yrs.
He was CAR’s sixth-best by WAR last year, owned the worst xG share among DEF, but facilitated offense very well and was a plus in both zone exits and denying entries against. pic.twitter.com/I4wbSre6aG

STL acquires Justin Faulk (27 y.o.) and signs him to $6.5 mil x 7 yrs.
He was CAR’s sixth-best by WAR last year, owned the worst xG share among DEF, but facilitated offense very well and was a plus in both zone exits and denying entries against. pic.twitter.com/I4wbSre6aG

The Blues acquire Justin Faulk and sign him to a 7-year extension. His biggest asset is his willingness to jump up in the play and provide offense. He’s not afraid to get deep in the offensive zone and has a bomb of a shot. #TakeWarning #STLBlues pic.twitter.com/oi3n4p5uYr