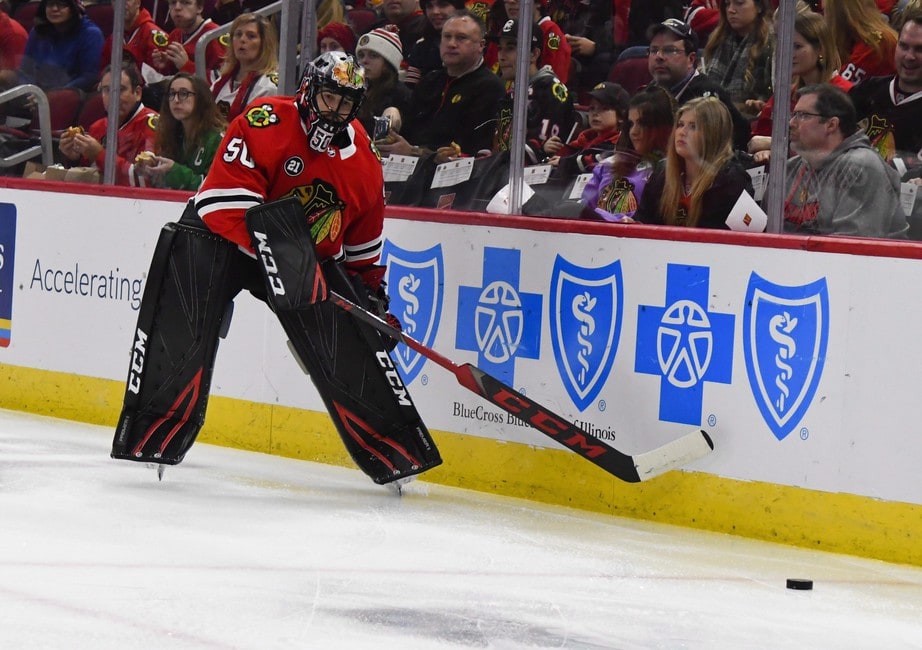 Much was made this past offseason as to what the signing of goalie Robin Lehner to a one-year, $5 million contract meant for the Chicago Blackhawks, and more importantly, for Corey Crawford. Is Crawford done? Are the Blackhawks moving on?

While those are all perfectly valid thoughts when considering Crawford’s recent injury history, the acquisition of the 2018-19 Vezina Trophy finalist is bound to benefit Crawford just as much as it benefits the Blackhawks.

The simple fact of the matter is this – when healthy, Crawford can stack the pads and stack the wins with the best of them. From his rookie season in 2010-11 through the 2016-17 season, Crawford averaged a .918 save percentage (SV%) and 2.34 goals-against average (GAA) while taking home two Jennings Trophies, awarded to the goalie with the fewest goals scored against. Even in his last two injury-afflicted seasons, the netminder had a .920 SV%, 2.60 GAA, and 4 shutouts in 67 games.

Time is working against the veteran goalie, however, as this year will be his age-35 season. In his first public comments since the Lehner acquisition, Crawford admitted to Ben Pope of the Chicago Sun-Times that his body “wears down a little bit easier as you get older…” (from ‘Crawford vs. Lehner is Blackhawks’ biggest competition, but it won’t be settled in camp’, Chicago Sun-Times – 9/14/2019)

This is where Lehner can be especially valuable. Nothing beats additional days off during the long grind of the season, especially for a goaltender like Crawford who has taken a pounding during his Blackhawks career.

It has been very difficult for the Blackhawks to find success when Crawford wasn’t in the net, but having a talented backup like Lehner means more days off and more rest for the starting goaltender. The former already says he feels like he’s back to his old self, now imagine if he can feel that good throughout the entire season. Whether that includes shouldering a heavy load as he has in the past or splitting duties with Lehner remains to be seen. Despite many questioning what’s left in Crawford’s tank, he believes he’s ready and knows what acquiring a player like Lehner does for the team.

“He’s a pretty easygoing guy and he’s a really good goaltender, obviously,” Crawford said. “That just helps our team. Some good competition between us and we’ll push each other to be at our best, so it’s a good situation for us.”

If there’s a goalie controversy brewing in Chicago, Crawford and Lehner aren’t letting onto it. Both players appear open to the competition and are ready to help push each other and push the Blackhawks back into the Stanley Cup Playoffs. How Crawford holds up is the big mystery, but the addition of Lehner definitely benefits the opportunity for added longevity and productivity to Crawford’s season.

Lehner Can Step in as Chicago’s New #1

While it’s anything but ideal, there is a very real possibility that Crawford’s injury history comes back to haunt him and this troubling trend could spell another long absence like his 2017-18 and 2018-19 seasons in which he only played 28 and 39 games, respectively. This led to a rotating carousel of goalies including Collin Delia, Anton Forsberg, Jeff Glass, Jean-Francois Berube, and Cam Ward that accounted for a cumulative .899 save percentage and a 3.56 goals-against average – not exactly inspiring numbers when Crawford wasn’t in the crease.

Lehner is coming off his best season as a pro, including a .930 SV% and a 2.13 GAA. While the defense in Chicago is a bit spottier than the 2018-19 New York Islanders defense that protected him last season, there is plenty of reason to believe he can carry that success over to the Blackhawks. As for his battle with Crawford, he’s more than happy to compete with the veteran.

“We’ve talked,” Lehner said. He’s a great guy and a great goaltender. This year, it’s a team that wants to make the playoffs again and we want to win, so you have to earn your starts and that’s what it’s all about.”

Crawford may be a fan-favorite that has helped carry the Blackhawks to the promised land multiple times, but it’s comforting to know that the team has a standout goalie on the roster waiting in the wings that can steer the ship should the injury bug bite Crow again this season.

The Scott Foster story and Collin Delia’s development as a potential goalie-of-the-future made for fun storylines, but the simple fact is that there may have been a lot of talent on the ice but there was not a lot of talent in the crease beyond Crawford and that consistently reared its’ ugly head during the last two seasons. Crawford and Lehner sound up for the challenge of pushing each other and battling for reps, and that should make for a fun season in the net for Chicago.