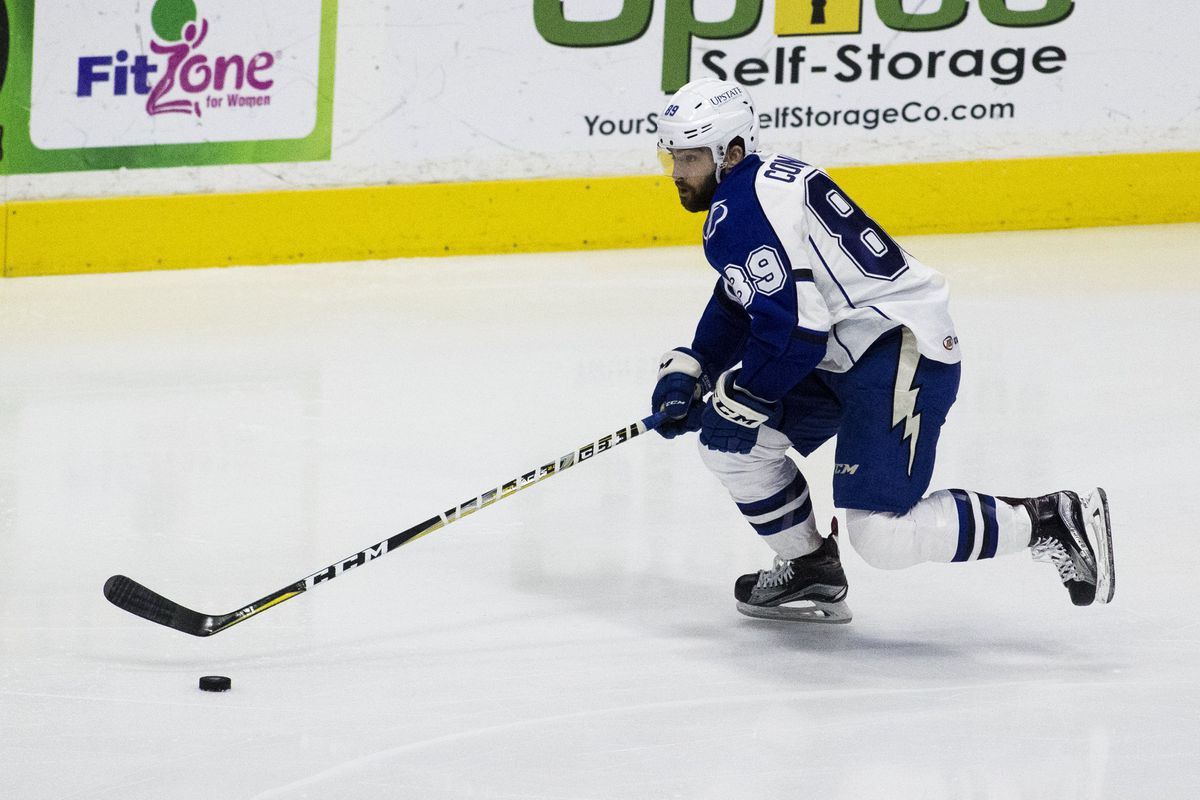 Syracuse, N.Y. — Syracuse Crunch forward Cory Conacher looked younger and as fit as ever following the team’s first practice of the season on Tuesday, and he was quick with an explanation why.

“I think my son keeps me young, too,” Conacher said. “He’s always on the move. I don’t have much time to sit around during the summer.”

One-year-old Callum Conacher definitely has fresh legs, certainly a good sign for a potential hockey career down the road.

And what about dad? Well, the answer for now is clearly yes. But in September, after a few months off from the physical demands of the sport, almost everyone responds in the affirmative. The wear and tear of a long season lies ahead, a new marathon that will dictate the futures of teams and players.

And Conacher is facing his challenge with a lot of tread on his skates.

The 5-foot-8 sparkplug enters this season staring at another large curve in a career that is coming around full circle. Somewhat unbelievably, the seemingly eternally youthful and energetic Conacher will turn 30 in December.

Just a blink ago he was a hungry unknown trying to prove himself with Norfolk in 2011-12, ripping up the AHL for 39 goals and 41 assists in sparking the Admirals to the Calder Cup. Now he is a hungry NHL/AHL depth player trying to prove that he still has enough talent left in his game to keep up with the much younger Lightning prospects who are now stocking the depth chart at his position.

Conacher, who produced 22 goals and 42 assists for Syracuse last year, apparently didn’t come close to meeting that challenge this preseason. He was among Tampa Bay’s first group of demotions and cleared NHL waivers.

That’s a foreboding start for an aging player who earned just one game with the Lightning last year, the fewest NHL contests Conacher’s played in a season since he made his debut at that level in 2012-13 (with the exception of a season played in Switzerland in 2015-16).

“I’m still part of the plan I guess, whether it’s up there or down here. Obviously I want to be up there playing and helping them out. But I want to play. It’s tough to go up there and maybe just be that odd guy out, sitting all the time. But it’s also tough to be down here. So there’s benefits and there’s pros and cons to being in both areas,” Conacher said.

“This is a good group of guys. I love coming back to Syracuse just because of the chemistry we have on this team. A lot of these guys have played together for a few years now. The young talent we have here is amazing. It’s probably some of the best in the league. So I think we’re all eager to get the season going. I want to be a big part of winning. I want to set high goals for myself whether it’s down here or up there and hopefully accomplish them.”

Conacher starts the season with a $700,000 consolation prize. That’s the worth of the one-way contract Tampa Bay general manger Julien BriseBois gave him when Conacher was shipped to Syracuse at the start of last season.

But while money is still important for a young family man, there is an extra edginess to the game of a player whose greatest value revolves around that attribute. If Conacher wants to earn more NHL-caliber money in the future, he knows this is the time to prove himself worthy of it.

Despite a productive season last year Conacher thinks he fell off a little at the end. He also was too undisciplined at times, compiling 95 PIM.

“I don’t know if it was maybe a little bit of frustration of not getting called up throughout the year. Maybe it was a lot of things. It’s hard to pinpoint,” he said. “I always am very hard on myself when I’m not playing well. I think some of the times I got a little too frustrated, whether it was with the refs or with myself and it just kind of, at times, it hurt my game. This year I’m looking to have fun and looking to help this team, whatever my role is. But I’ve got to just kind of lighten up on the distractions.”

Crunch coach Ben Groulx appreciates that Conacher is the type of vet who will play with the hunger required by this challenge.

“He’s a competitor. I think he wants to prove himself every time he’s on the ice,” Groulx said. “If you don’t try to get better, you regress. It’s the AHL. The AHL is a development league. It’s a development league whether you’re 20 years old, 24 years old, rookie, older guys. They all have goals. And I think it’s for him to make sure this year he’s got those goals set and he keeps motivated to achieve those goals. I think it’s easy to fall into the, ‘OK, am I an AHL guy now?’ But if you are an AHL guy, you still need goals to perform. I expect everyone on this team to still have the fire and the passion to go back in the NHL.”

And this is the time to start showing that again. Conacher’s hockey fountain of youth may not last all year, but there’s no part of the season when it runs deeper and stronger than it does right now.

“I still feel as good as I did back then (as a younger player). I love hockey,” he said. “I love playing in the summer. I love staying on the ice in the summer and then obviously love coming back to this group of guys here, whether it’s here or Tampa. The whole organization’s got a pretty tight-knit group. It’s exciting. It’s an exciting time of the year.”

Thanks for visiting Syracuse.com. Quality local journalism has never been more important, and your subscription matters. Not a subscriber yet? Please consider supporting our work