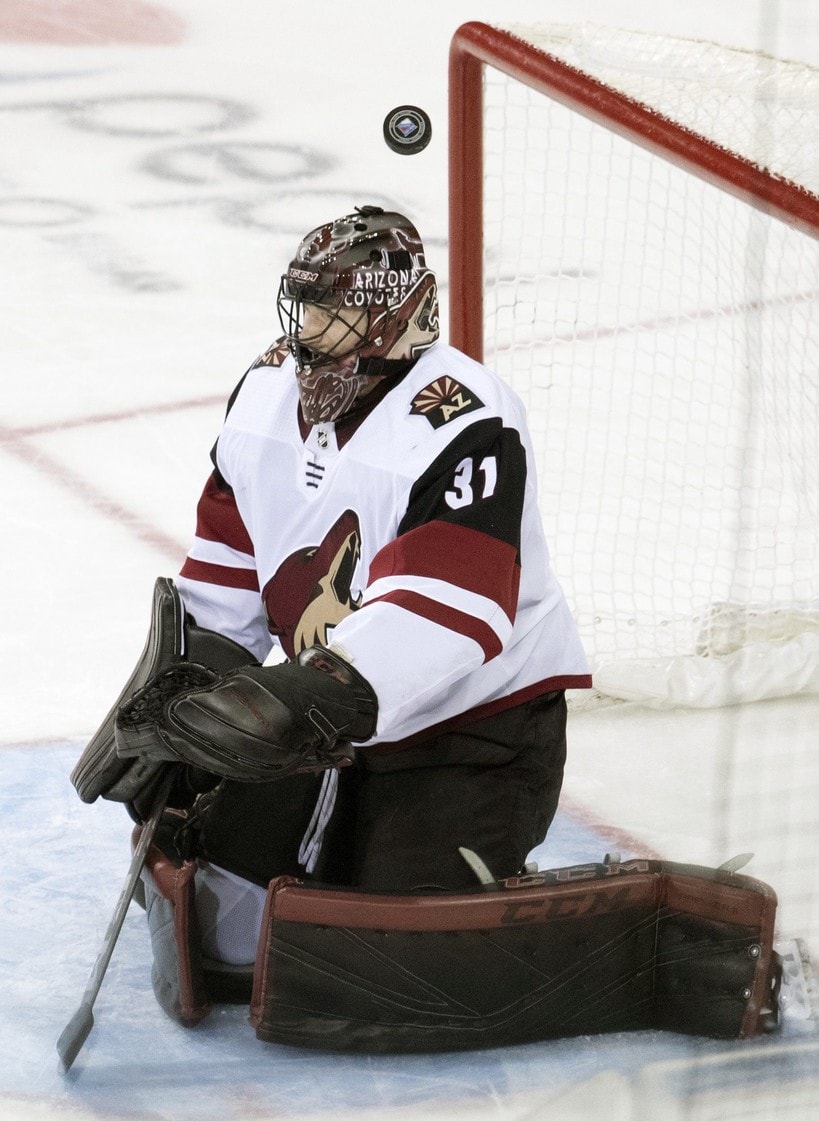 When the Arizona Coyotes selected Adin Hill as their 76th pick in the 2015 NHL Draft some would argue they saw their future No. 1 goalie. The 23-year-old Calgary native building a young core is something the club has been focused on and this has certainly been showcased each year at the draft.

Is Hill the Future?

Standing at 6-foot-6, 202 pounds, Hill’s presence is certainly felt when he’s in net and the Coyotes are well prepared for the post-Darcy Kuemper and Antti Raanta era. With both Kuemper and Raanta signed to multi-year contracts, Hill has time to focus on his development in the AHL with the Tucson Roadrunners. However, should the Coyotes be faced with a hole in the goalie position, he has proved he’s ready for the call-up.

When he debuted in the 2018-19 due to injuries of both Raanta and Kuemper, Coyotes fans were able to see a glimpse into the club’s future and certainly were excited by what they saw. Hill posted a 7-5-0 record, 2.76 goals-against average (GAA) and .901 save percentage (SV%).

Staying in the Desert

After spending time as the starting goalie with the Roadrunners, Hill made his NHL debut on March 13 against the Los Angeles Kings. Following this appearance, he had a chance to make an impression on Coyotes fans in his 13 NHL games last season, which included one shutout. He also had a solid performance last season with the Roadrunners, posting a 16-19-2 record, a .906 SV% and 2.61 GAA. Hill certainly showed he is a dynamic player who is playing at the top of his game.

This summer he got the security he was looking for by signing a two-way contract which is reportedly worth $762,125 at the NHL level. Coyotes general manager John Chayka seemed satisfied with the signing, “We are pleased to get Adin signed, he’s a big talented goaltender who has improved each season. We look forward to watching his development this year.” Now more than ever, Hill is focused on helping the Roadrunners find their identity this season and improving their overall record. Focusing on extending the season and improving the overall record of the team is something he and every player has in the back of their mind.

Next offseason the Coyotes will have a chance to lock in the young prospect after his contract expires following this season. There is no doubt that Hill will be looking to secure an NHL contract starting in 2020. There are still some lingering questions about where he should ultimately be spending the majority of his time in 2019-20.

Roadrunners GM Steve Sullivan spoke about how key it was to get Hill back from the Coyotes and how he envisions his future in the NHL, “We see Aiden as a potential No. 1 – a starter who could play 60-65 games in an NHL season.” The Coyotes goaltending staff echoed the importance of Hill staying in Tucson and working on his development, “He’s got to play…continue to work on his craft. So for us to have him up here as a backup goaltender to Kuemper, just doesn’t make sense.”

Coyotes fans can be confident about future goaltending because all signs point to Hill as the next No. 1 goalie. It’s only September and Coyotes fans have already seen him as he played a key role in the Coyotes’ 4-2 preseason victory over the Edmonton Oilers on Sep. 25, when he made 39 saves. Hill has a bright future with the Coyotes and this season will give him another opportunity to prove that he is the franchise’s next No.1 goalie.