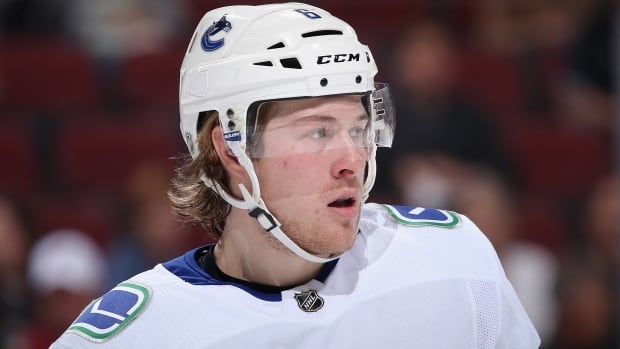 Vancouver Canucks forward Brock Boeser has been cleared to return to action after suffering a concussion last week, but he still believes the play that caused the injury was “pretty dirty.”

Boeser returned to full practice with his teammates on Monday, a week after he was hit from behind by Ottawa Senators forward Chris Tierney in pre-season play.

The 22-year-old Boeser went flying head-first into the boards, but said he didn’t initially feel much in the way of symptoms.

“And after a couple shifts I just went out there and the lights were just feeling a little weird, and I didn’t feel like myself, a little nausea,” he told reporters on Monday. “So that’s when I told our training staff I wasn’t feeling great and then I didn’t play any more after that.”

Boeser said it was his first concussion. He said the symptoms didn’t persist but his neck was sore for several days.

Boeser had three assists in the game before being hit on a Canucks power play. He been in similar situations along the boards many times before and hadn’t ever been levelled in the same way.

“I was in a bad spot there and I wasn’t expecting it at all,” Boeser said, adding that Tierney later reached out to apologize.

“He said he was sorry and he felt bad, and I appreciate that. But the hit itself, I didn’t like. I thought it was pretty dirty.”

Canucks defenceman Oscar Fantenberg was also placed in concussion protocol after being flattened along the boards in Vancouver’s 6-4 pre-season win over the Senators last week.

The 27-year-old Swedish defenceman lay on the ice in obvious discomfort for several minutes before he was helped off by a trainer. Ottawa’s Jordan Szwarz was called for boarding and handed a game misconduct for the play.

Canucks general manager Jim Benning said he spoke to George Parros, head of the NHL’s Department of Player Safety, about the plays that took out both players.

“[Parros] and his guys reviewed both hits and felt that it wasn’t worthy of a suspension,” Benning said. “So we have to trust his judgment on it. It’s scary for us when you have one of your best players get hit from behind and go flying into the boards. But he’s got a tough job, George does, and we respect his decision.”

Benning said both Boeser and Fantenberg will be available when Vancouver kicks off its season in Edmonton on Wednesday.

Boeser’s injury comes after he missed Canucks training camp amid prolonged contract negotiations. The restricted free agent finally joined his teammates after signing a three-year deal worth an average US$5.875 million per season on Sept. 16.

Despite missing so much time, Boeser believes he’s in a good position heading into his third full NHL season.

“I think I’m going to hit the ground running,” he said. “I thought I came into camp in good shape and I thought I got a lot better in that second pre-season game. I felt good out there and I just have to continue to build off that once the season starts.”