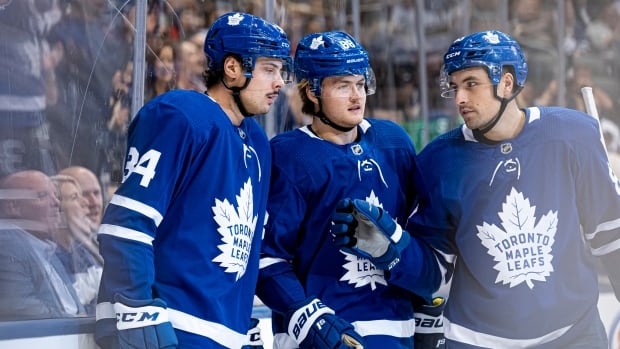 After consecutive playoff disappointments, Toronto Maple Leafs general manager Kyle Dubas said at the start of training camp he wants to see his team get better at dealing with adversity.

That will be key for a highly-skilled roster set to once again shoulder big expectations.

“Things are going to happen that we didn’t expect,” Dubas said. “If we want to continue to take the right steps, we have to weather those and keep the train rolling on the tracks because the rest of the league doesn’t stop.”

Toronto’s already had to put up with more than its fair share of adversity — and the games haven’t even started to count.

Camp kicked off with Mitch Marner’s contract impasse dominating headlines before the team and restricted free agent winger agreed on a six-year contract worth more than $65.3 million US.

Then with things humming along in a pre-season and legitimate jobs up for grabs, news broke last week that star centre Auston Matthews is facing a disorderly conduct and disruptive behaviour charge stemming from an alleged incident in his hometown of Scottsdale, Ariz., back in May.

None of the allegations have been proven in court.

Matthews kept his legal issue from the team for nearly four months — Dubas found out on Twitter — and has taken ownership of his handling of the incident’s aftermath, but the player has also been forced to answer a number of uncomfortable questions unrelated to hockey.

Auston Matthews and William Nylander looked to be in mid-season form while Frederik Andersen stopped every shot he faced in a 3-0 Toronto win over Buffalo. 1:17

“Obviously I made a mistake,” said the 22-year-old. “Everybody makes mistakes.”

Leafs head coach Mike Babcock, meanwhile, is in his fifth season with the club and it’s clear simply making the playoffs is no longer good enough.

The Boston Bruins have defeated Toronto in seven games in back-to-back first-round series. In 2018, the Bruins were clearly the better team, but the Leafs led the most recent matchup 1-0, 2-1 and 3-2 before losing on home ice with a chance to clinch in Game 6. Boston then won Game 7 at TD Garden.

“We need to take a step forward,” Matthews said. “The Achilles heel has always been that first round for us, so just trying to get over that hump. It’s tough to measure a successful season without reaching that ultimate goal and accomplishing it.

“It’s been frustrating the last two years — same team, same result. For us, [it’s] just making sure that everybody’s just really focused and dialed in.”

Last season: 46-28-8, lost in first round of the playoffs to the Boston Bruins for the second straight year.

Key players: Auston Matthews — The star centre was flying high after signing a five-year, US$58-million contract extension that kicked in July 1 before the disorderly conduct and disruptive behaviour charge came to light. Matthews has missed 34 games with various injuries over the last two seasons. If he can stay healthy, Matthews could get to 50 goals for the first time in his career.

John Tavares — Toronto’s quiet leader found instant chemistry with Mitch Marner last season after inking with the Leafs in unrestricted free agency. The 29-year-old centre registered career-highs with 47 goals and 88 points, but his calm demeanour is also important on a young team still trying to break through.

Frederik Andersen — Set to turn 30 on Wednesday, the Leafs’ goalie has started at least 60 games in each of his three seasons with Toronto. Andersen allowed just one goal in exhibition play after struggling with a nagging groin injury for stretches of last season. There’s no doubt the Leafs can fill the net, but with a defence corps sporting some new faces, Andersen’s health will be key.

The big question: Can the Leafs take that next step? Toronto certainly has the talent up front, but how a new-look blue line meshes could go a long way in determining the Leafs’ fate. Tyson Barrie came over as the centrepiece of the Nazem Kadri trade with the Colorado Avalanche and, along with Morgan Rielly and rookie Rasmus Sandin, should help get the puck up to the likes of Matthews, Tavares, Marner and William Nylander even quicker.