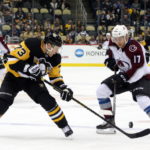 Would the Canucks be interested in bringing Schenn back?

Satiar Shah: Have heard that the Vancouver Canucks could put a waiver claim on defenseman Luke Schenn. The Canucks potentially have a spot open after putting Alex Biega, Sven Baertschi, (and Nikolay Goldobin) on waivers yesterday.

Brett Cyrgalis of the NY Post: The New York Rangers are nearing a two-way contract with 33-year old winger Micheal Haley. He’s been in the Rangers camp on a PTO.

“You just look at Saturday night, and some of the different types of things you need in hockey,” general manager Jeff Gorton said. “He brings a different blend of something we need more of. His competitive edge, and his ability to warm the ice and maybe change the complexion or make a difference with a check or being physical.

“So just having that guy in the organization, a guy like Micheal, I think will help us — our team, our kids, our group.”

Defenseman Brendan Smith appears to be sticking with the team to start the season. He could have hit waivers yesterday to save a little money towards their cap. Being able to play forward as well helped his cause. He is under contract for next year as well at a $4.35 million cap hit.

Are the Penguins and Avalanche talking trade?

Paul Bissonnette on his Spittin’ Chiclets podcast said that he’s been told that the Avalanche would acquire defenseman Jack Johnson and some extra assets from the Penguins.

Dater has said that the Avs are looking at young guys though. Johnson is 32-year old with four years on his contract. He has a cap hit of $3.25 million. A buyout at the end of the season would carry a $916,000 cap hit for six years.