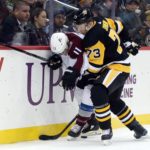 Adrian Dater: Have been hearing that the Colorado Avalanche are looking for some organizational goalie depth. Two potential targets could be Pittsburgh Penguins Tristan Jarry and Winnipeg Jets Eric Comrie.

A Penguins trade could happen soon

Josh Yohe of The Athletic: A source who works for the Pittsburgh Penguins and another league source were both told on the weekend that Penguins have many potential trade options on the table. The majority of these potential trades involve defenseman Jack Johnson.

A trade isn’t 100 percent certain but it could happen in the next 48 hours (the article was posted yesterday).

One source said that a Johnson trade before the start of the season is around “75 to 80 percent chance.”

The Penguins need to get under the salary cap ceiling as they are around $400,000 over. Johnson carries a $3.25 million cap hit for the next four seasons.

Though trade details aren’t known, it’s believed that there are two teams are willing to take on his contract.

Rutherford on the play of Tristan Jarry and Casey DeSmith this preseason and if they’ll need to trade one.

“Part of what will dictate this decision will be the interest in one of them and how it plays out within our cap, which is very tight, as you know.”

On if the Penguins have made any decisions with Jack Johnson and his future with the team.

“No. In the meetings that I have with the coaching staff, they like what he does. They believe that he can do some things that other guys don’t do as well such as penalty killing and things like that. We’re going to have to do something with our defense because we like the way Marino has played. When you look at the cap and you look at the numbers on defense, we have to do something. But it doesn’t necessarily have to be Jack.”