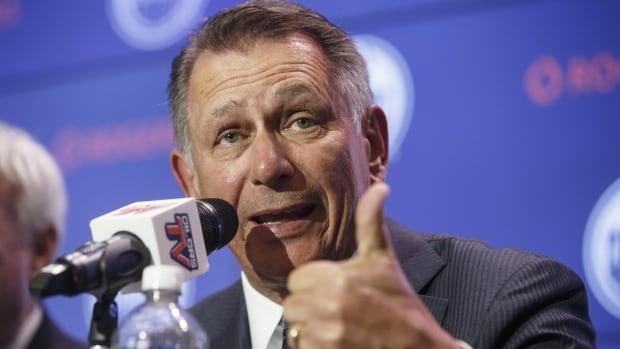 With the woebegone Edmonton Oilers set to open their NHL season Wednesday, new general manager Ken Holland bristled when it was suggested fans are being told to be patient for a playoff contender.

“Our goal is to put some veteran players on the bottom part of the roster and compete for a playoff spot.

“We’ve got a nucleus of players. We need to surround them better.”

And don’t mention the R-word: Rebuild.

“I’m talking about we’ve got to compete for a playoff spot. Did we make the right moves? Certainly the answer is in an 82-game season.”

WATCH | Where do Oilers rank among Canadian NHL teams?

Rob Pizzo looks at which teams have the best chance to win Canada’s first Stanley Cup since 1993. 3:43

While Holland was hired away from Detroit less than five months ago, the team that will take the ice at Rogers Place against the Vancouver Canucks on Wednesday already has his fingerprints all over it.

It’s part of a multi-level approach to fix a team that has missed the playoffs 12 of the last 13 seasons despite having two of the best scorers in the league: Connor McDavid and Leon Draisaitl.

The Oilers open the campaign with a number of new veterans in the forward ranks, including Europeans Tomas Jurco, Joakim Nygard, Markus Granlund and Gaetan Haas along with NHL journeyman Josh Archibald.

It’s a risk, given that Nygard and Haas have no NHL experience, while veteran plugger Sam Gagner has been dispatched to the American Hockey League.

Their task is straightforward: fulfil hockey’s Hippocratic oath and first do no harm.

“We wanted to get more pros on the bottom part of the roster,” said Holland. We wanted to bring some different dimensions, penalty killers, some speed,” he said.

Yet to name starting goalie

Head coach Dave Tippett would not say Tuesday who would start in net versus Vancouver.

The offence has been written in pencil of late, with last year’s linemates McDavid and Draisaitl on different lines.

McDavid, who looks fine recovering from a knee injury, centred Nygard and veteran James Neal in practice Tuesday while Draisaitl was on the wing beside centre Ryan Nugent-Hopkins and Zack Kassian.

On Monday, Jurco was in Nygard’s spot beside McDavid while Draisaitl centred the second line and Nugent-Hopkins ran the third.

Tippett said the changes were because Jurco needs a medical procedure and won’t play Wednesday.

“[McDavid and Draisaitl] will still play some time together,” said Tippett.

On defence, Adam Larsson and Darnell Nurse are the top pairing. Ethan Bear and Oscar Klefbom are No. 2.

“There have been a lot of new voices [and] new faces,” said Larsson.

“So far it’s been a hard camp. It’s been a good pace, lot of positive energy. We have to carry that over to the games, and it starts tomorrow.”