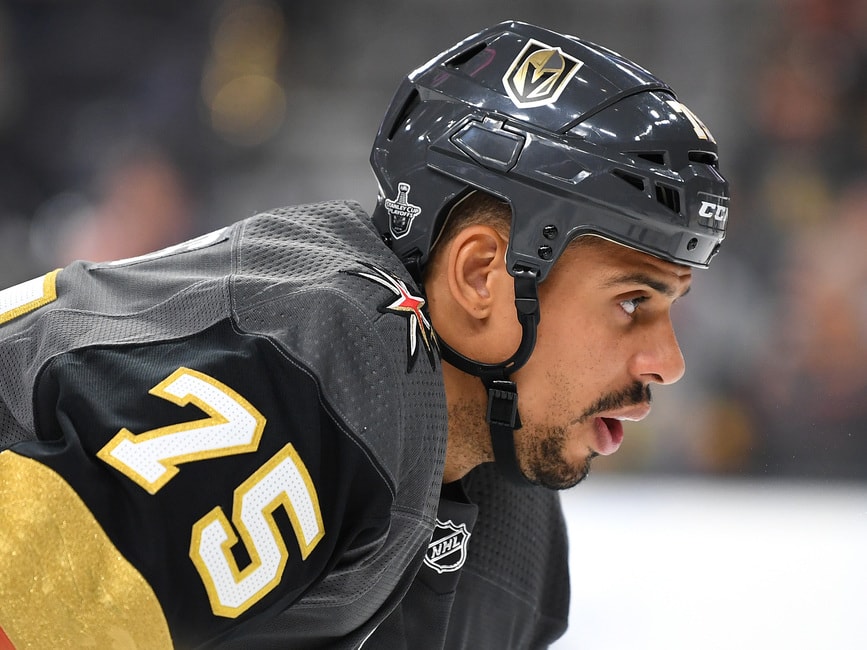 Birds sing their morning songs with more melody. The colors of the rainbows appear more colorful. Stars twinkle that much brighter in the midnight sky. The bromance continues to brew between Ryan Reaves and Evander Kane. And it’s showing no signs of letting up.

Reaves, at 6-foot-2 and 240 pounds, is always willing to drop the gloves. The bruising Vegas Golden Knight winger has built a reputation on playing a physical game, always ready to stand up for his teammates. The fourth-liner has averaged 8:21 of ice time per game and has topped 20 points in a season only once in his career.

Evander Kane, has amassed 410 points in 649 games since breaking into the league in 2009. He’s named after former World Champion Evander Holyfield, and is a big fan of boxing. Kane will take on anyone, even when he gives up size and weight. The San Jose Shark plays a fearless, aggressive, reckless style.

The two players have been going the rounds for years, both in verbal jabs and literal fisticuffs. Kane has 20 career fights (regular and postseason) versus 67 for Reaves. That said, they had never fought one another until the playoffs last season.

It’s fair to say Kane and Reaves aren’t best friends. Their relationship dates back more than a decade when they briefly overlapped in the WHL during the 2006-07 season. Reaves played for the Brandon Wheat Kings and Kane suited up for the Vancouver Giants.

While in the NHL, the two players have had their fair share of run-ins over the years. Whether they’re yipping and yapping with their mouths or jabbing and face-washing one another with their gloves, their mutual dislike for one another has been constant.

In a 2017 matchup, when Kane was with the Buffalo Sabres and Reaves was playing for the St. Louis Blues, they shared several love taps. Then, back in March, Kane, a 30-goal scorer, called Reaves, a fourth-line pugilist, a “babysitter.”

“I’ve got to be the highest-paid babysitter in the world if that’s true,” said Reaves with a smile. “I guess I know what he’s saying. It’s a bad chirp. He can’t come up with anything new, so he’s sticking to the one line.”

Let’s Get it On

Last
spring, before Game 3 of the first-round Stanley Cup playoff series between the
Golden Knights and Sharks, Reaves called out Kane for not wanting to take him
on when the Golden Knights winger was on the ice.

“Kane gets 10-feet tall when I’m not on the ice, and when I’m out there, he doesn’t seem to do much,” chirped Reaves. “That’s how he’s been every time I’ve played him in my career. I don’t expect it to stop.”

The two rough-and-tumble forwards finally dropped the gloves in a heavyweight tilt near the end of regulation, each throwing haymakers. “That was nine years waiting for it, so that was fun,” Reaves said of the fight with Kane. “I just don’t like the guy.”

Reaves appeared to have connected a few times, but it wasn’t enough to drop Kane who fought back and stood his ground. Later, Kane responded to Reaves’ words by saying, “He looked pretty short to me when he hit the ice at the end of the game. He wasn’t much more than a foot tall.”

Do You Know the Muffin Man?

After their tussle, in which Reaves landed on Kane when they fell to the ice, the feisty Shark shared his thoughts. “For the so-called toughest guy in the league, I don’t know if he landed a punch,” said Kane. “At times, I thought I was fighting the Muffin Man. I expected more of a battle.”

Related: The Best Nicknames in Hockey

“For a guy who plays three
and a half minutes a night, he sure does a lot of talking,” said Kane matter of
factly. “I think he thinks it’s the WWE. He’s probably going to end up there
pretty soon with the way his game looks. Another year left in his deal, I’m
pretty sure Vince McMahon will be giving him a call pretty soon.”

Teammates Get in on the Chirping

The chirping between Kane and Reaves has extended to their teammates. When Kane’s fellow Shark, Joe Thornton, was asked about his hit on Golden Knight forward Tomas Nosek in the head, earning a one-game suspension, he changed the subject and backed Kane. “For a 30-goal scorer, boy he looked good in that fight,” said Thornton. “It was just tough to see Ryan go down like that versus a 30-goal scorer, but hopefully he’ll have better luck next time.”

Reaves counter-chirped. “I’ve got a buddy with a grandpa who’s going through the same thing,” Reaves deadpanned. “He can’t really see very well because he’s getting old. Get some glasses or something. I don’t know. If he gets suspended, it’s going to be hard for him to see up top [from the press box].”

Kane wasn’t about to let that go unanswered. “To
chirp Jumbo’s vision… a guy who has over 1,000 assists, that doesn’t seem too
bright. One of the best passers and best guys with vision on the ice to ever
play the game. Just shows a lot about his hockey knowledge and hockey IQ.
Clearly it’s lacking.”

Winning on the Scoreboard

The
Golden Knights won the game 6-3, taking a 2-1 series lead. They won the next
game, too, for a commanding 3-games-to-1 lead. It looked like they were rolling
toward the next round, but the Sharks apparently didn’t get that memo.

Team
Teal strung together three straight wins to take the series in an exciting
seven games. The highlight was roaring back from a 3-0 deficit in the third
period of Game 7 to bounce the Golden Knights. The Sharks fell in the Western
Conference Final, losing to the eventual Stanley Cup Champion St. Louis Blues.

The Fire That Burns Between Them

The
most recent verbal jab thrown was initiated by Reaves. A few weeks ago in Las
Vegas, he presided over a hockey-themed wedding and opened the ceremonies
by firing a shot at Kane.

It didn’t take long for Kane to counter,
responding with a shot back at the newly wedding officiant.

Last season, Kane led the entire league in penalty minutes. He was whistled for a total of 153 minutes, 25 minutes more than the next closest player (Tom Wilson of the Washington Capitals with 128 minutes). Despite his time in the sin bin, he finished tied for 79th in points among all skaters. On the other knuckled hand, Reaves was called for 74 penalty minutes and was tied for 381st in scoring.

“To be honest, he owes me a lot of credit for getting his name out in the media so much,” said Kane of Reaves. “Nobody thinks of Ryan Reaves as a hockey player or talks about him,” said Kane. “Apparently he’s been after me for nine years. Every time I’ve talked to my agent or the general manager, I’ve never been told that they’re giving me a contract to go out and fight clowns like that.”

The NHL schedule-makers may have fueled the fiery lovefest between Reaves and Kane. The Sharks and Golden Knights open the season with back-to-back games against each other. Expect sparks and chirps to fly between the contentious rivals.