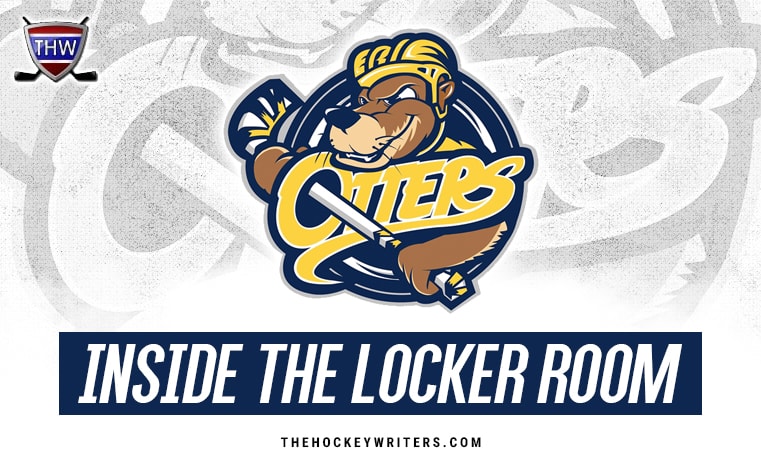 In this week’s edition of Erie Otters’ “Inside the Locker Room”, Dr. Hartsburg updates us with all the latest injury news. There’s finally some good news on the horizon. We also hear from the coach about this past weekend and what they’re focusing on at practice and in their next set of games. We are also joined by forward Austen Swankler as he discusses adjusting to the OHL. Cameron Morton also stops by and we get to know him a little more as he will be thrust into the Otters’ top-six thanks to the injury situation. Here is last week’s edition in case you missed it.

The Week That Was

Brendan Kischnick is the new add to this week’s injured list. He took the worst of a hit along the wall on Saturday night and couldn’t put any weight on his leg when helped off. Coach Hartsburg said they were waiting on some more information in regards to an exact time frame and prognosis. But he is week-to-week so the injury is severe enough that he will have to miss games. Cameron Morton is expected to play in his place as the sixth defenseman along side Luke Beamish.

But some good news. Noah Sedore, Danial Singer and Hayden Fowler should be ready to go Friday barring any setbacks. Considering Morton played forward on Saturday, this is welcomed news. Unfortunately, Matthew MacDougall is still not ready and will miss the next two at least.

Cameron Morton: Come On Down

With injury comes opportunity. Because of Kischnick’s injury, newcomer Cameron Morton will get an extended look in the Otters’ top-six. He obviously impressed in camp beating out former alternate captain Ryan Martin for a roster spot.

So who is Morton? In case you haven’t seen him before, he gives us a glimpse of what we can expect.

“I’m definitely a hard worker. That’s how I earned my spot here,” Morton said. “Last year I went back to major midget and I worked my butt off to get here. I’m not much of a skilled guy. I’m really defensive. I’m a good puck mover. I also throw the body when I have to.”

So what does he have to do to be prepared for what’s coming in a full-time role?

“I definitely have to get myself mentally prepared for games. It’s going to be a big jump from last year with the play coming from major midget. I know the coaches are going to help me a lot in practices, getting me to work hard, helping me understand what I have to do in games to help us win.”

Morton is getting a crash course in what it will take to win. The one thing we know we’ll get is a tireless work ethic. The fans will comes to embrace him in no time.

With five points in his first five games with Erieincluding his first OHL goal, Swankler is off to a nice start but he’s knows there is so much more to learn in becoming a complete player. He spoke with us about his early play and more.

“It’s definitely taken a toll on my body,” Swankler said. “You know, playing three in three this last weekend, trying to get back into the motion of playing everyday. During the week, with practice, get good stretching in, eat the right foods and get enough rest. Especially after games, get the right liquids and food and make sure you are ready for the next day.”

How different are the games in the OHL compared to before? Swankler noted some key differences.

“With London, it was more strategical, looking where the passes are going, finding open ice, stuff like that. As you get older, you have to think more and use your speed in finding lanes and using your body to play the game. The game is getting a lot faster and stronger.”

And the Otters are focused on making Swankler a complete player, not just someone who can get good stats.

“Becoming a center in this league is definitely more difficult. You’re coming back more. You’re helping your defenseman. That was one of the things I struggled with was playing defense, coming back in the zone and getting the puck out. Here in Erie, the coaches are definitely helping me with coming back into the zone and working to help out my D. I’ll have more chances to get points if I learn the defensive side of the game first.”

Hartsburg offered his early assessment of how Swankler has handled things.

“From a skills standpoint, it’s been a relatively easy adjustment for him just because he’s a talented player. But you have to learn the consistency of being a complete player. It’s something he really hasn’t had a whole lot of. Those kids (in midget) can get by on those numbers and the skill set. Once you get to the higher level, you have to add elements to your game. Right now, Austen is playing center where he didn’t play really at all last year. It’s making sure details of being a centerman are there especially in your own end. For him, it’s consistently working and skating. He’s working and there’s no fear in his game. But when he’s not around the puck, he’s working to get into that five-foot radius as opposed to that 10-15 foot area.”

Getting Sedore, Singer and Fowler back comes at a perfect time for the team with the Saginaw showdown coming Friday. This will be Sedore’s season debut. Singer and Fowler should resume playing in their top-six roles.

As for the goalies, Hartsburg usually doesn’t divulge that during the week. But given the way Daniel Murphy has started the year, it’s not out of the question for him to get both games. I’d expect he start Friday vs. Saginaw and we’ll see where it goes.