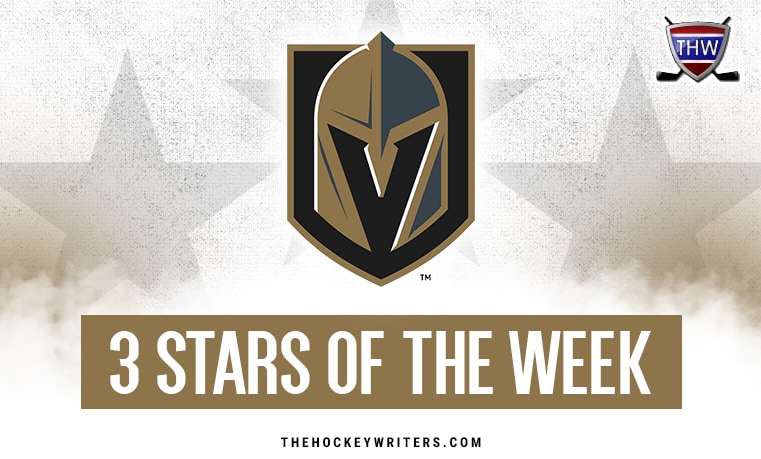 Welcome to the 3 Stars of the Week segment. This will be a weekly post where I pick the Vegas Golden Knights’ three stars from the previous week. The first star will receive five points, the second star will receive three points, and the third star will receive one point. Points will be tallied throughout the season and one dollar per point will be donated to the charity of the winner’s choice at the end of the season.

The Golden Knights went 2-2 during the second week of the season and sit at a 4-3 record. They had a rough go against the Arizona Coyotes, but their offense woke up against the Calgary Flames and Los Angeles Kings as they outscored them 11-4. A couple of quick goals and a bad Marc-Andre Fleury turnover in the second period of the game against the Nashville Predators killed any momentum they had as they finished the week with a 5-2 loss.

There were still a number of bright spots throughout this second week and once Nate Schmidt returns from injury, the team’s overall defense will be better. Here are the three stars from the past week.

Nosek does not have the offensive stats to be recognized as a star, but the little things he does on the ice do not go unnoticed. Five-on-five he centers the energy line, playing with Ryan Reaves and William Carrier. They don’t receive a ton of minutes, but when they are on the ice, they make it count. Reaves led the league in hits and when him or Nosek scored a goal last season, the team’s record was 12-2-2.

He is also a big part of the Golden Knights’ penalty kill. They are third in the league with a 92.6% kill rate and have only allowed two power-play goals in seven games. Winning 58% of the draws is a big reason for their success. That means they are starting out with the puck and are able to set up a quick breakout to score a shorthanded goal or can clear the zone right away, not allowing their opponents to set up.

I have a feeling you’ll be seeing Stone’s name on this list a lot this season. He does it all. He can score, play defense and will even answer the bell when rung. Tuesday against the Nashville Predators, Stone fought their captain, Roman Josi. Josi did not like a hit that Stone laid on Filip Forsberg earlier in the period, so this was his chance to stick up for his teammate. Stone only has three career fights in the NHL, but he looked like a natural in this one.

Much like Nosek, Stone is a big part of the team’s penalty kill as well. He thinks the game on a different level and can predict where the puck is going to be. Last week he averaged over two minutes on the penalty kill and over three on the power play. He drives the bus at both ends of the rink and currently leads the team in goals and points and is in line for a monster season.

The first star of the week goes to Paul Stastny. He has three goals and three assists over his last three games. Coincidentally enough, that is when Cody Eakin returned from injury. Having Eakin back in the lineup lets Stastny move up to the second line and play with Stone and Max Pacioretty. Having better linemates opens up more ice for him and gives him the opportunities to make plays.

He has also helped make the power play a lot better as they are sixth in the league at 29.2%. He is 56% in the faceoff dot, allowing the Golden Knights to set up in the zone right away. In his two power-play goal performance against the Kings, he was set up in the slot and with his quick release was able to finish off tic-tac-toe plays to get on the board.

The Golden Knights have one more home game before they hit the road for three games next week.

I will keep a tally of the points all season long and donate a dollar per point to the winner’s charity of choice at the end of the season. Stay updated all season long by following me on Twitter, @LAM1926, to find out who will be next week’s three stars!