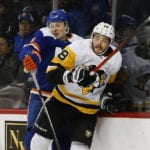 Galchenyuk could be on the move again

Sportsnet: Elliotte Friedman said on Sportsnet that Pittsburgh Penguins forward Alex Galchenyuk could be on the move.

“I do think Buffalo was one of the teams that looked at him,” Friedman said during the Headlines segment of Hockey Night in Canada. “I’m sure there’s more. But Galchenyuk is someone who could be finding a new home.”

Michael Augello: Elliotte Friedman on Sportsnet 590 on the Toronto Maple Leafs backup situation: “They’re in a really tough spot, but I find it impossible to believe that they haven’t looked into (dealing for a goalie).”

Rory Boylen of Sportsnet: Brian Burke on the Sportsnet 590 said that Maple Leafs may need to pay up to get a backup goalie.

“It’s beyond price. You’re going to have to overpay. And I would do that — and if Kyle does that I will not criticize him,” Brian Burke told Sportsnet 590 The Fan’s Good Show. “If he has to give up a second-round pick or a good kid to solve this issue… because this is their Achilles heel. This is a fatal flaw for this team making the playoffs, if they don’t address this.”

The Maple Leafs have little salary cap space and are limited on what they can acquire. Looking at some potential backup options for the Maple Leafs

Below $1 million and in the NHL – Alexander Georgiev (Rangers), Tristan Jarry (Penguins) and Jack Campbell (Kings).

Casey DeSmith (Penguins at $1.25 million) and Collin Delia (Blackhawks at $1 million) could be other options.