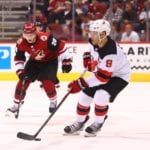 Sportsnet: Chris Johnston said on Sportsnet that they believe the Arizona Coyotes are the frontrunners to acquire New Jersey Devils forward Taylor Hall.

Hall was scratched for precautionary reasons on Friday against the Avalanche and last night against the Coyotes.

“It’s a bit of an unusual situation because the Devils are playing in Arizona,” Johnston added. “… We know that Florida has been involved in some trade talks, St. Louis, a couple other teams. But we believe the Coyotes have the best offer on the table right now.”

Elliotte Friedman added that it’s believed that two of the Coyotes’ top prospects are not involved.

“From the information we’ve gathered, we don’t believe the Coyotes two top prospects, Barrett Hayton or Victor Soderstrom, are in that offer,” Friedman said during Headlines. “It sounds like what the two teams are haggling about, or the player they’re haggling about, is Kevin Bahl.”

The Devils may be using the Coyotes offer, along with making Hall a healthy scratch to entice more offers.

David Pagnotta: Have been hearing that the Coyotes could be in the lead for Hall. A deal could be nearing completion.

Mike Morreale: The Coyotes have both their first and second round picks this year and next. They also have some nice defensive prospects that might interest the Devils – Toms River, Cam Dineen and Kevin Bahl.

Pierre LeBrun: Have been hearing that the Florida Panthers have checked in with the Devils. There are about five or six teams in the mix.

Patrick Johnston: Have to think that the Coyotes are offering up picks galore for Hall. A league source said that the Panthers offer for Hall included Vincent Trochek and some Boston area prospects.

Jimmy Murphy of Boston Hockey Now: The Boston Bruins are one of the teams interested in Taylor Hall but they are not optimistic about landing him.