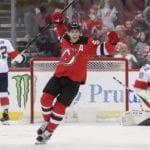 Latest on the Taylor Hall situation

Pierre LeBrun: Things can always change, but have been hearing this morning that the Florida Panthers are no longer in the mix. Their interested in Hall may have been tied to the idea of being able to, or thinking they could sign him to a long-term extension. The price is too high for the Panthers for a rental.

Pierre LeBrun: Now if the price for Hall comes down, the Panthers could get back in the mix.

Have been hearing that other teams are hoping to get some sort of an answer from the Devils soon. They don’t want this to drag on for too much longer.

Jim Matheson: “With regard to Hall trade we should remember that Ottawa traded winger Mark Stone to Vegas last season and only got a 2nd round draft, F Oscar Lindberg (playing now in Switzerland) and prospect D Erik Brannstrom. And Vegas knew they could sign Stone.”

Elliotte Friedman of Sportsnet: Chris Johnson and others said over the weekend that the Arizona Coyotes were the frontrunners. Multiple sources saying they Coyotes weren’t offering up Barrett Hayton and Victor Soderstrom, and may have been haggling over Kevin Bahl.

A few sources have said that the Devils may have an offer or two that involve current roster players – younger players under control.

As of Saturday night, no teams had been given permission to speak with Hall or agent Darren Ferris about an extension. has said several times that he doesn’t believe Hall will sign an in-season extension.

Hall sat out games against Avs and Coyotes on Friday-Saturday, but what if he’s not moved by their game on Wednesday?

The asking price for Hall is likely a high draft pick, a conditional pick if he signs a contract extension, and a top prospect (or a solid prospect or two if they can’t get a team’s best prospect).

Arizona Coyotes – The Devils should be trying for defensive prospect Victor Soderstrom. Kevin Bahl and Kyle Capobianco could be other options. If looking at goalie prospects, the Coyotes have Ivan Prosvetov and Adin Hill.