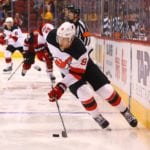 The Arizona Coyotes have acquired Taylor Hall and Blake Speers from the New Jersey Devils for a 2020 conditional first-round, a conditional 2021 third round pick, Kevin Bahl, Nick Merkley, and Nate Schnarr.

The Devils will retain 50 percent of Hall’s salary.

Frank Seravalli: “The condition on the 2020 1st round pick to #NJDevils is lottery protected. If #Coyotes miss the playoffs and that pick ends up in the top three spots, it slides to 2021.”

David Pagnotta: Coyotes GM John Chayka: “Taylor Hall is one of the elite talents in the game today; a Hart Trophy winner, high-end playmaker & one of the NHL’s most talented forwards. We are beyond thrilled to add Taylor to our team as we continue in our mission of bringing a Stanley Cup home to Arizona.”

Cap Friendly: “The #Coyotes are a team currently utilizing LTIR. LTIR teams do not benefit from cap hit pro-rating, full season cap hits are used. With 50% retained of Hall’s $6M cap hit by the #Devils, the #Coyotes will absorb his new $3M cap hit with their LTIR relief”

The 28-year old Hall was drafted first overall in the 2010 draft by the Edmonton Oilers. He carries a $6 million salary-cap hit and will be an unrestricted free agent after the season.

The 22-year old Speers was drafted 67th overall in the third round of the 2015 draft.

The 19-year old Bahl was drafted 55th overall in the second round of the 2018 draft.

The 22-year old Merkley was drafted 30th overall in the first round of the 2015 draft by the Coyotes.

The 20-year old Schnarr was drafted 75th overall in the third round of the 2017 draft. by the Coyotes

Thoughts from the media

Craig Morgan: “The Coyotes are still interested in re-signing Hall this summer. As has been reported multiple places, agent Darren Ferris prefers to get his clients to July 1 to explore the market.”

Larry Brooks: “Devils got quantity. I’d have gone for quality. If one-for-one, so be it, but here’s NJ, with one playoff appearance and one playoff game victory since 2012, right back in the rebuild morass. Rangers may have gotten more quality for Hayes and Nash.”

Darren Dreger: ‘Hall will likely test the free agent market, so this could be a pure rental for Arizona. However, Hall’s agent, Darren Ferris will listen to extension options if the Coyotes present them at any point.”

Shawn Simpson: ‘Taylor Hall is such a great athlete, and this makes the Yotes a better team. Gotta love the speed, size, and skill. Only concern long term is the hockey sense and tunnel vision.”

Dan Rosen: “John Chayka took hits to building the Coyotes to what they look like today — speed, skill, a strong mix of veterans and young players backed by elite goaltending. ARZ graduated prospects to NHL, kept building strong base, now adds a top player w/o giving up its best prospects.”

Daniel Nugent-Bowman: “A lot of assets heading to NJD from ARI in the Taylor Hall trade. Quantity for sure; I’m not sure about quality other than the first(s). Hall now heads to an Oilers’ divisional rival. Edmonton can still try to sign him as a UFA in July — if he hits the open market.”

Cam Robinson: “While there isn’t an A-rated prospect involved, this is a solid pull for NJ • Bahl is a quality LD prospect who has top-4 upside • Merkley has some upside as a skillful winger • Schnarr looks like a real middle-six C down the line • + 1st and 3rd-rounder For a rental.”

Jim Matheson: “Ariz feels they’ve got enough small F’s in Keller and Garland so Merkley was expendable. They kept their best D prospect Victor Soderstrom and gave up the six-foot-7 Bahl.”