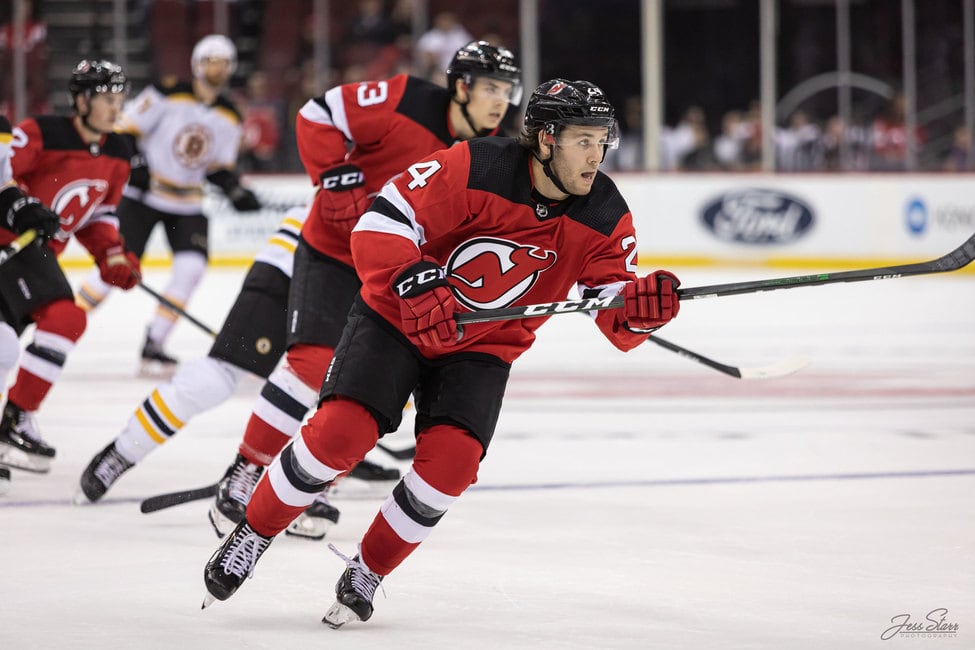 Things may not be going well for the New Jersey Devils at the NHL level. But rest assured, there is reason to be optimistic. The 2020 World Junior Championship (WJC) begins on Dec. 26, and the Devils will have five prospects in attendance representing four different countries. Defenseman Ty Smith headlines the group, along with the recently acquired Kevin Bahl. But there are a few other lesser-known Devils’ prospects looking to make waves with strong performances of their own.

The reigning CHL Defenseman of the Year and the Devils’ top prospect makes his return to the WJC for Team Canada. He played in each of Canada’s five games last season and recorded three assists. This time around, he’ll be playing a top-pair role alongside Jared McIsaac, a 2018 second-round pick of the Detroit Red Wings.

Most people, including myself, expected Smith to be playing in the NHL this season, given he had 69 points in 52 games for the Spokane Chiefs (WHL) in 2018-19. But he had a tough preseason and was returned to the Chiefs for one last season in juniors. His counting totals may be down (17 points in 21 games), but he’s improved his defensive game and is working towards being a top-pair defenseman in the NHL. He’ll be thrust into that role this week, so we’ll see how much improvement he’s made against the best players among his age group.

Bahl has only been a Devils’ prospect for about a week, as he was acquired by them when they traded Taylor Hall to the Arizona Coyotes. He was a Coyotes’ draft pick in the second round of the 2018 Entry Draft and is an imposing defenseman, as he stands at 6-foot-6, 229 pounds. Most players his size aren’t great skaters, but that’s an area of his game he’s improved significantly since his draft year.

Bahl isn’t the most gifted offensive talent, but he can move the puck effectively in transition. He’s practiced among Canada’s top four in the lead up to the tournament, and he should start there once games begin. Chances are he’ll play a significant role for the Canadians and will be called upon when it’s time for them to close out a game.

Pasic was a seventh-round choice (189th overall) of the Devils at the 2019 Entry Draft. He’s a versatile forward who primarily plays left-wing but can also play down the middle. He played 15 games for Linkoping HC in the SHL (Sweden) last season and finished with a goal and an assist. He was loaned out by Linkoping to BIK Karlskoga in the Allsvenskan, the second division in Sweden, and has spent all of 2019-20 with them, where he has 24 points in 28 games. His play with BIK has been strong enough to catch the attention of The Athletic’s Corey Pronman.

“I didn’t think much of Pasic when I watched him the past two seasons. He looked like an undersized forward with average skating ability and nice, but not great skill. I think that’s still true, but I underrated how good his hockey sense was, which has led to success in the second division Swedish league this season. Pasic makes a lot of plays and has two-way value. He should be a prominent player for Sweden at the world juniors.”

He isn’t one of the Devils’ top prospects, but Pasic could be the most intriguing. He may have fallen to 189th overall, but he was a top 100 prospect in most scouting services’ eyes. His numbers in the Allsvenskan are better than Jesper Bratt’s were in his plus-one draft season. And Bratt has turned into a reliable middle-six forward for the Devils.

The Devils selected the Russian defenseman with the 70th overall pick at this past Entry Draft. He has good size, at 6-foot-2, 176 pounds, which fits the trend of recent Devils’ draft picks on the blue line. Misyul has played in 28 games in the KHL for Lokomotiv Yaroslavl this season. But his ice time has been minimal, which is why he was sent down to the MHL to get more minutes.

Misyul, by the looks of it, will play a prominent role for Russia. He’s skated in their top four in exhibition games leading up to the tournament, and he’ll likely remain there when meaningful games begin. He’s a good skater and has offensive upside, even if his numbers in the KHL may not indicate it. A strong performance at the WJC could shoot him up the Devils’ prospect rankings.

Schmid skyrocketed up the Devils’ prospect rankings after a stellar 2018-19 season. It took a while for him to find a home, but he eventually landed on his feet with the Omaha Lancers (USHL), where he led the league with a .926 save percentage (SV%) in 37 games played. This will mark his second straight appearance for Team Switzerland at the WJC — he played in four games last year and finished with a .878 SV%.

It’s been a tough 2019-20 season for Schmid. He has a .891 SV% but has only played in six games due to an injury that put him on injured reserve early in November. He’s undoubtedly the Devils’ best goaltending prospect, and he should get significant minutes for Switzerland. It’ll also provide him an opportunity to get his season going as he works back from his injury. He could be a season away from turning pro, so how he performs for Switzerland will be worth watching.

The Devils have a pretty strong group of prospects heading to the 2020 WJC, and it would be even better if they loaned Jack Hughes to Team USA. But the decision to keep him in the NHL makes sense, given he has nothing left to prove among players in his age group.

As for the ones in attendance, it’ll be interesting to see how Bahl performs. He was the centerpiece of the Hall trade, and it’s the first time Devils’ fans will see him in action as one of the team’s prospects. Pasic will also be worth watching, as he should play a significant role for Sweden. And it looks like he could be another solid late-round find by the Devils’ amateur scouts.

The Devils have a bit of everything playing at the WJC. They have three of their four best defense prospects, their best goaltending prospect, and an underrated forward who’s improving his stock as a prospect. It may be another year or two before they’re making a mark in the NHL. But the tournament will give everyone a glimpse of who could help turn around the future of the franchise.