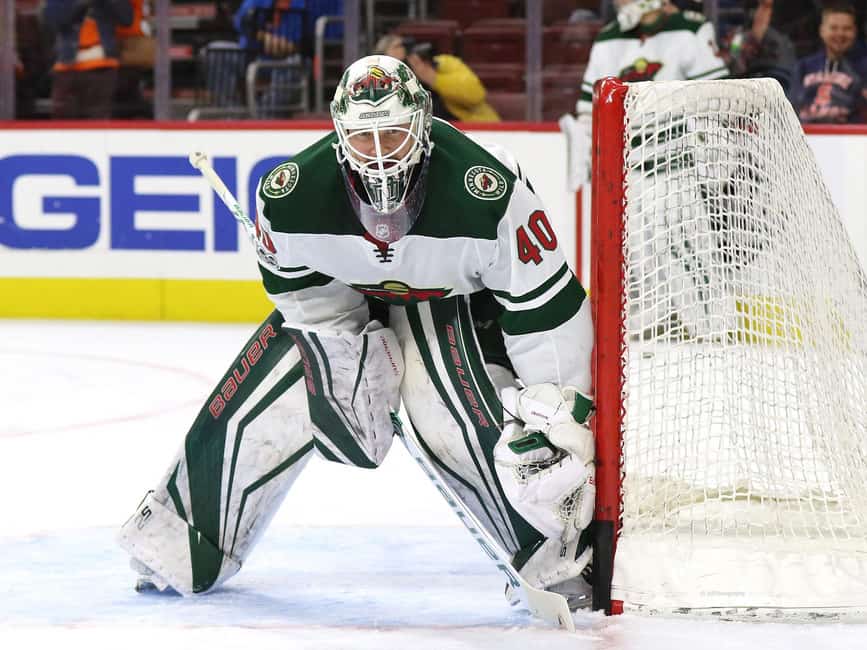 Monday night was the final day on the schedule before players and coaches head home for the Christmas break. The busy day gave us a historic streak in Boston, an emotional return in Minnesota and another win for one of the hottest netminders in the league. Plus, a little bonus stocking stuffer as we look back on two of the greatest goaltending performances to take place on Christmas Eve.

Rask
is Money in Boston

The top two teams in the Eastern Conference clashed on Monday night when the Boston Bruins hosted the Washington Capitals. The idea of having to play the Capitals in the Eastern Conference Finals this spring might make Bruins fans a bit uneasy. Heading into last night’s contest, the Bruins were 1-12-4 in their previous 17 games versus the Capitals.

Boston’s offense may have
eased some minds as they scored in bunches in a 7-3 win over the Metropolitan
Division leaders. Tuukka Rask made 39 saves to extend the Bruins point streak
to five straight games.

He also extended a personal streak as he has earned at least one point in all 14 starts on home ice this season. It is the second-longest such streak to start a season in franchise history. Gilles Gilbert went 16-0-1 at the old Boston Garden to start the 1973-74 season.

Gilbert went on to play in
the 1974 NHL All-Star Game, his only one, and the Bruins lost the Stanley Cup
Final to the Philadelphia Flyers. Boston hockey fans are hoping this year’s
team gets one step further come June.

This has been a trying
season for Minnesota Wild goaltender Devan Dubnyk as it has been about so much
more than just hockey. Dubnyk missed 15 games to be with his wife Jenn while
she deals with a medical issue.

Monday night, Dubnyk made his first home start since returning to the team and it was a memorable one. He stopped all 22 shots in saw in a 3-0 shutout of the Calgary Flames, who entered the game on a six-game road point streak.

“It’s nice to get
back,” said Dubnyk after
the emotional victory. “I just wanted to get back to feeling like
myself and just being confident. It’s been a while since I’ve had to go through
the adversity of the start of the season here. It’s easy to let yourself worry
about wins or losses or worry about getting scored on. I just tried to come
back from the break and just go in and feel confident and be myself and it
feels good to go out there and do that and just forget everything else and then
see where we are at the end of the year.”

Monday was a big day for Columbus Blue
Jackets netminder Joonas Korpisalo. First, he was honored as the NHL’s Third
Star of the Week. He went 4-0-0 last week with a 1.50 goals-against average
(GAA) and a .939 save percentage (SV%). His great week started with a 30-save
shutout of the Capitals, the top team in the NHL.

Later in the evening, he proved that last week was no fluke as he led the Blue Jackets to their fifth straight win. Korpisalo made 35 saves in a 3-2 victory over the New York Islanders. No save was bigger than this one against Anders Lee while the game was tied in the third period.

“He
gives the team confidence the way he is playing, and the team responds by
playing really well in front of him,” Blue Jackets coach John
Tortorella said of his young goaltender.

The
Blue Jackets have points in eight straight games, going 6-0-2, and Korpisalo was
the goaltender of record in all of those contests.

This
Date in Goaltending History: Hall of Famers Shine on Christmas Eve

While the 31 teams of today’s NHL get to enjoy a couple of days off for the holidays, that wasn’t always the case. The league used to play games on both Christmas Eve and Christmas Day until 1972.

On
Dec. 24, 1949, the old Forum was the site of one of the best goaltending duels
in the early history of the league. The Montreal Canadiens and New York Rangers
skated to a 0-0 tie, the only one in NHL history to be played on Christmas Eve
or Christmas Day.

Bill Durnan of the Canadiens and Chuck Rayner of the Rangers keep both sides off the score sheet for 60 minutes. It was the 31st shutout of Durnan’s Hall of Fame career which saw him win two Stanley Cups and six Vezina Trophies. Rayner would finish the 1949-50 season with seven shutouts and go on to win the Hart Trophy. He was inducted into the Hockey Hall of Fame in 1973.

Another Rangers Hall of Fame goaltender had a
big night in the team’s final Christmas Eve game in 1972. Ed Giacomin made 24
saves in a 5-0 victory over the Detroit Red Wings at the Madison Square Garden.
The shutout was the 40th of his career, tying Dave Kerr for the most in team
history at the time. He held on to the record of 49 shutouts until Henrik
Lundqvist broke it during the 2013-14 season.

Just like the NHL, the Goalie News will take a couple of days off for the holiday. We appreciate all your readership, so far, and are looking forward to what the rest of the season has in store for us. Happy Holidays from all of us at The Hockey Writers!