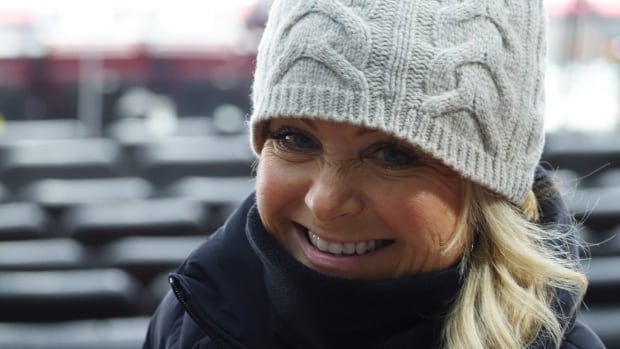 As an elite figure skating coach, she worked hard to develop the skills and discipline her skaters needed to compete at the sport’s highest level.

Now that she’s taken her talents to the hockey arena, however, perfection is no longer on the table.

“I always say that the hockey players, most of them, could not have been a figure skater,” Kettles recently told CBC.  “It’s much harder.”

After 25 years striving for perfection as a figure skater, Shelley Kettles is now bringing her skills to some of the NHL’s biggest players with specialized coaching sessions. 2:16

Letting the blades do the work

Standing just five-foot-two-inches tall on skates, Kettles, 52, has spent the last five years making a name for herself in the NHL.

She now works with the Ottawa Senators, running specialized skills sessions with players whose game needs a bit of an edge.

But what she’s really teaching is the basics of figure skating techniques: balance, control, stability and letting the blades do the work.

As a young skater, Kettles remembered spending hours “doing figures,” getting to know her skates and use every bit of the blade.

Imparting that knowledge to elite hockey players is more important than ever, she said: the game is becoming faster, and players need to be able to keep up.

The results are clear

Kettles acknowledges that some players don’t immediately grasp the benefits of incorporating figure skating techniques into their game.

“They’re not open at all. They’ve been told that this is what they have to do,” said Kettles.

But the results quickly become clear, she said, and it usually only takes a few sessions to start to see the difference.

She knows what she’s talking about.– Logan Brown

Ottawa Senators forward Logan Brown has been working with Kettles for years, before he was drafted. He admits they paint a funny picture on the ice, a tiny figure skater bossing around huge lumbering hockey players.

“But she knows what she’s talking about. And personally, she’s helped me a lot,” said Brown, after his latest session with Kettles.

Brady Tkachuk, another forward with the Ottawa Senators, has also started working with Kettles.

“I know sometimes I catch myself falling, and [because of my size] I call myself a little bit of a Zamboni out there,” Tkachuk said. “So if I can just be stronger on my skates and be able to withstand getting hit and stay on my feet, I think that’ll just help me.”

Goal is to make the players move effortlessly

Kettles said she is working on Tkachuk’s speed and extension, teaching the massive player to get lower on the ice.

“His weakness is skating, so it’s taking that big body and making him skate big, not small,” Kettles said.

Her goal is to make all the players move as effortlessly as her figure skaters.

Striving for a smile

Kettles didn’t leap straight from figure skating to hockey, however: the transition took years, and she started small, by teaching kids. Former NHLer Jason York first asked her to teach his boys, and she took it from there.

She still works with kids every week, and the drills she runs with six- and 12-year-olds are the same as the ones she puts NHL players through.

The first objective with her young players and her elite pupils is the same — get them to love skating.

She admits she misses the world of rhinestones and the fierce competition just a bit, but now instead of perfection what she’s really striving for is a smile.

“It’s so rewarding,” she said. ”We could work for two months straight, and it’s hard work. And all of a sudden I start to see a smile on their face because they are getting confident and it becomes easy.”