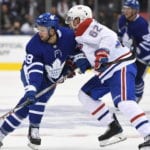 Sabres have defensemen available … Will someone quickly move on Toffoli? Saad will get trade interest when healthy

The Buffalo Sabres have some extra defensemen and are looking to make moves.

The New Jersey Devils are among the teams looking at defensemen.

The Los Angles Kings could make forward Tyler Toffoli available, and would a team move quicker on him rather then wait to see if Chris Kreider is made available.

Chicago Blackhawks forward Brandon Saad is out for about three weeks. When he’s healthy, there could be some teams interested. He has a year left on his deal.

The Toronto Maple Leafs have some organizational depth up front and have a lot of guys they can try to replace Ilya Mikheyev with.

“But one of the things they are kind of looking at right now, is they are testing the value on one of their prospects, a pretty fascinating player in Jeremy Bracco.

Now Bracco is 22-years old, he was second in the American Hockey League in scoring last year, and his route to the NHL is kind of blocked by a lot of great players.

They’ve been asked about him a bit, and now what they’ve done is they’ve put him out there, and I think they want to see what his value is, and what other teams might be willing to do to try and get him. But I think it’s going to be pretty interesting.

Timashov and Harpur are two other guys who are also out there, maybe looking a bit more roles elsewhere, but Bracco is going to be the fascinating one because I think there is some interest.”

Per Friedman: Leafs on the trading block: Bracco, Timashov and Harpur #LeafsForever pic.twitter.com/hyhu1BIgQo