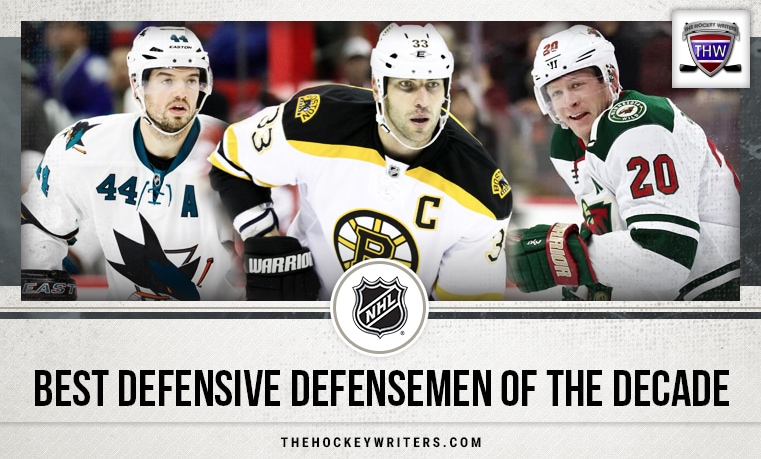 The 2010s have come and gone, and as we embark on a new decade, the hockey world has been reminiscing on the greatest goals, saves and players of the decade. Most of those players include high-octane scorers and acrobatic netminders, but what about the defenseman who plays 20 minutes a night, blocks shots and has an underappreciated impact throughout the course of a season?

Those are the players who will appear on this list. They’re not going to blow you away with their speed or creative passes, but they are a consistent presence in the lineup and a pain for their opponents to play against. It’s not a glamorous job by any means, but it’s a necessary one, and the players that fall into this category love every bit of it.

Related: The Best NHL Defensemen Ever

With that said, let’s take a look at the best defensive defensemen of the 2010s.

Although he’s never finished as a Norris Trophy finalist, Pietrangelo has been one of the most consistent defensemen in the past decade. He has played at least 70 games in every full NHL season and has averaged close to 25 minutes of ice time per game since the 2010-11 season. The St. Louis Blues can count on him for 40 points a season, as well as a shutdown defensive game.

Pietrangelo is third in defensive point shares since 2010 at 47.2, as well as sixth in takeaways (315) and 13th in blocks (1,005). A common theme for all the players on this list is consistency, and Pietrangelo is right there with the best of them. Above all, if he weren’t with the Blues, one could argue they wouldn’t have won the Stanley Cup last season.

Before last season, Giordano had a career-high 56 points in 2015-16 and was always a steady presence on the Calgary Flames blue line. He exploded last season for 74 points in 78 games, but he never forgot his defensive responsibilities. He had 144 blocks, a career-high 73 takeaways and 5.9 defensive point shares — the number of points contributed by a player due to his defense — which was the second-best of his career.

From 2010 to the present, Giordano ranks eighth in defensive point shares at 40.9. He’s also fourth in blocks (1,102), ninth in takeaways (299) and 13th in Corsi-for percentage (52.8). Many Flames fans clamored for his name to be mentioned in the Norris Trophy voting, and he finally won the award last season.

As the Flames captain, he brings a level of consistency rarely seen from defensemen in today’s game, and he has been doing it well into his age-36 season.

In no particular order, here are some shutdown defensemen who earned some consideration but didn’t quite make it on this list:

Suter has been a workhorse throughout the decade, averaging more than 27 minutes of ice time per game. He has 412 points in 719 games over the last 10 years and has simply been Mr. Consistency for the Minnesota Wild. He has also only missed 24 games since the start of the 2010-11 season, putting him fifth in games played among defensemen over the last 10 seasons.

Suter is second among defensemen in defensive point shares with 51.6, only behind the aforementioned Doughty. On top of that, his total point shares — both offensive and defensive — are sixth among defensemen. He’s one of the best shut-down defensemen in the game, plain and simple. He has only had one top 10 finish for the Norris Trophy and hasn’t won a Stanley Cup yet, but his ice time and the number of games played over the last decade show a lot about how valuable Suter is to the Wild defense.

Vlasic has been a mainstay on the San Jose Sharks’ blue line over the last decade, playing in almost 700 regular-season games. He has never been a prolific scorer — he has career highs of 11 goals and 39 points — but what makes him irreplaceable is his ability to shut down the opponents’ top line night in and night out.

Among defensemen this decade, Vlasic is seventh in defensive point shares with 41.3. He’s also 12th with 696 games played, ninth with a plus-92 rating and a 54.9 defensive zone start percentage, seventh with 1,075 blocks and 21st with 15,103 minutes played. He’s been both consistent and reliable throughout his career, both of which are big reasons he’s almost always chosen to represent Canada on the international stage.

In today’s game when defensemen are encouraged to jump in on the rush, Vlasic has proven each night that there’s still a place in the game for a stay-at-home defenseman.

Once Chara plays a game in 2020, he will have played in four different decades. The 6-foot-9 defenseman has a laundry list of accomplishments that range from being a seven-time All-Star to winning the 2011 Stanley Cup. Above all else, he has been the most consistent presence on the Boston Bruins’ blue line over the last 10 years and has been one of the hardest defensemen to play against in NHL history.

Chara is fourth in the decade among defensemen in defensive point shares (46.9), but the list doesn’t stop there. He’s first overall with a plus-198 rating, sixth in penalty minutes (631) and Corsi-for percentage (53.5), 13th in time on ice with 16,064 minutes played and 13th in defensive zone start percentage at 54.4. He has been a Norris Trophy finalist six times — he won the award in 2009 — and can use his long reach to shut down even the best shooters and puck handlers.

Related: Could This Be Chara’s Last Season?

As an athlete, he’s almost superhuman. Chara, now 42 years old, has averaged nearly 24 minutes of ice time per game and is still over 21 minutes per game into his 40’s. And how can we forget when he came back to play with a broken jaw in the Stanley Cup Final in June?

Even well past his prime, Chara has been the best shutdown defenseman this decade.