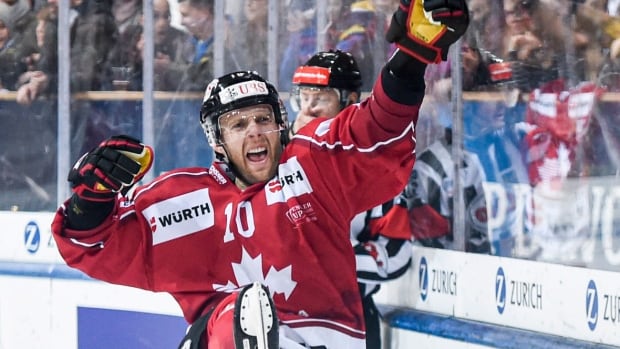 Canada has won the Spengler Cup for the fourth time in the past five years.

The Canadian team, comprised mostly of European-based pros, including many ex-NHLers, beat Trinec Ocelari of the Czech Republic 4-0 in the final of the annual Christmas tournament on Tuesday in Davos, Switzerland.

It was the 16th overall Spengler Cup title for Canada, breaking a tie with host HC Davos for most in tournament history.

Canada went 4-0 this year and outscored opponents 19-2, setting a record for fewest goals allowed in the tournament.

Goaltender Zach Fucale made 26 saves for his second straight shutout.

Kevin Clark scored a pair to up his tournament total to six goals and Canada is headed to their 5th consecutive Spengler Cup final.  1:08

“This team was unreal. We had an awesome group of defencemen and everyone made me look good,” said Fucale, a native of Laval, Que. “I really did not have to do anything special because our team played great, so it was a lot of fun.

“I just tried to stay focused and a few times throughout the tournament I got pretty lucky, but it was such a great experience with a great team.”

Fucale, who is playing for Orlando of the ECHL this season, gave up just one goal in three starts. He finished with a 0.33 goals-against average and .986 save percentage.

Fucale is 10-0-1 in three appearances at the Spengler Cup.

After a scoreless first period, Canada scored three power play goals in a span of 4:07 to take a commanding lead.

Canada lost last year’s final in a shootout against KalPa Kuopio of Finland.