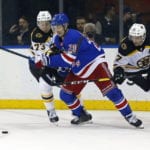 If the Rangers decide to move Kreider, there will be lots of interest

Sportsnet: Teams are now able to move s as the NHL trade freeze is over. New York Rangers pending unrestricted free agent Chris Kreider is getting some interest but he may not be available just yet.

“All the contenders from Colorado to Boston to St. Louis to Pittsburgh are all believed to be interested in ,” Sportsnet’s Elliotte Friedman said during the Headlines segment on Hockey Night in Canada. “Teams don’t believe, right now, the Rangers have made him available, but they are waiting to see if they decide they can’t keep him, and they want to trade him, there is a ton of interest.”

Kreider has a modified no-trade clause and carries a $4.625 million salary cap hit.

Rangers are going to be patient with Andersson’s trade request

Sportsnet: New York Rangers forward Lias Andersson still wants out of New York but the Rangers are not in a rush to move him.

“There’ve been a couple of similar situations,” Friedman explained. “ Puljujarvi in Edmonton, Honka in Dallas, and the teams have made it very clear. They are going to wait. They are going to be patient. Just because the player wants out, doesn’t mean they are going to move swiftly. I think that is the kind of process the Rangers are going through here.”

Chris Johnston last week on headlines with regards to Andersson.

“I think the challenge will be trying to trade an asset at this point in time where he hasn’t met the promise that some drafted so high (do),” Johnston explained. “But obviously he’s someone the Rangers can’t just give away for free.”

Friedman had noted that the Rangers had been interested in an Andersson for Puljujarvi trade before the December 1st deadline for Puljujarvi, and maybe they’d revisit that.