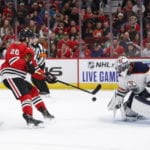 Kurt Leavins of the Edmonton Journal: Sportsnet Mark Spector on the Edmonton Oilers interest level on Taylor Hall before he has traded by the New Jersey Devils.

“They weren’t giving (Arizona) a 1st Round pick”.

Oilers fans may be hoping that the Oilers would be able to get pending RFA defenseman Darnell Nurse signed to a long-term deal at $5-plus million but the cost for quality defensemen like Nurse is $6-plus million.

The Edmonton Oilers have some interest in Chicago Blackhawks forward Brandon Saad. The Oilers and Colorado Avalanche are among the interested teams. The Blackhawks are looking for a defensive prospect in return, which is something the Oilers and Avs have. Saad’s $6 million salary cap hit through next season may be an issue for the Oilers. Saad is currently out for three weeks with an ankle injury.

Friedman says that internally the Oilers are thinking they’ve traded about too many draft picks over recent years, and that could be one of the reasons they were out on Taylor Hall.

As for who the Oilers could be in on?

“If you’re asking me about guys who could be fit for Edmonton, I think (Tyler) Toffoli (of Los Angeles) could be a possibility there. I think a lot of teams are looking at him, not just you. But it would cost you a pick in the top three rounds for sure.”

“Yes, are you guys willing to do one (draft pick) instead of two? The other guy I’m wondering about, and he’s injured right now, they just announced he’s out for three weeks now, and cap-wise you would have to do some work there, but Brandon Saad. I think there’s a lot of interest in Saad, I think you guys are one of the teams that is interested. But he’s got another year. So I think you got to be careful about it. But I think there’s been a lot of teams asking about him. I think you guys are in there.”

Mark Spector of Sportsnet believes that Ottawa Senators’ pending free agent forward Jean-Gabriel Pageau could be one option for the Oilers.