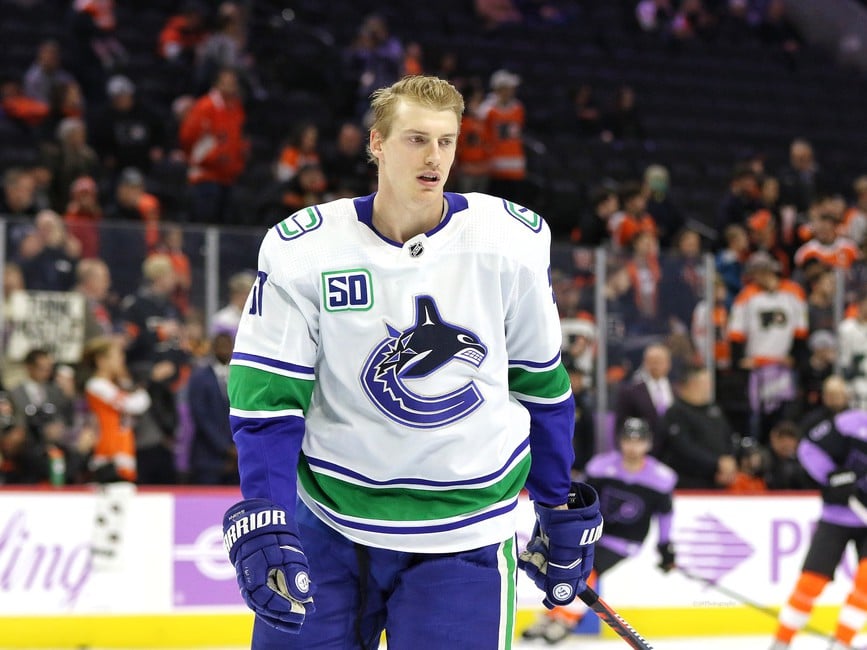 CALGARY — Tyler Myers scored twice and added an assist — all of the damage inflicted in the first period — as the Vancouver Canucks built up an early 3-0 lead and cruised to a 5-2 victory over the Calgary Flames on Sunday night.

Myers opened the scoring on a power play at 3:29, scoring his second goal of the season on a 55-foot wrist shot that beat a partially screened David Rittich.

Just over three minutes later, Myers struck again from the same distance, again on a wrist shot, only this time it came with nobody in front, his low shot squeaking through the pads of the Flames goalie.

Myers’ two goals equals a career-high, having also done it on four other occasions.

Tanner Pearson with a pair, the second into an empty net, and Jake Virtanen also scored for Vancouver (21-15-4) whose fifth win in a row moves them past Calgary and Arizona into second place in the Pacific Division. The Canucks are even in points with the Coyotes but hold a game in hand.

Rasmus Andersson and Noah Hanifin, in the game’s final minute, scored for Calgary (20-16-5). The Flames are winless in their last four games at home.

Virtanen extended the visitors’ lead to 3-0 at 10:52 of the first period, striking on the man-advantage yet again. The Flames entered the night with the league’s second-best penalty kill but Vancouver’s fourth-best power-play made it 2-for-2 in the early going when his shot deflected in off Travis Hamonic’s stick.

That goal ended the night for Rittich, who was replaced by Cam Talbot after giving up three goals on seven shots. It’s the second time Rittich has been pulled this season. His record falls to 17-9-5. Talbot made 19 saves in relief.

With Jacob Markstrom having started the last nine games including a 49-save performance against Los Angeles on Saturday, rookie Thatcher Demko made his first start since Dec. 7.

Calgary finally got on the scoreboard with 1:24 left in the second period.

While the teams were playing 4-on-4, Andersson jumped into the rush and neatly buried a rebound of a Sean Monahan shot to cut the deficit to 3-1.

The Canucks restored their three-goal cushion at 6:14 of the third when Pearson collected the puck in front, spun and sent a shot over Talbot’s shoulder.

Miikka Kiprusoff, the Flames all-time wins leader, was in attendance. Living in Finland since retiring, he got a standing ovation when he was introduced and there were chants of “Kipper, Kipper”… Calgary LW Sam Bennett was a healthy scratch. He has no points in his last eight games… Canucks have scored 45 first period goals, which leads the NHL. Flames are last with 24.

This report by The Canadian Press was first published Dec. 29, 2019.