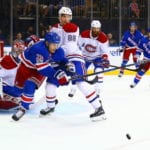 Elliotte Friedman of Sportsnet: There could be some news on Justin Williams by the end of the weekend.

Teams are now eligible to sign contract extensions for players who signed one-year contracts. Ottawa Senators Anthony Duclair (RFA) is one player who is eligible but don’t get the sense there has been much talk there. Robin Lehner (UFA) is another player. The Chicago Blackhawks have some decisions there. Lehner likes it in  Chicago.

There are some teams that are looking to see what the Pittsburgh Penguins do in net. Casey DeSmith has two years left, and Tristan Jarry and Matt Murray are RFAs. Jarry had been available last offseason for a second-round pick. There were extension talks between Murray and Penguins last offseason but those have stopped.

There has been some interest in Calgary Flames forwards Mark Jankowski and Sam Bennett.

Chicago Blackhawks forward Brandon Saad will get interest. Hard to see the Edmonton Oilers being able to fit in his contract.

Hard to believe that Brent Seabrook is ready to stop playing hockey after he recovers from his injuries.

Jeremy Bracco may be looking for a better NHL opportunity as he’s blocked in Toronto. The Maple Leafs are willing to listen. Could he be part of a larger deal? Ben Harpur and Dmytro Timashov have also asked if there are better opportunities out there.