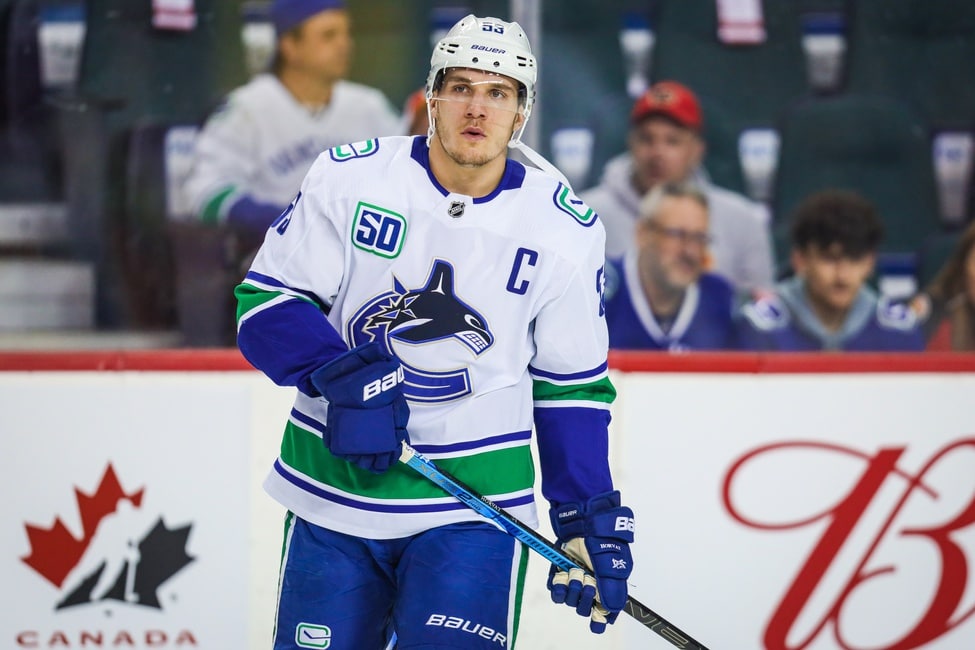 Led by Jacob Markstrom and Jake Virtanen, the Vancouver Canucks skated to a 3-1 win over the Arizona Coyotes on Jan. 16. It was the team’s 10th win in the last 13 games.

With that win, the Canucks inched closer to the top of a tight Pacific Division race. The Coyotes and Calgary Flames are tied with 57 points, the Vegas Golden Knights and the Canucks are tied with 56, and the Edmonton Oilers are one behind with 55 points.

Related: The Canucks’ Elias Pettersson: Even Better in 2019-20

As Canucks captain, Bo Horvat said, ”It’s a game of inches right now in the standings and on the ice. It’s going to be like that from here on out. We have to keep winning hockey games if we are going to stay in it.”

Fresh off this good showing, in this post I want to help Canucks fans stay up-to-date on the news coming from the organization.

Markstrom might have been a bit shaky in the 4-0 loss in Winnipeg to the Jets earlier this week, but he showed none of that against the Coyotes. The Coyotes are a tough road team (with a 14-9-3 record in 26 away games) and even tougher with the recent addition of Taylor Hall from the New Jersey Devils. It was a good win for the team and for Markstrom specifically.

The 29-year-old Swede bounced back in a big way by stopping all but one shot (34 of 35) in the win. He was far busier than his Coyotes counterpart Adin Hill; and, in some ways, the game flip-flopped the Jets game where the Canucks presssed harder but the Jets’ goalie Connor Hellebuyck shut the door.

Markstrom improved his season’s record to 18-13-3 with a goals-against-average of 2.71 and a .916 save percentage in 34 games. He’s also won eight of his last 10 and, although in some of those wins the offense scored a lot, few goalies have had a better record in recent weeks.

Markstrom didn’t look tired at all but he’s now made four consecutive starts, so it might be time to see Thatcher Demko in the net against the San Jose Sharks on Saturday’s Hockey Night in Canada. Markstrom is headed to the All-Star game so there’s not much rest for him coming up.

Funny how things change with time. This spring, Loui Eriksson was considered a pariah after dissing head coach Travis Green in an interview in Sweden. The Canucks tried unsuccessfully to trade him during the offseason, but there were no takers – with good reason, because he hadn’t produced much at all. Now, with forwards Josh Leivo and Micheal Ferland out with injuries, Eriksson is needed.

In fact, he played hard against the Coyotes. On Tanner Pearson’s empty-netter to seal the win (Pearson’s 100th NHL goal), Eriksson squeezed the puck free in a board battle and sent a nice pass to an open Pearson. Eriksson’s played in 29 games this season and has recently been skating top-six minutes. His production isn’t great, but he isn’t hurting the team. He now has seven points in those games.

Item Three: Virtanen Has More Points Than All of Last Season

Jake Virtanen scored the winning goal (his 14th) in the second period. He has a career-high 26 points in 48 games, more points than he had in all 70 games last season. His December was hot, with 11 points in 13 games. Although he’s slowed down recently, with only two goals in eight games in January, he’s still playing well and contributing more than previously.

The Vancouver-native is a good team player and said all the right things after the game: “It’s nice (but) I don’t really look at it like that. I want to keep going and keep producing for our team. We want to make the playoffs, so whatever I can do.”

Elias Pettersson reached the 50-point threshold in 48 games. Although he didn’t play much of a role in the win against the Coyotes, who played him tough, he still ended up with two assists, including one on the power play.

In Pettersson’s 48 games, he has 21 goals and 29 assists. His power-play assist was his 20th man-advantage point and he’s on better than a point-per-game pace, which should easily translate to an 80-point season. Of course, he has to stay healthy.

Bo Horvat has great hand-eye coordination, which was evident when he banged home a juicy rebound on his power-play goal. Recently, he’s been on a roll and has scored six goals and seven assists in his last nine games, starting just before January. Horvat now has 16 goals and 41 points in 48 games.

What’s Next
with the Canucks?

If the team continues to play well, they have a good chance of making the playoffs. They play 18 of their last 34 games at home at Rogers Arena. So far, their record is solid on home ice (15-5-3) in comparison to their record (11-13-1) on the road.

The team’s trip to the Sunshine State to play the Tampa Bay Lightning and Florida Panthers was unusually difficult (the Canucks were outscored 14-4), an indication that they like home cooking better. The team plays the Sharks just before the NHL All-Star break.