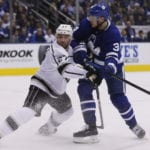 Phaneuf hanging out with the Maple Leafs

“Now, I should point out. Dion has not officially retired from hockey, he would like another opportunity somewhere but the reason he is in Toronto is simply to get a look at the business of hockey and he reached out to Brendan Shanahan, asked if he could come in, get a feel for what the whole Maple Leaf Sports and Entertainment operation off the ice is all about. That’s what he’s been doing.”

Sonny Sachdeva of Sportsnet: The Toronto Maple Leafs are currently without defenseman Morgan Rielly and Jake Muzzin. Adding a veteran defenseman who can eat some minutes and chip in offensively may be needed.

Some potential trade options for the Maple Leafs.

T.J. Brodie or Travis Hamonic – Calgary Flames – The Leafs and Flames previously talked about Brodie and he would have been a Maple Leaf already if Nazem Kadri hadn’t nixed the deal. Kasperi Kapanen or Jeremy Bracco could interest the Flames.

Brenden Dillon – San Jose Sharks – Pending UFA who has size and a physical edge. Kevin Kurz of The Athletic reported the Sharks could be looking for a 2nd round pick and a prospect. Jeremy Bracco?

Alec Martinez – Los Angeles Kings – A $4 million cap hit and is under contract for one more year.

Nikita Zadorov or Ian Cole – Colorado Avalanche – Both can eat minutes and come with a manageable salary cap hit. Avs GM Joe Sakic may not want to mess with their blue line though. If the Avs look to acquire a top-four defenseman elsewhere, it might push someone out.

Zach Bogosian – Buffalo Sabres – Carries a $5.14 million salary cap hit and the Sabres may have to retain salary.