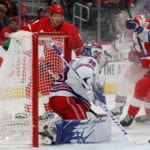 With the NHL’s Feb. 24 trade deadline less than two weeks away, all eyes are on the New York Rangers.

The rebuilding Blueshirts’ playoff hopes are fading. With 58 points in 54 games, they’re nine points out of the final Eastern Conference wild-card berth. Barring a strong surge over the remainder of the schedule, and several of the clubs ahead of them cratering in the standings, they’ll miss the playoffs for the third consecutive season.

Kreider is Gorton’s most valuable trade chip. The 27-year-old left-winger is a big, fast, physical winger with solid offensive skills.

Recent speculation has Kreider linked to several Stanley Cup contenders, including the Boston Bruins, Colorado Avalanche, Pittsburgh Penguins, and St. Louis Blues. Nevertheless, Rangers management will meet this week with Kreider’s agent to discuss a possible contract extension. The outcome of those talks will decide the winger’s fate this season.

Fast hasn’t garnered as much attention in the trade rumor mill, but that doesn’t mean there won’t be any interest in him. A capable defensive forward, he could attract attention from teams seeking checking-line depth.

The Rangers’ goaltending situation is also generating plenty of trade conjecture. With Henrik Lundqvist, Alexandar Georgiev, and Igor Shesterkin splitting the duties, many observers wonder how Gorton will address his crowded crease.

Georgiev was considered a trade candidate when the promising Shesterkin was called up from their AHL affiliate in Hartford. Gorton, however, seems reluctant to part with the 24-year-old Bulgarian netminder.

Some pundits wonder if Lundqvist will waive his no-movement clause to join a playoff contender. The New York Post‘s Larry Brooks doubts it, but wouldn’t be surprised if the Rangers buy out the final season of the 37-year-old’s contract.

Brooks also suggests the Rangers could start entertaining trade offers for Jacob Trouba before the 25-year-old defenseman’s no-trade clause kicks in on July 1. Signed last summer to a seven-year, $56-million contract, Trouba has struggled in the first-pairing right-side role on the Rangers’ blueline. Brooks feels young Adam Fox is better suited to that role.

Gorton, however, could have a different view. In any case, trading Trouba would likely be a better option in June before his no-movement goes into effect on July 1, when rival clubs will have more salary-cap space and desire to make significant trades.

In recent weeks, DeAngelo has become a more likely trade candidate. Forced to accept a one-year, $925k contract last September, the 24-year-old blueliner is among their leading scorers with 42 points. He’ll be in line for a substantial raise and has all the leverage this time.

With almost $65 million invested in 14 players for 2020-21, the Rangers could have a tough time paying a hefty raise to DeAngelo, especially if they end up re-signing Kreider to an expensive new deal.

As the Rangers keep sliding in the standings, it’s increasingly likely Gorton will be a deadline seller.

Whatever happens with the Kreider contract talks will likely determine his course of action leading up to Feb. 24.