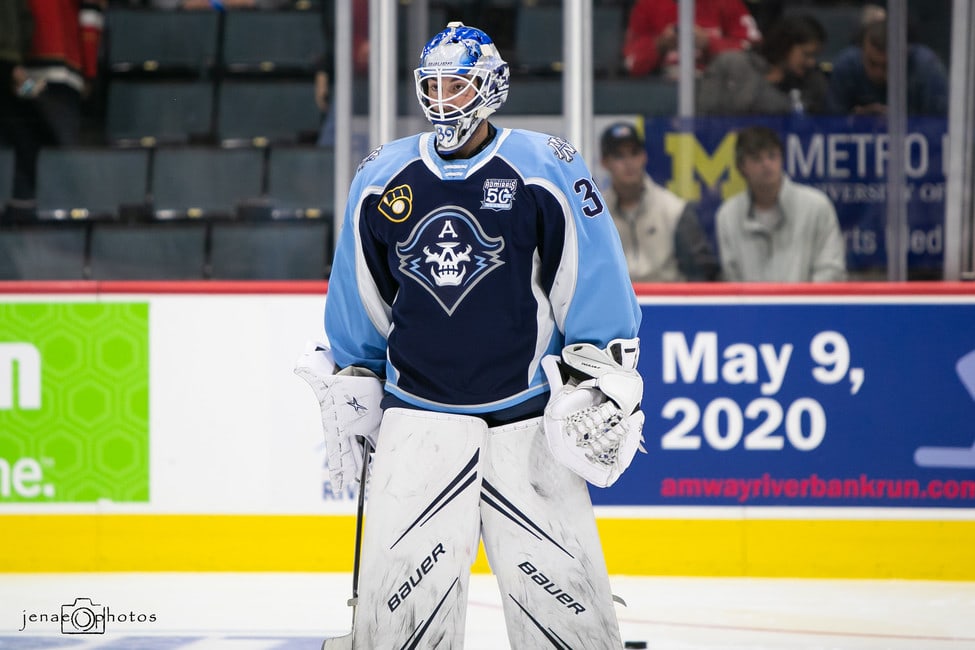 It has been known for a while now that Juuse Saros is the Nashville Predators’ future goalie. The young Finn has backed up long-time Predators’ great Pekka Rinne for the past three-plus seasons, waiting, learning and developing. But with a career spanning more than 10 seasons, Rinne is clearly on the tail end of his NHL journey.

Especially of late, Predators’ fans have been given a good look at what the future could hold. Saros has received many starts — 8 in the past 10 games to be exact — and has become the familiar face between the pipes, elevating to starter status.

But this isn’t about Saros, we know who he is, what he can do and the potential he holds. No, this is about what the Predators’ tandem will look like moving forward when Rinne is no longer in the picture.

Connor Ingram signed a three-year deal earlier this week, which shows that the Predators like what they see in him and possibly consider him as Saros’ backup of the future. His stats have been incredible, and it seems he could be the team’s next “Saros.”

Now understand that the “next Saros” simply means a backup who has potential and is familiar to the team and fan base. Having another “Saros” is obviously the preferred option for the Predators, rather than shuffling through second-string goalies season after season, trying to find a fit and stability.

Ingram, 22, was acquired by the Predators from the Tampa Bay Lightning for a 2021 seventh-round draft pick, a deal that was made back in June 2019.

Hockey fans were introduced to Ingram back in 2017 when he represented Team Canada in the World Junior Championships — commonly referred to as simply, the World Juniors — along with Philadelphia Flyers’ goalie, Carter Hart.

However, Predators’ fans got their first, in-person look at Ingram during the annual Prospects Showcase, a mini tournament between the Predators, Carolina Hurricanes, Washington Capitals and Ingram’s former employer, the Lightning.

Ingram was every bit as impressive as you would expect. The native of Imperial, Saskatchewan was as poised as an NHL veteran and possessed the quickness and response reflexes of a young, talented prospect.

Since that tournament, Ingram has continued to impress. Initially tabbed to be Troy Grosenick’s back up, the two find themselves in a similar situation to that of Saros and Rinne. Ingram and Grosenick have split the season exactly down the middle, with both goalies playing in 33 games for the Milwaukee Admirals.

Like the NHL, the AHL is on an indefinite pause, due the health concerns. But before the season was suspended, Ingram held a 21-5-5 record, which was the third-most wins in the league, helping the Admirals amass the best record in the AHL, sitting eight points ahead of the second-place team, the Providence Bruins.

Ingram was selected to this season’s AHL All-Star game, largely thanks to the 1.92 goals-against average (GAA) and his .933 save percentage (SV%). Before shutting down, Ingram finished on a high note, recording a 25-save shutout over the San Antonio Rampage.

At this point, it would be fair to ask, “If he’s this good, why did the Lightning trade Ingram? And why get rid of him for a seventh-round pick for that matter?” Well, according to Ken Campbell of The Hockey News, “the Lightning were not thrilled with Ingram’s work ethic and demoted him to send that message, one that ultimately soured the relationship between the two parties.”

A skilled player whose work ethic has come into question? It sounds like a familiar Predators’ storyline this season. Head coach John Hynes preached work ethic from day one with the Predators. The bench boss has not shied away from that ethos either. Hynes reduced minutes of star players such as Ryan Johansen, who is averaging 17:03 time on ice, the third-lowest average of his career, ranking only ahead of his first two NHL seasons’.

Johansen seems to be getting the message, and his play before the league pause showed signs of improvement. If Ingram gets a shot with the Predators and Hynes is the coach, the “work ethic” downside could be a non-issue, leaving a talented young player with a high ceiling for goalie coach Ben Vanderklok to work with.

As Predators fans are aware, goaltenders for this organization often hone their craft before being given a shot in the league. Saros played in 53 AHL games before really being promoted to the Predators full time — and that’s on top of the 91 games he played for HPK (Hämeenlinnan Pallokerho) after being drafted in 2013.

Now, Ingram has already played more than 53 minor-league games — 106 to date — due to the seasons he spent with the Lightning’s farm teams, the Syracuse Crunch and the Orlando Solar Bears of the ECHL. And he will most likely keep adding to those minor-league game totals with Rinne and Saros each having one more year left on their respective deals after this 2019-20 season.

Related: Are Pekka Rinne’s Best Days Behind Him?

However, you must remember, Ingram’s minor league game total is and will be, more indicative of available opportunities rather than skill or slow development. The Predators never had a backup they were married to by the time Saros showed his skill and potential, which helped him secure his spot with the Predators with only a few North American games to his name.

Rinne played in 145 minor-league games before receiving his full-time NHL job and well, we all know how that turned out. Obviously, this is not a comparison, nor a claim saying expect Ingram to become the next Rinne or even the Predators’ future starter, as that would be ridiculous.

But just because many haven’t heard of him since the 2017 World Juniors or maybe even at all, doesn’t mean he won’t impress you. Don’t be surprised if the young goalie gets his big-league call-up, he sticks around, steals games from time to time and gives fans that exciting sensation when announced in a game’s starting lineup.