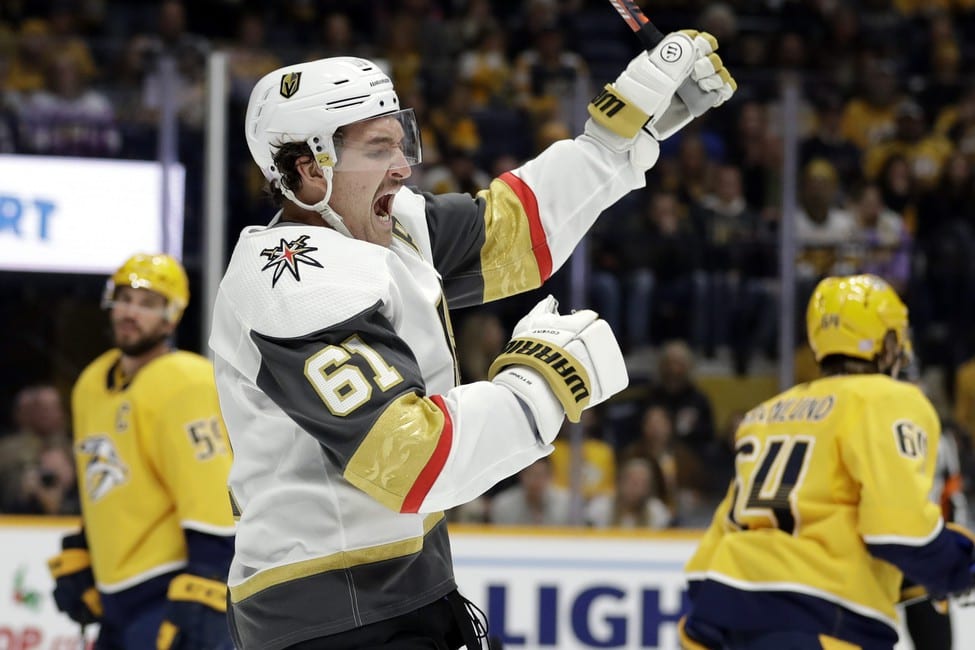 When you play a sport and accomplish a task as a team, it is something worth celebrating. Whether you hit a home run, score a touchdown or light the lamp, it makes you happy and creates an expression you want to let out. Scoring a goal while playing in the best hockey league in the world is definitely cause for celebration and Mark Stone is one of the best at showing his feelings.

The Vegas Golden Knights forward has been recognized on Twitter as having some of the best cellys when he or his team scores. The hashtag “#ExpressiveMarkStone” has become a trend online and whenever they score a goal, you can bet there is a camera on him to catch his emotion.

This season has brought us many great expressions as he was averaging almost a point-per-game before the season was halted. He recorded 63 points in 65 games, only 10 points behind his career-high he set last season.

Perhaps it is the fact that he was drafted at the end of the sixth round in 2010 that makes him not take any game he plays for granted and appreciate every moment he spends on the ice. Each time he puts the sweater over his head, he knows to give it his all and celebrate his personal, and more importantly, team success in his new home.

Here are my top-five #ExpressiveMarkStone moments.

#5 – Any Goal is Worth Celebrating

Stone is a competitive player and anytime his teammates score he is ecstatic, even when he is on the bench. In this clip, you can see the pure joy he has on his face when Paul Stastny scores, putting them up 4-1 in the second period over the Arizona Coyotes.

Stone is intently watching the play from the bench and jumps up when he sees the puck go in the net. He gives fist bumps to his teammates around him and starts pounding the boards as he is cheering while giving the players on the ice a few congratulatory words when they skate by.

The Golden Knights have had an up and down season, putting them in the middle of a playoff race at the start of the new year. With a new coach, each win matters as the try and qualify for their third straight Stanley Cup playoffs appearance. They welcomed a tough Philadelphia Flyers team to town in January and won a hard-fought game, 5-4.

After each win, the team goes on the ice to thank the goalie and the boys celebrate together. Stone was the first player to greet Marc-Andre Fleury and you can see the excitement on his face when he congratulates his netminder. Also, the fact that his high fives are more like hard fives gives away how pumped he was for those two points.

Sometimes I think Stone’s celebrations are better when he makes the play rather than when he finishes it. He starts the two-on-one by looking away from Max Pacioretty and gets Chicago Blackhawks defenseman Brent Seabrook to bite, then uses a sweet little toe drag to get around him and slide the puck over to Pacioretty for the finish.

This goal put the Golden Knights up 4-0 in the third period, but you can see when he meets Pacioretty in the crease that it should have been a goal to put them up by one late in the game. He doesn’t take his foot off the gas and that makes his cellys even more entertaining.

#2 – Scoring When It Matters

In a match-up with one of the top teams in the league, the Tampa Bay Lightning and Golden Knights were at a 2-2 standstill when Stone broke that tie late in the second period.

Pacioretty started the play by causing a turnover in the neutral zone, then deadline acquisition Alec Martinez picked the puck up and sprung Pacioretty the other way for a 2-on-1 with Stone.

He fed the puck over to Stone, who crashed the middle of the ice and went forehand-backhand to slide it past the outstretched leg of Andrei Vasilevskiy. His serious, yet passionate facial expression said it all. This was a potential Stanley Cup Final matchup and he was all business when it came to winning the game.

This game against the Coyotes was a big one for both clubs. They were tied at 46 points going into the contest and it was a five-team race for division supremacy as the season was headed towards the new year. On the first man advantage of the game for the Golden Knights, the team cashed in.

You can see by Stone’s emotion how big of a game this was for them and he wanted to set the tone early. The Coyotes tied the game a few minutes later, but Stone made it a mission to win this game. He scored another goal before the end of the first period and the Golden Knights held onto that lead for the rest of the game, closing with a 4-1 victory and leaping over the Coyotes in the standings.

It is unfortunate that the season had to be put on hold. Winners of 11 out of their previous 13, the Golden Knights were on a tear and we undoubtedly would have seen many more Stone expressions. With the team they have assembled in Las Vegas, the organization should be a Stanley Cup contender for the next few seasons – we can only imagine what kind of faces Stone will give us if he is able to hoist Lord Stanley.