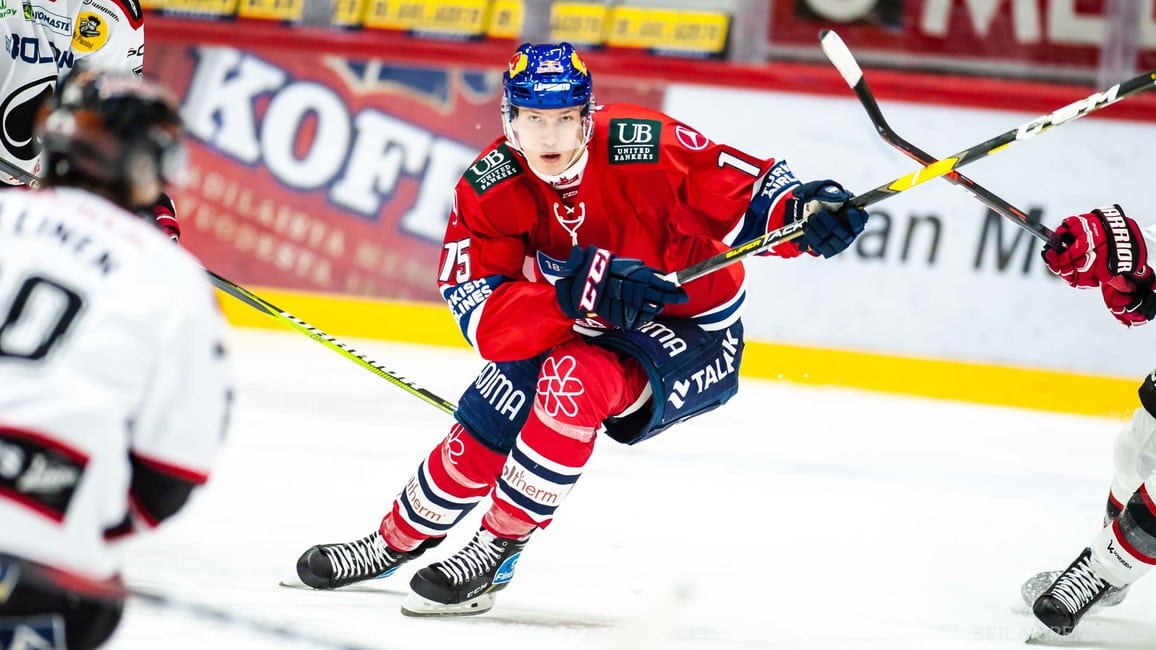 It’s been over three months since we last watched hockey, and we still have to wait until the season returns. However, there is one thing we can do — speculate about who the Anaheim Ducks will select at the 2020 NHL Entry Draft. Before the season was suspended, the Ducks held the fifth-overall pick. The NHL is still deciding when the draft will happen and what rule changes will take place. Either way, the Ducks will have a strong group of prospects to choose from. One player who’s name could still be on the board is HIFK forward Anton Lundell.

Taking Lundell at fifth overall might be considered a reach by some, but he’s a likely top-ten selection nonetheless. He’s ranked as high as seventh on Josh Bell’s Final 155 Rankings. However, he drops all the way to eleventh on Larry Fisher’s Final Top-500. With a log jam of two-way centers on the way, it would be interesting for the Ducks to select him, but it isn’t out of the realm of possibility.

Lundell spent the last two seasons playing against men for HIFK of the Finnish Liiga. As a 17-year-old, he posted 9 goals and 19 points in 38 games and followed that up this season with 10 goals and 28 points in 44 games. As Chris Faria mentioned in his profile on Lundell, he’s backed up his strong production with equally impressive underlying numbers (his 62.8 percent Corsi for leads his team), suggesting that he was dominant in every zone.

It’s a pretty impressive achievement to not only produce well offensively but have such a positive effect defensively as an 18-year-old playing against men. He had the opportunity to take on more responsibility than Alexander Holtz and Lucas Raymond had with their teams in the Swedish Hockey League.

Lundell enters the 2020 NHL Entry Draft as maybe the most well-rounded player of the crop. His hockey IQ is off the charts, and he uses it to excel in the defensive zone. Combine that with an active stick and smart positioning, and you’ve got a player who competes hard in all three zones. With the uncertainty of how Trevor Zegras will adapt to center in the NHL and a lack of a bonafide blue-chip prospect at the position, he provides the Ducks with an interesting option.

The knock on Lundell is that he lacks standout offensive skills that you would hope to see in a top prospect. It’s not that he’s not capable, rather it’s a common criticism for players who are labeled as elite two-way prospects. Lundell uses his elite hockey IQ to get into high danger positions on the ice. He’s a capable playmaker and has an underrated shot compared to the rest of his draft class.

Offensively, Lundell’s elite shot definitely makes him more of a shooter than a passer. His average of 3.7 shots per game (106 shots in 29 games) is high considering he averages just over 15 minutes. Passing-wise, only four of his assists (not including faceoffs) were passes of the primary variety during 5-on-5, but he’s been able to equally distribute his point production between 5-on-5 (11) and the power play and 3-on-3 combined (9). His vision is generally sound and the delivery of his passes are clean, but most of the chances he generates are off the cycle and created within short distances.

There’s no question the Ducks are in need of goal scoring, but bringing in a center who plays a responsible 200-foot game can open up space for some f the other creative forwards, such as Rickard Rakell and Zegras.

Even if Zegras establishes himself as a capable pivot at the NHL level, Lundell would provide the Ducks with a one-two punch down the middle, which they haven’t had since Ryan Getzlaf played with a healthy Ryan Kesler.

Where Does He Fit in Anaheim?

As mentioned, the Ducks have a logjam of young two-way centers. Sam Steel is already a full-time NHL player who has shown he can be a defensively responsible center at the next level. Isac Lundestrom has spent the last two seasons splitting time between Anaheim and San Diego and brings a similar package to Lundell, although with a lower ceiling.

Benoit-Olivier Groulx is fresh off a campaign that saw him win the Guy Carbonneau Trophy as the Best Defensive Forward in the QMJHL. He’ll be turning pro in 2020-21, and likely will join the San Diego Gulls in the American Hockey League. Don’t forget that Adam Henrique is also signed until 2024.

Although there are several players in front of him, it’s possible that Lundell shoots to the top of that list and makes one of the others expendable. If he was to join Anaheim for the 2020-21 season, there is a very real chance that he lines up as the Ducks’ third-line center behind Getzlaf and Henrique, which could push Steel to the wing.

Lundell has made a case as an NHL-ready prospect. He’s 6-foot-1 and 187 pounds and has been playing big minutes against men for the last two seasons. However, I could see the Ducks opt to allow him to return to HIFK for another season and flourish with 2022 draft-eligible prospect Brad Lambert.

It’s no secret the Ducks are amid a re-tool, a rebuild, a transition. Whatever you want to call it, the top priority is to bring in young talented players to replace their aging core. Having a one-two punch down the middle with Zegras and Lundell would allow them to move Steel down to the third line. With less responsibility and more favorable matchups, it could be a blessing in disguise for Steel as he adapts to the NHL.

Getzlaf’s contract is winding down and Kesler all but officially retired after hip resurfacing surgery, so the Ducks’ options in the middle are dwindling. Henrique could either be traded to fill other needs or left exposed to Seattle in the expansion draft. He’s still a solid middle-six option and should attract interest from a number of teams.

Either way, the Ducks have decisions to make once the 2020 NHL Entry Draft rolls around. There will be plenty of attractive options on the wing and defense, but if they opt to draft a center, they will add another path forward in their rebuild.