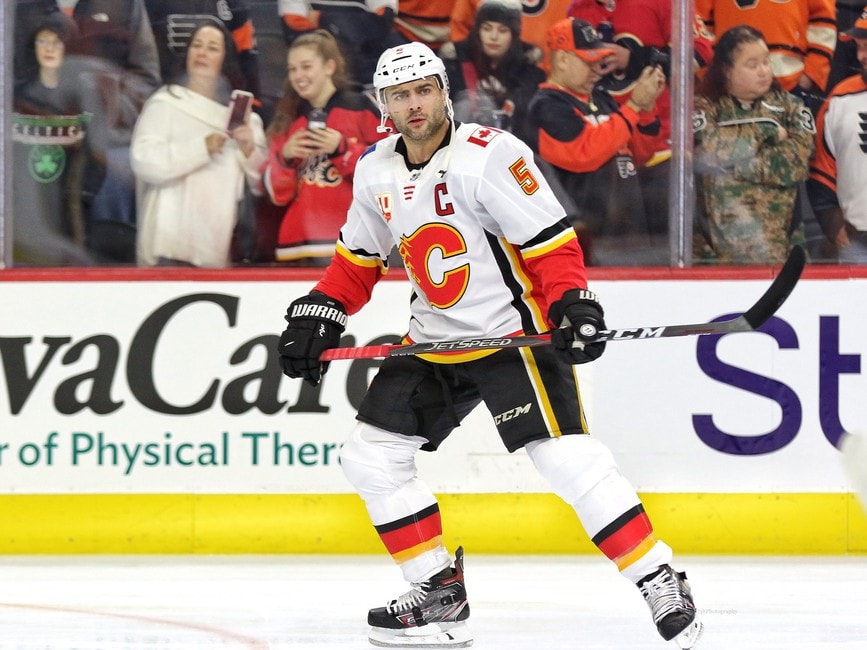 While many individuals on the Calgary Flames had disappointing seasons, one that didn’t seem to get as much chatter was team captain Mark Giordano. Coming off of a career year where he had posted 74 points and won his first-ever Norris Trophy, both fans and management were hoping for more of the same during the 2019-20 season.

Related: Islanders’ Lamoriello the Right Choice for GM of the Year

Unfortunately, that was not the case as Giordano saw a significant drop off in his offensive production with just 31 points in 60 games. Over an 82-game season, that pace would have had him at 42 points. One thing that is important to note is that prior to his Norris Trophy season, he had only broken the 50-point barrier once in his career, so this season’s total was more on par with what he has done in years past. Still, after his huge 2018-19 season, it felt disappointing, and has some wondering if it was perhaps the start of a decline.

One of the things that made Giordano’s Norris Trophy win even more impressive was that he did it at age 35. In doing so, he became the second-oldest player in NHL history to win the award for the first time, joining Nicklas Lidstrom, Al MacInnis, and Doug Harvey as the only defenceman ever to win the award at 35 or older.

While it was an incredible year and a great story, there is a reason why it is such a rarity. The reason being, of course, that most players have declined in a big way by that age, with many having to go overseas to continue their career or retire. Though he was still the Flames best defenceman this past season, he could see a rapid fall in play at any time given his age.

It was already mentioned above, but his stats took a big hit this year compared to the season prior. He managed just five goals and 26 assists compared to 17 and 57 in 2018-19. Of course, those numbers were down due to the season being canceled early, but they were well below last year’s pace. Valid reasoning for this is that many of the Flames forwards struggled to put the puck in the net this year, which could have hurt Giordano’s production. At the same time, the forwards’ production may have taken a hit due to Giordano not creating as much as he did last season.

Another stat that took a hit for Giordano this year was his plus/minus. While this stat has its flaws, it is still noteworthy that he went from a career-best plus-39 to just a plus-2 this season. Again, that certainly has a lot to do with the team struggling as a whole but is a significant drop off nonetheless. The one stat that remained nearly the same was his ice time, dropping just slightly from 24:14 to 23:53. That slight drop isn’t concerning, but it is something to pay attention to going forward.

While Giordano has never proven to be a great playoff performer throughout his career, his performance during the 2020 Playoffs was particularly bad. Not only was he unable to score a single goal, but he also put up just three assists in 10 games as his offense seemed to completely vanish.

Not only did he struggle offensively, but he also appeared out of sorts in the defensive end as well. He was often caught flat-footed and out of position, which played a big part in him taking six minor penalties throughout their short playoff run. At times, he truly did look old, as he was struggling with the top speed of opposing players. In his defense, it was tough for all players to get ready for this year’s playoffs given the circumstances, but it will be something to monitor next season.

As for what is next to come, it is a wait and see game. While it would be extremely shocking to see Giordano get moved at this point, the Flames would be wise to weigh all options. If there is a significant drop off in his play next season, they could be in some trouble. Giordano currently has two years remaining with a cap hit of $6.75 million per season. The last year on that deal could become a headache for the Flames depending on how he looks during the 2020-21 season.

Of course, maybe Giordano has a slow decline, where he is not the same player he once was but can still contribute. Or, maybe he will continue to be the team’s best defenceman over the final two years of his contract. Given that he will be 38 during the final season, it doesn’t seem likely, but who is to say for sure?

Related: Did the Bruins Lose the Kessel Deal?

If he is able to still be a valuable player for the Flames by the time the deal is up, perhaps they can even agree on an extension. For now, however, the hope is that he does not have a major regression in either of the next two seasons.