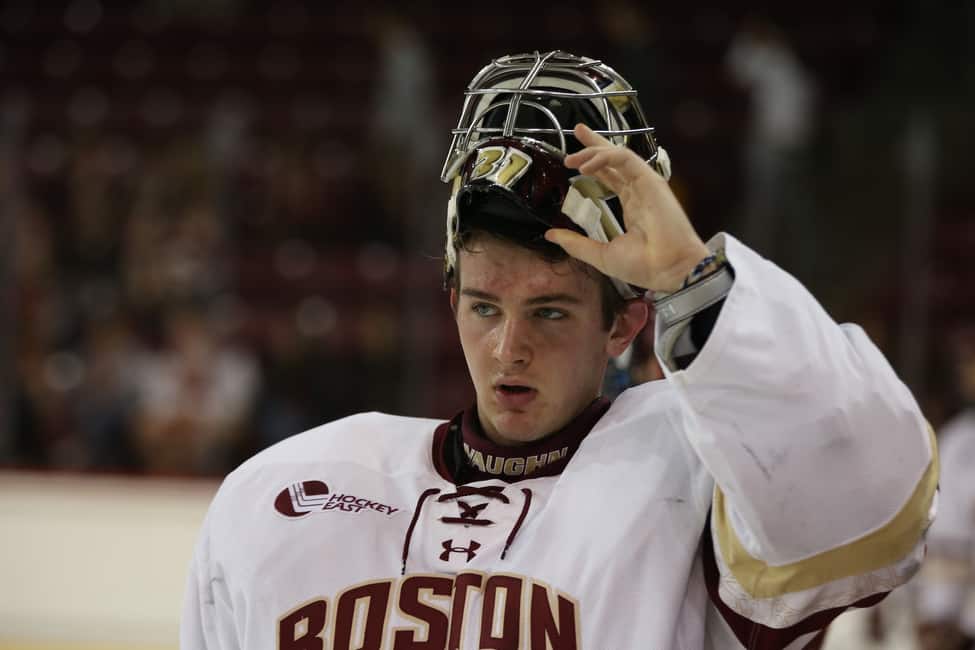 Yesterday, in his article in The Athletic, Corey Pronman reviewed what he believed were each NHL team’s biggest needs heading into the 2020 NHL Entry Draft on Oct. 6-7. His suggestion for the Toronto Maple Leafs was that they should draft a goalie or two. (from “Pronman: Biggest need for all 31 teams in the 2020 NHL Draft, The Athletic, 15/09/20)

Related: How the Maple Leafs Could Build the Best Fourth Line in NHL History

Pronman’s reason was simple and pragmatic. Although it’s too early to call the jury in on the organization’s two key goalie prospects, neither Joseph Woll nor Ian Scott had what you would call a good season. Woll could have played much better, and Scott could have simply played – he missed the entire season with an injury.

In this edition of Maple Leafs News & Rumors, I’m going to focus on the organization’s goalie prospects. Specifically, I’ll review the seasons these two key goalie prospects had as a backstory that might explain why Pronman made his suggestion.

What Was an Organizational Strength Changed into a Maple Leafs Need

Goalie prospects once projected as an organizational strength might have suddenly lost their shine. Or at least the finish seems a bit dull. Specifically, Woll didn’t look as strong as most expected he would during his season with the Toronto Marlies, and Scott missed the entire season because he was injured. Although neither will soon be dismissed from the organization, it isn’t too premature to seek some help in net for the Maple Leafs during this year’s draft.

A Look at Joseph Woll’s Season

Woll was chosen during the third round (62nd overall) of the 2016 NHL Entry Draft. He was a standout goalie at Boston College, but in his first season as a professional the 22-year-old struggled with ups and downs. In 32 games with the AHL’s Toronto Marlies, he posted an 11-16-3 record, with a goals against average (GAA) of 3.75 and a .880 save percentage (SV%).

Related: 10 Reasons Hockey Is the Greatest Sport on Earth

Woll admitted the transition to the AHL was difficult: “It’s been a bit of a roller-coaster. For the first time in my life, I had a lot of ups and downs that I had to deal with, but things like that make you better in the long run.”

Similar to other young goalies, the mental aspect of his game needs work. For example, I’ve heard other young goalies – for example the Vancouver Canucks’ Thatcher Demko – talk about the need to have a “quick turnaround mindset” to help them move past a poor start or a loss. As Woll hinted, he needs to improve his preparation to help him deal with the mental grind of being a goalie.

The youngster seems ready from a physical perspective, but he was less prepared mentally for the transition to the AHL. There’s little doubt he has the ability and potential to become the Maple Leafs’ goalie of the future, but right now he’s a work in progress.

A Look at Ian Scott’s Season

The Maple Leafs selected Ian Scott during the fourth round (110th overall) of the 2017 NHL Draft. He signed an entry-level contract with the organization in Dec. 2018. A year later in Dec. 2019, after a stunningly good 2018-19 junior season, the Marlies reported that the young goalie had undergone successful hip surgery to correct ongoing issues related to “impingement.” Although it’s anticipated Scott will be ready for the Maple Leafs 2020 training camp later this calendar year, he missed the entire season.

[By the way, in layman’s terms, hip impingement is a condition where there’s abnormal and wearing contact between the ball and socket of the hip joint. The increased friction caused by hip movements can damage that joint. Many athletes suffer extreme groin pain because of deep hip “flexion” or rotation during sporting activities – and it’s easy to imagine how goalies might be prone to that ailment.]

To give a sense of the high expectations the organization had for Scott, although he didn’t see any game action during the 2019-20 season, during the 2018-19 season, the Calgary native posted a record of 38-8-1-2 with a 1.83 GAA and a .932 SV% playing with the WHL’s Prince Albert Raiders. He also recorded eight shutouts, was named the CHL Goaltender of the Year, won the Del Wilson Trophy as the WHL’s top goalie, and was named as a WHL Eastern First-Team All-Star.

Scott also starred during the 2018-19 postseason with a 16-6-1-0 record, a 1.96 GAA and a .925 SV%. His five postseason shutouts helped lead the Raiders to the 2019 WHL Championship, where he was awarded the WHL Playoff MVP. By the way, Scott also represented Canada at the 2019 World Junior Hockey Championships. He played well.

Given Scott’s 2018-19 mega-season, you can see how his injury might have disrupted the Maple Leafs’ organizational plans. It was expected that Scott and Woll would develop a friendly rivalry as they rose through the ranks together as the two key Maple Leafs goalie prospects.

In July 2019, prior to Scott’s injury and surgery, Maple Leafs senior director of player development Scott Pellerin spoke about Scott’s progress: “If you look at his progression from when he was with the Marlies during the Calder Cup run and then to take that experience and have the season he just had, it’s unbelievable.”

While Woll needs to work on the mental aspect of his game, Scott needs to work on his consistency. Although no one can fault his play during the 2019 Playoffs, there were still inconsistencies. Specifically, during the Final in Prince Albert’s three losses he gave up 12 goals, but during their four wins he gave up only four goals in total – and that included two shutouts.

The Maple Leafs: Heading into the 2020 Draft

As the Maple Leafs head into the 2020 NHL Entry Draft, will general manager Kyle Dubas follow Pronman’s suggestion about drafting a goalie? Or, will Dubas and the organization simply draft whomever the organization believes is the best prospect – regardless of position?

Really, it won’t take long for Maple Leafs fans to find out. The draft is only three weeks away.