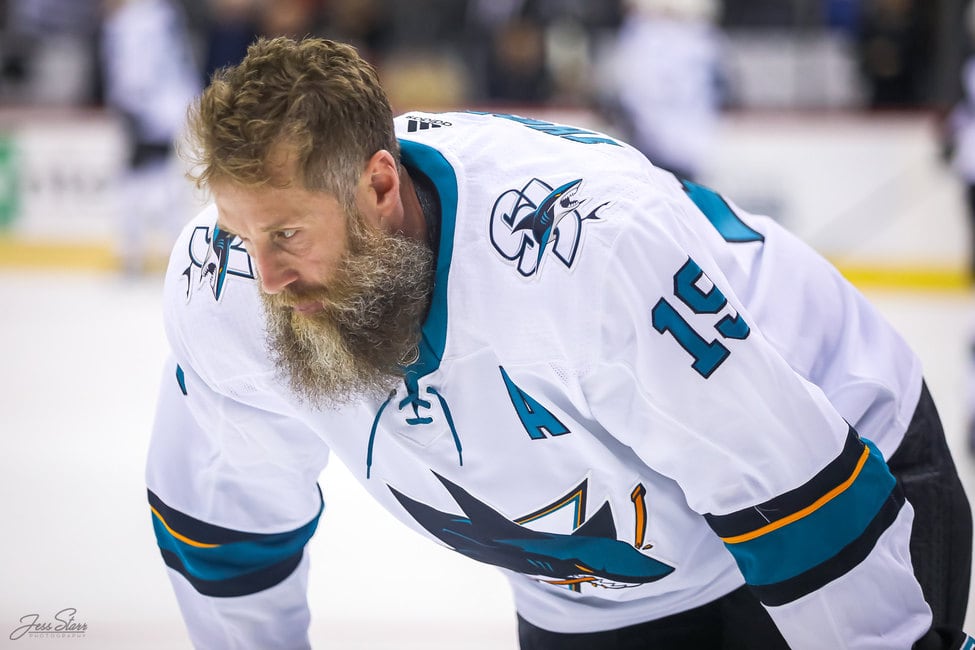 Here’s the truth. Joe Thornton might be old and slow, but he’s called “Jumbo” for a few reasons. If the Toronto Maple Leafs were fortunate enough to sign Thornton, he would bring attributes to the team that really would help them move forward toward a Stanley Cup.

That wasn’t a maybe from me. But, just so there’s no confusion about what I think, whenever I share rumors that Thornton and the Maple Leafs might be speed dating (probably a bad metaphor for a 41-year-old Dinty Moore look-alike), I hear from readers that he’s he’s too old and slow. Yeah, so?

With Thornton, What’s Changed in Many Seasons?

As far as his speed goes, Thornton’s not the fastest guy in the league. However, he’s been that way for a long time. And, even given last year’s poorer production (which the entire San Jose Sharks team experienced – it wasn’t like they were sailing along and Thornton was an anchor holding them back), he’s always been effective.

In short, Thornton’s a huge man with the skill, size, experience, and attitude to carry himself on the ice. He won’t be intimidated, and I trust he won’t let his teammates be intimidated either. A dash of that attitude on the Maple Leafs wouldn’t hurt.

If he were signed by the Maple Leafs and given fourth-line (or even third) minutes, I believe he’d prove to be a decent addition to the team. He’s 41 years old – which isn’t 20 years old, but it isn’t 75 years old either (as I can tell you). He’s got some juice left; whether he wants to pour it out on the ice in Toronto might be a different matter. But, I just can’t imagine a hockey player with all that he brings won’t be able to add value to a team – at least in spurts.

Yesterday, The Athletic’s James Mirtle followed up on speculation that the Maple Leafs and the veteran center were talking about signing a contract with the team. Mirtle isn’t alone. On the Steve Dangle Podcast, Sportsnet’s Chris Johnston also reported that the two sides were both interested. (from “What I’m hearing about the Maple Leafs pursuit of Joe Thornton,” The Athletic, 13/10/20).

Specifically, Mirtle noted: “These talks are in the beginning stages. It sounds like there’s some mutual interest. The Leafs, as they did during free agency in 2017, have let Thornton know he’s wanted. And Thornton is listening, from his offseason home in Switzerland, where he’s been training with a top-league club.”

It’s also reported that a number of Maple Leafs’ “star players” have “tried to sell” Thornton on the team’s upside following the strength of the team’s other offseason additions (such as T.J. Brodie, Zach Bogosian, and Wayne Simmonds). What does it say about Thornton’s reputation when Leafs players reach out to him personally about joining them in a quest for the Stanley Cup – something (like Jason Spezza) Thornton has never won? That’s rhetorical – the “star” players on the Maple Leafs must think he’d help.

History Suggests Thornton Wants Another Crack at the Cup

Thornton might not be ready yet to make any decision about next season, but stories about his career suggest he just loves to play hockey and that his attitude is “there are no bad days at a hockey rink.” My reading suggests he’s always been that way.

There’s a rumor he might even play in Switzerland because he’s done that twice before and obviously enjoyed it enough to return. This talk about playing in Switzerland also suggests that Thornton isn’t always motivated by money. That said, Cap Friendly estimates Thornton has already made $109,187,195 dollars in his career.

The questions are (a) whether Thornton is motivated by winning a Stanley Cup and (b) whether he thinks the Maple Leafs might be a contender. If so, all this talk might be more than just rumors and speculation.

Here’s what we know. Given that Thornton was upset when the Sharks didn’t move him to a contender at last season’s trade deadline, we’ve got to believe he wants another crack at the Cup. He seems to be interested in getting one more chance with a good team that could help him chase that Stanley Cup that’s escaped his reach.

All that’s left is answering the last question: are the Maple Leafs good enough in Thornton’s eyes?

The last word we have on Thornton comes from Mirtle yesterday, who wrote that he’s heard, “It’s now in [Thornton’s] hands.” If Thornton is willing to sign a Spezza-like contract, something might be afoot. Certainly, the Maple Leafs seem interested in taking a shot at him in a bottom-six role.

What Else Might Thornton Bring to the Maple Leafs?

About two years ago, an interesting article written about Thornton talks about his personality. The article noted that his personality is “some mixture of happy-go-lucky, competitive, loyal, warm, and zany.” His long-time teammate and friend Brent Burns lovingly labeled Thornton “a piece of work.”

In that article, Sharks general manager Doug Wilson noted, “I first met him in 1997 at the world juniors, and he had it then and he hasn’t changed to this day. Pure, unadulterated passion, and love for the game. I’ve been in the business for 40 years, and I’ve never been around anybody like that.”

Then-Sharks head coach Pete DeBoer added that Thornton was a “nucleus of joy” in the dressing room. Specifically, DeBoer called him a “magnetic personality” and suggested that “you want to find him in the morning, really, because after a bad game he energizes you, always in a positive way. There are no bad days at the rink for Joe.”

My reading suggests that Thornton is older and slower, but that he brings a number of attributes that the Maple Leafs might find helpful as they take their next crack at the Stanley Cup. He’s big. He’s experienced. He’s skilled. He’s calm. He loves to play. Finally, he brings positive leadership into the dressing room.

Of course, old and slow are important, but effective trumps them. Thornton is Jumbo – size, skill, experience, personality, and dressing room leadership.