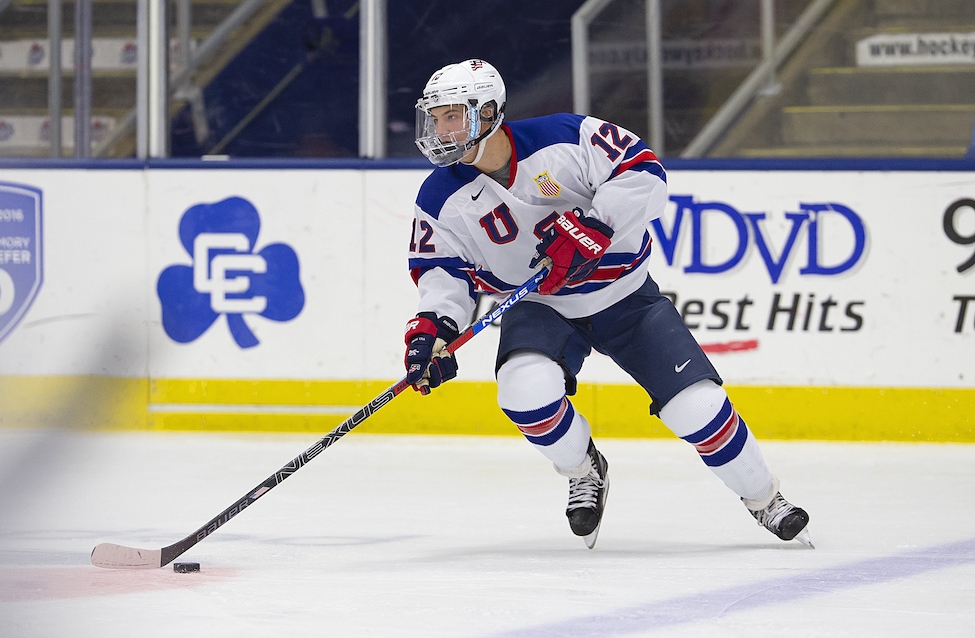 The 2020 NHL Entry Draft saw 216 young men selected to possibly play in the NHL some time down the road. Some we may see as early as this coming season; some may never hit the ice in an NHL jersey. Shortly after the draft, I had the opportunity to speak by telephone with the University of Notre Dame freshman Ryder Rolston, who was picked in the fifth round. His name was called at #139 by the Colorado Avalanche.

The Hockey Writers: What one word best describes how it feels to be drafted into the NHL?
Ryder Rolston: Speechless

THW: Were you watching the draft?
RR: Yeah, with my Mom, Dad (former NHL standout Brian Rolston, a 1991 first-round pick by the New Jersey Devils), and my three brothers. We watched both days.

THW: Did you keep watching after your name was called?
RR: Yes.

THW: Did you follow any of the pre-draft predictions or mock drafts?
RR: I tried not to look at them, I wanted to be open for anything. And, I did a pretty good job at that.

THW: How many teams did you speak with prior to the draft?
RR: Probably 25 or 28?

THW: Did your Dad give you any smack for being drafted later than him?
RR: No, none at all.

THW: Was there anybody else you were particularly following during the draft?
RR: Absolutely! My best friend growing up, [Antonio] Stranges. He was picked by Dallas, #123. We grew up together playing hockey and we still train together in the summer.

THW: Do your brothers play hockey?
RR: Yeah, they’re just as serious about it as am. My dad is coaching two of my brothers.

Will Rolston Make it to the NHL?

It takes a few years for players outside the top few to develop and become NHL-ready. But if we look at past drafts, the fifth round has not been a wasteland for NHL talent. For example, in 2017 the #139 pick (where Rolston was selected) was used by the New York Islanders to draft Sebastian Aho, who has shown promise in his 22 NHL games. The 2016 NHL Draft has produced five fifth-round picks with at least a couple of games of NHL experience.

Players drafted five years ago in the fifth round has accounted for 760 games of NHL experience. Young men drafted in the fifth round of the 2014 NHL Entry Draft have played 480 games, including 108 games by Anders Bjork (Boston Bruins), another former Notre Dame player.

The 2011 NHL Entry Draft’s fifth round was stellar – a dozen players have already accounted for over 1,300 NHL games (and counting). Included in this list is Andrew Shaw, who has his name engraved on the Stanley Cup twice with the Chicago Blackhawks (2013, 2015). By the way, he was selected at #139, the same pick as Rolston.

As productive as the 2011 NHL draft’s fifth round was, it pales in comparison to the year prior. In 2010, 14 of the 30 players drafted played in the NHL, totaling (to date) 2,741 NHL games. Ten of those players were active in the NHL during the 2019-20 season, including Brendan Gallagher, John Klingberg, Micheal Ferland, Zach Hyman, Chris Wagner, and Petr Mrazek.

So, what does this portend for Rolston? In a word “nothing.” The 139th pick in the fifth round has produced varied results over the past 10 years. Will he play at least 530 games like Andrew Shaw (2011), or show the promise of Aho (2017), or never suit up for an NHL team? Time will tell. But based on my conversation with this young man and watching tape of his play, he has the drive and talent to make it in “The Show.”

Landon Slaggert, Rolston’s teammate on the Fighting Irish, was also selected in the NHL Entry Draft, picked at #79 by the Chicago Blackhawks. Slaggert was unavailable for an interview – for a very good reason. He was participating in the Team USA’s 2021 U.S. National Junior Team Evaluation Camp in Colorado.

As a third-round pick, history shows that the odds of making it to the NHL are higher for Slaggert. Over half of the players drafted in the third round between 2006 and 2015 played at least a game in the NHL (155 of 300). During those drafts, six of 10 young men selected with the 79th pick (as was Slaggert) played in the NHL. Among them is Brayden Point of the Tampa Bay Lightning, runnerup for the Conn Smythe Trophy as MVP of the 2020 Stanley Cup Playoffs.

I wish the very best for both Rolston and Slaggert and look forward to (hopefully) seeing them play in the NHL in the coming years.