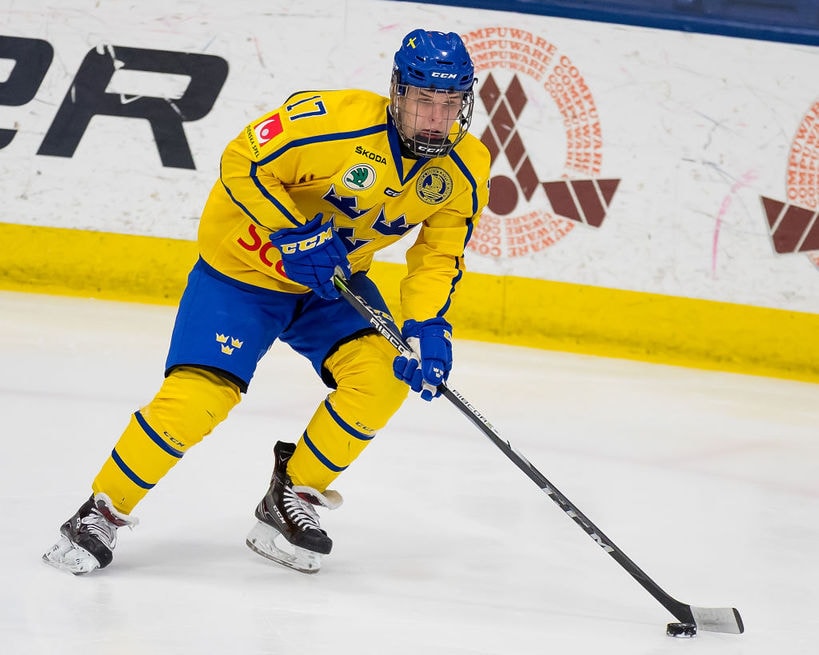 A Columbus Blue Jackets prospect playing in the KHL is on a four-game goal streak, a Detroit Red Wings former second-round pick is dominating to start the 2020-21 Swedish Hockey League season, and the Florida Panthers AHL affiliate sign two draft picks from the 2019 NHL Entry Draft to one-year AHL contracts.

Blue Jackets’ prospect Kirill Marchenko is starting to heat up to begin the 2020-21 KHL season. After being held pointless in his first six games, he’s now scored goals in four straight games amassing a total of six points in his last five games played. His latest exploit came against Vityaz, in which he made a nice cut into the slot and wired home SKA St. Petersburg’s first goal of the game.

Drafted 49th overall in the 2018 NHL Entry Draft, Marchenko is an exciting prospect in the Blue Jackets system. He featured for Russia in the 2020 World Junior Championship, producing two goals and six points in seven games played while winning a silver medal. He finished tied for fifth in team scoring with Montreal Canadiens prospect Alexander Romanov. Blue Jackets fans will have to wait a little longer to see Marchenko in the NHL. He signed a new deal with SKA in December that runs through the 2021-22 KHL season.

Red Wings’ prospect Jonatan Berggren has been dominating since the start of the 2020-21 SHL season. Berggren plays for Skellefteå AIK in the SHL, it’s his fourth season playing for the club at this level. He has points in all but one of the nine games he’s played so far. In that time he’s amassed two goals and 11 assists for 13 points. He currently sits second in league scoring, trailing only Marek Hrivík. He could’ve been one point closer to the lead, but he had this goal disallowed earlier this week.

During the 2019-20 season, he put up 2 goals and 10 assists in 24 games played. In 15 fewer games, he’s already surpassed his previous career-high in points, and is one goal away from surpassing his goal total from 2019-20. He plays with on the same team as Nashville Predators prospect Adam Wilsby, Anaheim Ducks sixth-round pick Albin Sundsvik, and Edmonton Oilers top prospect Philip Broberg.

Drafted 33rd overall in the 2018 NHL Entry Draft, Berggren is a part of the new wave of Red Wings’ prospects who are looking to bring the franchise back to glory. He played an important role for Sweden in the 2020 World Juniors, amassing one goal and four assists for five points in seven games played. He finished tied for six in team scoring with New Jersey Devils prospect Alexander Holtz and won a bronze medal.

The Charlotte Checkers have signed forwards Greg Meireles and Matthew Wedman to one-year AHL contracts. Both Meireles and Wedman were draft picks for the Florida Panthers in the 2019 NHL Entry Draft and have recently finished their careers in junior hockey in the Canadian Hockey League.