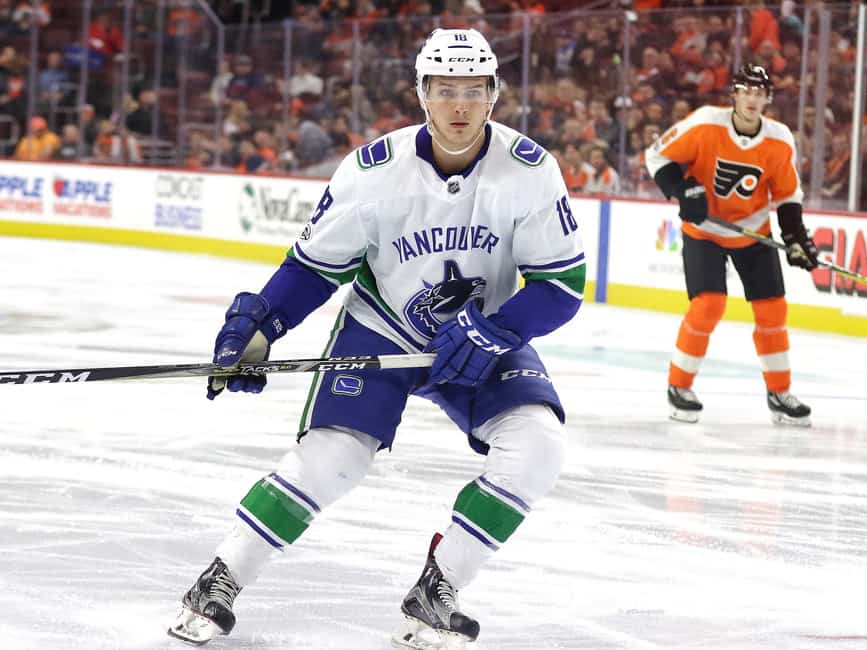 Break out the beers, the legend of #ShotgunJake will continue in Vancouver for another two years. On Oct. 22, the Vancouver Canucks avoided arbitration by re-signing Jake Virtanen to a two-year, $5.1 million contract. By finalizing a deal before the scheduled arbitration hearing on Oct. 28, the Canucks must believe Virtanen can improve on the 18 goals and 18 assists he scored during the shortened 2019-20 season.

In the press release, Canucks general manager (GM), Jim Benning, said that Virtanen has continued to make progress on his two-way game and remains a contributor offensively, using his speed and size to generate chances. Benning spoke highly of the 24-year-old winger and will look forward to seeing him take steps in his growth next season to help the team be successful.

Since Virtanen avoided arbitration, here’s a brief look at how a few other Canucks players performed before and after their hearing.

In 2009-10, Raymond scored 25 goals and 28 assists in 82 games while playing on the Canucks’ second line with Ryan Kesler and Mikael Samuelsson. After that career season, he had earned a raise considering he was paid $760,000, but the Canucks and Raymond were unable to agree on the amount.

While management waited to see market comparisons, the restricted free agent filed for arbitration. After the hearing, the two sides agreed on a two-year, $5.1 million contract (from ‘Raymond files for salary arbitration,’ The Province, 07/05/10). Looks oddly familiar, doesn’t it?

The following season, the Canucks won the Presidents’ Trophy but Raymond wasn’t able to surpass his career numbers. It didn’t help that he missed 10 games due to a broken thumb, and he concluded the 2010-11 season with a serviceable 15 goals and 24 assists in 70 games. Over the next two seasons, which included the 2012-13 NHL lockout, Raymond never scored more than 22 points.

Evaluating this deal now, Raymond managed to strike while the iron was hot. Does Raymond’s arbitration experience provide a glimpse into Virtanen’s future or will he become a valuable role player like the next Canuck?

As Raymond celebrated a career season, another Canuck who was heading towards arbitration was also improving. In 2009-10, Jannik Hansen scored 9 goals with 6 assists in 47 games while playing on a two-way deal that paid him $550,000.

Just before the beginning of his second full season with the Canucks, he hurt his hand in a fight that kept him out of the lineup until mid-November. After missing 19 games, Hansen returned and played until the coaching squad took advantage of his two-way deal and sent him down to the AHL for a 10-day conditioning stint.

He returned in time to show management enough to file for arbitration with teammates Raymond and Tanner Glass, who after his hearing, signed a one-year contract worth $625,000. After Hansen’s arbitration hearing, he was awarded a one-way deal worth $850,000 and earned it by scoring 9 goals and 20 assists in the regular season and 3 goals and 6 assists in the 2011 NHL Playoffs.

After that season ended in heartbreak, Hansen was awarded a three-year, $4.05 million contract. The first season of that deal was his best in the NHL, with 16 goals and 23 assists in 82 games. If Virtanen can continue to contribute and develop like Hansen, who showed us that he could become a fixture in the lineup, then this glimpse into the future is enticing.

In 2001-02, Brendan Morrison became one-third of the Canucks’ famous West Coast Express line that had an excellent season. He started the season bouncing around the lineup, and he didn’t regularly team up with Markus Naslund and Todd Bertuzzi until Jan. 2002. By taking advantage of this opportunity, Morrison went from being a third-line player to the driver of the West Coast Express which also led to Morrison winning his arbitration case, a two-year deal worth $4.6 million.

In the season before he became a restricted free agent, Morrison was paid $775,000 and scored 23 goals and 44 assists in 82 games. After he was re-signed, his encore produced career-highs of 25 goals and 46 assists in 82 games. However, after that 2002-03 season, his numbers declined and the boost he got from his linemates was negatively impacted by Bertuzzi’s indefinite suspension for you know what.

Related: Bruins That Got Away – Kris Versteeg

Speaking of benefitting from his linemates, there’s a funny story about Morrison’s salary arbitration hearing. An attorney for the Canucks tried to belittle Morrison’s contribution during the just-concluded season by likening Bertuzzi and Naslund to elephants. Later, Patrick Burke confirmed this story:

It’s about a mouse hitching a ride on an elephant to wade across a rushing river. They get to the other side and the mouse says “Good for us! We made it over!” French lawyer screams “BRENDAN MORRISON IS DA MOUSE!”

Regardless of the lawyer’s statement, the outcome landed in Morrison’s favour whose position elevated the talent around him to create one of the most electric lines in the history of the team. If ‘Shotgun Jake’ Virtanen gets a similar opportunity to play with the Canucks’ elephants, perhaps fans will get to create a fancy new nickname to go along with their stocked beer fridges.