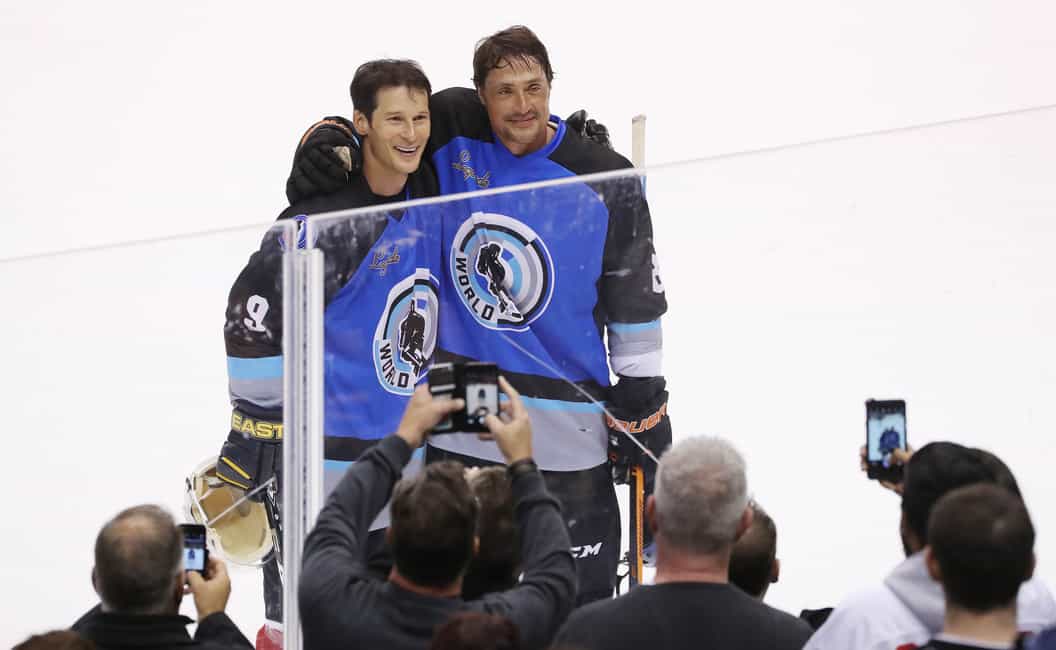 Teemu Selanne, Paul Kariya, and Scott Niedermayer are hockey legends in Anaheim, pure and simple. This trio of Anaheim Ducks icons were the faces of the organization at one point or another. They were the first jersey numbers to be hoisted into the Honda Center rafters symbolically over the course of their more than 25-year history. After the retirement of these greats, the eventual retirement of their jersey number when they were the face of their era or a Stanley Cup team makes fans of the organization nostalgic for the eras that knew these greats firsthand.

Jersey retirements are the quintessential theme for having the true team bond that sometimes is missing when a team goes through a drought period. Watching a jersey retirement is like the 4th of July, every person imaginable becomes overly patriotic or prideful of one’s team.

Over the course of their 27-year history, numerous Stanley cup playoff runs, one Stanley Cup win, a sale from Disney, and the subsequent rebranding, one thing remained consistent, the Ducks had no jerseys hanging in the rafters beneath the spotlight of the arena lights.

So what exactly do jersey retirements achieve for a fan base?

Kariya’s Outlook on His Number Retirement

In an interview with the LA Times, Kariya’s humbling attitude shined through, “I would never consider myself to be deserving of any recognition and certainly not one of this magnitude. I’m still wrapping my head around it.” (from ‘Column: With his jersey set to be retired, former Ducks star Paul Kariya is riding a wave of happiness,’ LA Times, 10/20/2018)

His humble demeanor and stellar athleticism led him to the Hockey Hall of Fame.

In 1934, Ace Bailey of the Toronto Maple Leafs made history as the first professional athlete to have a jersey hoisted in the rafters. Since then, the sport has changed and evolved in literally every aspect and has seen dozens of pro-athletes have their jersey numbers retired.

Jersey retirements honor a remarkable player and are typically bestowed on an athlete after they retire, left the team, or die. Iconic numbers such as 99 in hockey and 42 in baseball are retired league-wide in their respective leagues because they exemplify the sport and their upstanding integrity and grit to overcome and excel despite hardship. These numbers are the only two jersey numbers to be retired league-wide across all sports and rightfully so. Of the 122 jerseys retired in the NHL, only a meer 40 of them are not in the Hockey Hall of Fame.

Up until the 25th anniversary of the Ducks, no jersey number seemed deserving to be retired. However, as the team’s fanbase grew and boosted their standing as the first successful California team to grace hockey and bring the Cup home the Ducks were a competitor, not just a Disney organization. Selanne, Kariya, and Niedermayer together revolutionized the Ducks and became some of the greatest legends in West Coast hockey history.

Fans come and go but the love of the sport stays forever. While bandwagoning is an issue in every sport, hockey fans have grit and style which is embodied every season when superstitions are in full swing and facial hair grows with the length of their team’s playoff run. However, now and then cap space is low, players are aging out, and fan spirit is slipping even for the most dedicated fans.

To some though, as fan pride slips so does the desire for athletes to push themselves to become the best athlete that could turn the slump around. To others though, times like these are the most desirable for a change or a glimmer of hope brought back to the fading fans. While the Ducks were not quite this bleak during their 2014-15 season, in fact, they were at the top of the standings, the jersey retirement of Selanne sparked pride and a sense of belonging even when the team was at the top of their game.

In an article from CBC News, Selanne fans were so excited for a chance to see his number hoisted into the rafters and retired, Jets fans headed south to witness the historical event.

Being a fan at a jersey retirement is the best experience to build spirit and pride in the team yet again. In a climate of decline in fans in stadiums, an article from USA Today shows that fans of losing teams were more likely to stop coming to games. With that in mind, jersey retirements say more about a team than just the strength of an athlete, it speaks to the fan and the organization’s legacy.