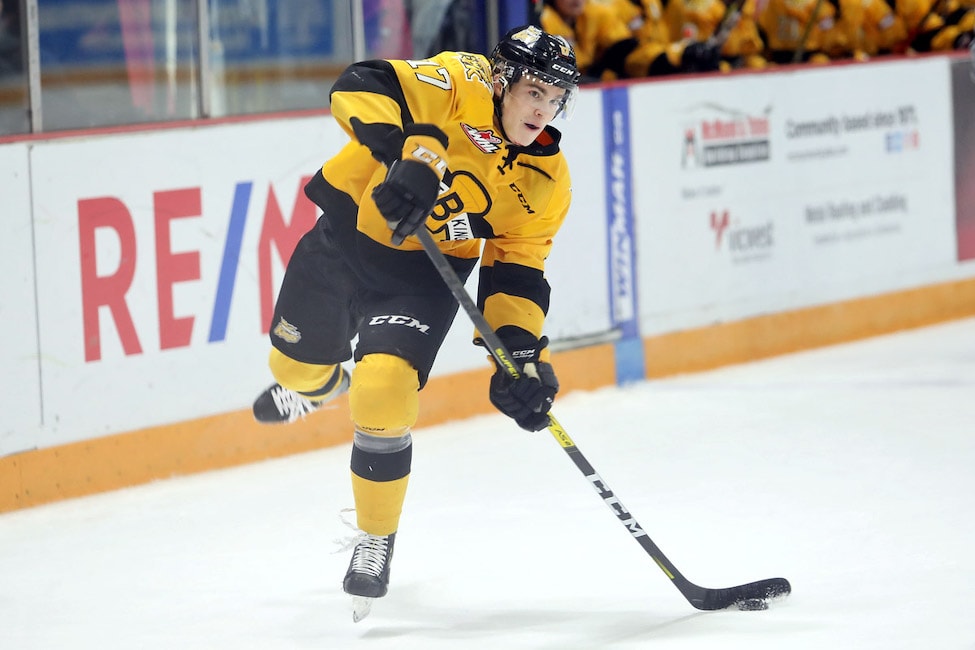 Heading into next month’s IIHF World Junior Championship, Canada has to be considered the odds-on-favorite for the gold medal with an absolutely stacked roster. However, they are still waiting for the arrival of a recent first-round pick of the Ottawa Senators after a positive COVID-19 test. Also, the Big Ten was back on the ice last night and we saw goals from top prospects of both the Vegas Golden Knights and Colorado Avalanche.

Team Canada has been hard at work at their World Junior Championship evaluation camp the past couple of days. Their roster is frankly unfair with a whole slew of recent first-round picks like Quinton Byfield, Bowen Byram, Dylan Cozens and Kirby Dach.

One top draft pick who has yet to join the camp is Ridly Greig. According to Ryan Rishaug of TSN, his agent, Kevin Epp, has disclosed that Greig tested positive for COVID-19 on Nov. 8. Epp confirmed that the young forward is asymptomatic and is quarantined at home. He will join his teammates sometime around Nov. 22 after his 14-day lockout is over.

Grieg was the last of three first-round picks made by the Senators at last month’s NHL Entry Draft, selected 28th overall. He is a well-rounded, two-way forward who scored 26 goals and 60 points in 56 games for the Brandon Wheat Kings of the Western Hockey League (WHL) last season.

The forward depth chart for Team Canada is insane, so missing the first two weeks of camp puts Greig behind the 8-ball. He will have to work even harder to show he is worthy of a roster spot when the tournament begins the day after Christmas.

The University of Michigan has one of the most talented rosters in all of the NCAA. They boast one of the best freshman classes ever assembled in college hockey to go along with a handful of players who have already been drafted by NHL clubs.

The Wolverines started a two-game series at the 14th-ranked University of Wisconsin on Thursday night. One of those talented freshmen, Brandon Brisson, who was drafted 29th overall by the Golden Knights last month, scored the first goal of his collegiate career.

With the game tied 1-1 in the second period, Brisson struck on the power play to give Michigan their first lead of the night.

This goal was one of three scored by the Wolverines in the middle frame as they went on to a 5-2 victory. Michigan’s talented freshman class had a big night. Brisson added an assist to go along with his power-play tally. San Jose Sharks’ second-round pick Thomas Bordeleau had a pair of assists while Kent Johnson and Matty Beniers each had a helper in the victory.

The Minnesota Golden Gophers kicked off their 100th season of hockey by hosting the Penn State Nitty Lions on Thursday night. The perennial college hockey powerhouse is ranked No. 11 as the season starts and they opened up with a solid 4-1 victory over Penn State.

After Jonny Sorenson, Scott Reedy and Cullen Munson scored to give Minnesota a 3-1 lead, Sampo Ranta capped off the scoring with this beauty in the third period.

Sampo was able to kick it into an extra gear and use his speed to get behind both Penn State defenders. He then used his body to shield the puck before going backhand/forehand for his first goal of the season.

Ranta was drafted by the Avalanche in the third round (78th overall) of the 2018 NHL Entry Draft. He made the trip to North America from his native Finland back in 2016 to play in the United States Hockey League (USHL). He had a breakout season with the Sioux City Musketeers, in 2017-18, when he scored 23 goals. He has been very consistent in his two seasons with the Golden Gophers, scoring 18 goals and 36 points in 71 games. His combination of speed, size and skill make him an intriguing prospect.