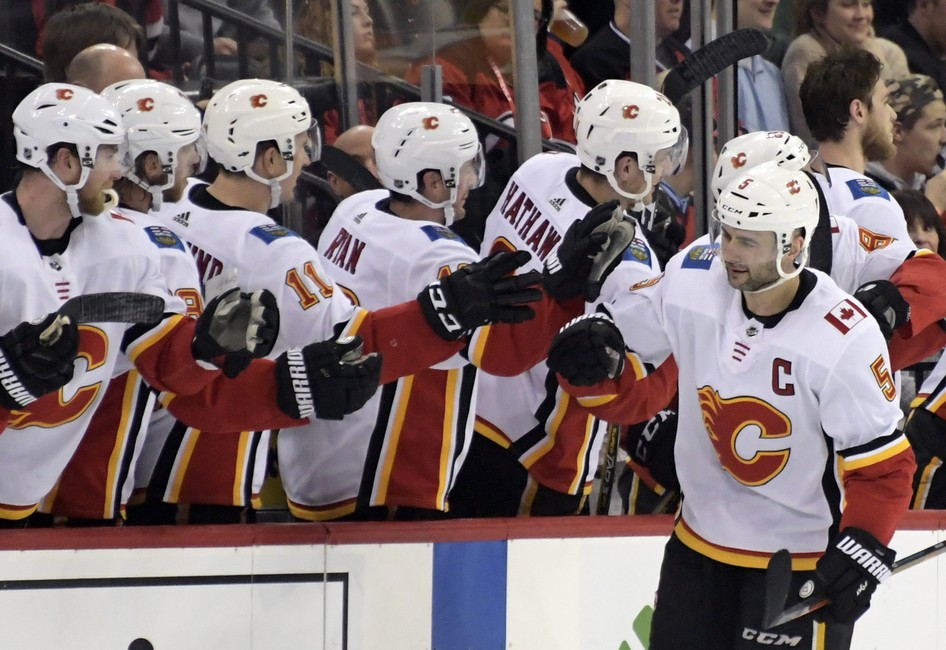 I know, I know. Even asking the statement seems ludicrous, almost blasphemous for many of the Calgary Flames faithful.

The stalwart defenseman is only a year removed from winning the Norris Trophy and is seen by many as the heart and soul of this team. The guy bleeds red! Well, yes, technically I guess we all bleed red, but Mark Giordano bleeds Flames red – from the moment he was signed as an undrafted free agent in 2004.

Nobody can question his effort on the ice, his presence in the room, his commitment to the team, or his charity work in the community. He was the obvious choice to succeed Jarome Iginla as team captain in 2013, so what’s my big problem with No. 5 continuing to wear the C?

Why am I even suggesting something so… ludicrous?

For me, it’s all about the constantly evolving demographics of today’s NHL. You’ve probably heard it’s becoming a young man’s game? That would be a major understatement. Did you know the average age of a Columbus Blue Jacket player is only 25.9? I have elbow pads older than that.

At 37, Giordano is a full decade older than the Flames’ average age of 27.5. He says he continues to feel “young and fresh,” but his sub-par performance this past season and in the 2020 Stanley Cup Playoffs would suggest otherwise. How much longer will he be a top-pairing guy? Is he still the team’s best defenseman?

I think the Flames’s captain should be one of the team’s young guns, following the lead of the Oilers, Vancouver Canucks, Buffalo Sabres, Florida Panthers and Colorado Avalanche. The average age of those captains is 24.8 years. Does that mean Geoff Ward should immediately strip Giordano of the C?

This transition has to come from Giordano himself, and it has to come before his skill-set falls off a cliff. This wouldn’t be the first time a veteran NHL captain has seen the writing on the wall and gave up the C to a younger model.

Former Avalanche captain Milan Hejduk gave way to a 19-year-old Gabriel Landeskog, who became the youngest captain in NHL history. Heck, there’s even precedent for this happening within the Flames organization. Who can forget Craig Conroy willingly and unselfishly passing the torch to a 26-year-old Iginla in 2003?

You might recall our neighbours to the north made the tough decision to relieve an increasingly irrelevant Andrew Ference of his captaincy. His minutes were diminishing while languishing on the third pairing, and the Oilers wanted to avoid the embarrassment of having their team captain watch games from the press box. You simply can’t have your leader be a healthy scratch.

Is Giordano in Ference territory now? Nope, but his current contract expires in 2022, and he’ll be pushing 40 years old when it happens. It’s not inconceivable that Giordano will be a third-pairing guy by then, and I’m quite certain even he would admit that’s not where a team leader should be playing.

The longest serving alternate captain is Sean Monahan, but I don’t think the soft-spoken centre has the requisite amount of fire in his belly to truly rally the squad. Although, who can forget his first ever NHL fight against the Oilers’ Ryan Nugent-Hopkins last season?

Next up is Mikael Backlund, who has been with the Flames since 2009, an alternate captain for a few years and is widely seen as one of the best two-way centres in the league. He’s proven that he can lead a team to victory after captaining Team Sweden to gold at the 2018 World Hockey Championships. But, at age 31, he’s not the young gun I’m looking for.

For me, the only choice for the team’s captaincy is the Flames’ third alternate captain and current highest paid player, Matthew Tkachuk. Chucky has it all – great hands, real grit, and a penchant for pissing off everyone he plays against. Very few players in the NHL have both elite offensive skill and an ability to play down in the trenches the way he can. At only 22 years old, Tkachuk has a huge personality and he just signed a multi-year deal – he’s the new face of the franchise.

The sooner Giordano figures out his time as captain of the Flames has come to an end, the better. He’s been a great leader for seven seasons, but he’s not the “young and fresh” choice the team needs moving forward.