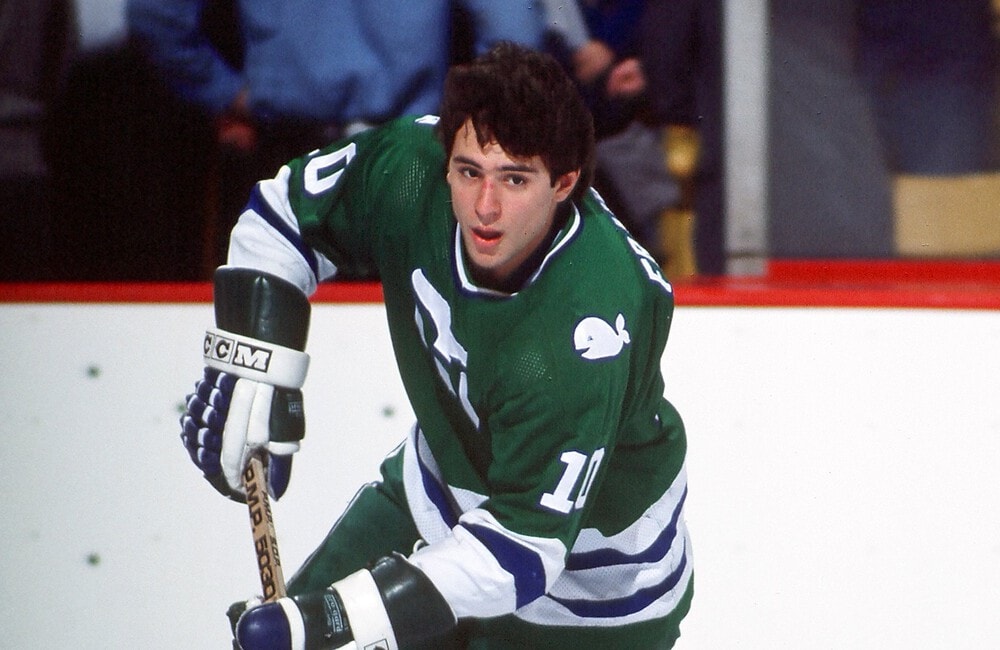 Players and even franchises come and go, oft-forgotten to the pages of history, but some remain in legend and folklore. Though the Hartford Whalers were a struggling franchise for much of its existence, legends still emerged.

With the announcement that the Carolina Hurricanes will wear the revered Whalers colors and logo as their Reverse Retro jersey for the upcoming season, it’s time to look at a starting lineup of the greatest players ever to put it on.

When nostalgic fans think back on Whalers’ history, Ron Francis is usually the first player to come to mind. He was the face of the franchise during its run in the World Hockey Association (WHA) in the ’70s, helping lead the club to its first and only championship in the 1972-73 season. He continued to dominate after the NHL merger, spending nine-plus seasons with the Whalers before being traded to the Pittsburgh Penguins. He returned to the franchise in 1998 and spent six seasons in Carolina, leading the team to its first Stanley Cup Final appearance in 2002 and had his No. 10 hung in the rafters in Raleigh.

Francis’ name resides at the top of nearly every offensive statistical category for the Whalers, including in games played (1,186), goals (382), assists (793) and points (1,175). He stands fifth on the NHL’s all-time scoring list with 1,789 total points and was elected to the Hockey Hall of Fame in 2007.

He ended his career with a Selke Trophy, a King Clancy Trophy and three Lady Byng Trophies. Francis is now hoping to ignite another young franchise with the Seattle Kraken as its first general manager.

While Francis helped jump-start a young Whalers franchise, Kevin Dineen was there for its inevitable conclusion. Dineen spent the first seven-plus years of his career with the Whalers before being traded to Philadelphia. He was eventually moved back to Hartford and led the team in its final two years in Connecticut.

Dineen ranks second in club history with 252 goals and 534 points. He retired in 2002 a two-time All-Star, a Calder Trophy and Selke Trophy winner and was the last captain before the franchise’s move to Carolina and scored the last goal in Whalers history. In 2006, he had his No. 11 honored by the AHL Hartford Wolf Pack alongside former teammate Francis.

Though it’s not the team that comes to mind when you think Gordie Howe, Mr. Hockey played three remarkable seasons with the Whalers.

Howe joined the team in 1977 at the ripe age of 49 years old with two of his sons, Mark and Marty, where he played in 214 games in three seasons and registered 190 points. Howe’s legendary status helped ease the team’s transition to the NHL before his retirement in 1980 after 25 years of professional hockey. His No. 9 was retired by the team a year later.

While Francis is enshrined in Whalers lore for his flashy offensive play, defenseman Rick Ley is often the forgotten man among team legends.

After spending four seasons in Toronto, Ley joined the New England Whalers in 1972 in its inaugural season in the WHA. Along with Francis, Ley helped the team capture the AVCO Cup in its first campaign and remained with the club through its entire seven-year WHA run.

Ley eventually retired in 1981, holding the WHA record for most games played with a single team at 478. He spent six years as the Whalers’ captain and had his No. 2 jersey retired after his career.

Glen Wesley was already an established star in the league when he was moved to the Whalers prior to the 1994-95 season. Though he joined a flailing franchise by the mid-1990s, he would remain with the franchise for over 13 years (apart from a seven-game stint with Toronto).

Wesley ranks behind only Francis in career games played with the organization with 913. He was part of the Hurricanes’ run to the Stanley Cup Final in 2002 and finally lifted the Cup for Carolina in 2006.

He remains the only defenseman to have his number retired by the organization and was with the team as Director of Defensemen Development until 2018. Like Dineen, Wesley scored in the last Whalers game ever.

Behind every legendary championship run is a legendary goalie.

Al Smith clogged the net for the Whalers during the 1972-73 season that ended with a WHA championship. Smith played three initial seasons with the Whalers, winning 94 games before being moved to Buffalo. In 1979, his NHL rights were retained by the Whalers prior to the expansion draft. He eventually became the club’s all-time leader with 141 wins in six seasons.

Pat Verbeek was named to two All-Star teams in his tenure with the Whalers and was named captain for his final three seasons in Hartford, tallying 403 points in 433 games.

Verbeek retired in 2002 with 522 goals, 540 assists in 1,424 NHL games. The 5-foot-9 winger’s success in the NHL with his fast-paced and hard-nosed play style has paved the way for future hockey players under six feet. He was inducted into the Connecticut Hockey Hall of Fame in 2012.

Nick Fotiu is not the statistical legend like most others in this lineup, but more of a memorable fan favorite of the beloved Whalers franchise. He exemplified the perfect enforcer of his era of hockey: big, powerful and fearless. The 6-foot-2, 210-pound bruiser is considered one of the best fighters in the populous class of WHA enforcers. When Fotiu dropped the gloves, it was a must-watch bout.

The Whalers remain revered among most hockey communities for their history, legendary players, and unique colors and logo. Though the team’s relocation and eventual demise was a gut punch for many fans, they still have lots to look back on, and with the retro jersey announcement, something to look forward to, as well.