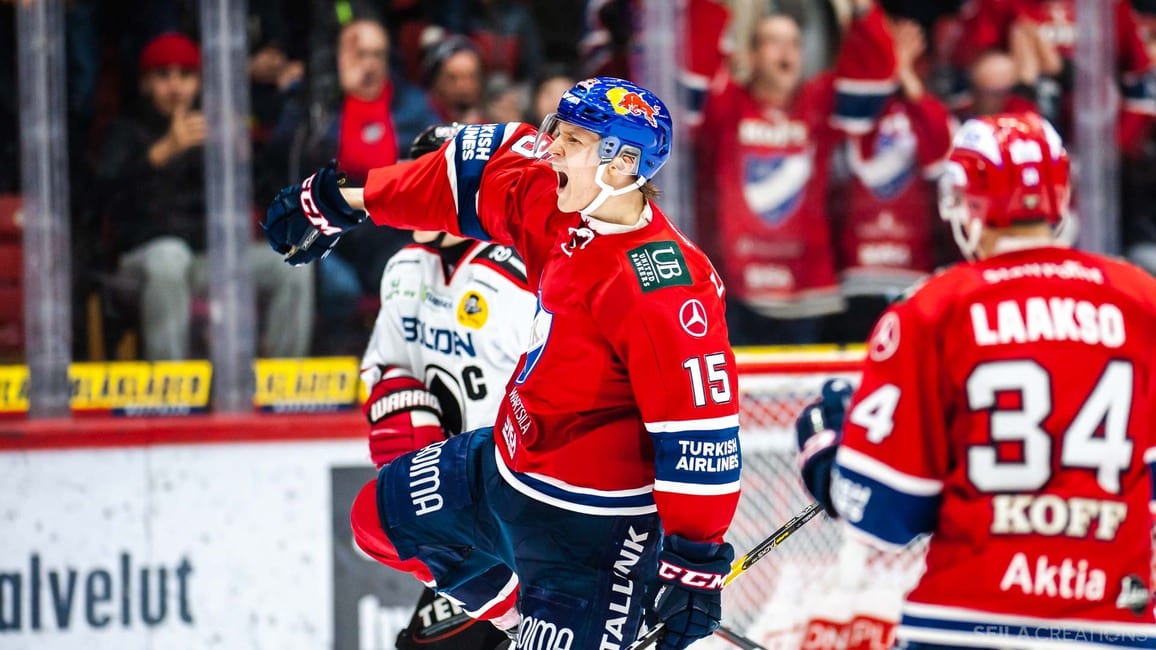 A Florida Panthers’ recent first-round pick registers a record-breaking night in the Finnish Liiga. The Nashville Predators’ top selection from the 2020 NHL Entry Draft is off to an impressive start to the 2020-21 KHL season and a New Jersey Devils third-round pick signs a professional contract in Germany.

Panthers prospect Anton Lundell had a game to remember on Wednesday. The Finnish center registered two goals and four assists in HIFK’s 11-1 victory over Jukurit. It was the first six-point game in the Finnish Liiga since 2011 and Lundell became the youngest player to ever record six points in a single game. He broke a record that had stood for 45 years surpassing the previous record holder Jouni Rinne who achieved the feat in December of 1975.

The six-point effort brings Lundell’s season totals to 11 goals and eight assists for 19 points in 14 games played. He is ranked third in the league in scoring, trailing only Ryan Lasch and Buffalo Sabres prospect Arttu Ruotsalainen. He surpassed his goal total from the 2019-20 season in 30 fewer games and is on track to pass his career high in points in half the number of games. For a player who was criticized for lacking offensive upside, he’s sure proving the doubters wrong.

Drafted 12th overall in the 2020 NHL Entry Draft by the Panthers, he spent the 2019-20 season in the Finnish Liiga with HIFK. He amassed 10 goals and 18 assists for 28 points in 44 games played. He was recently named temporary captain of the team after serving as an alternate captain to start the season. The 19-year-old is on his way to forming a superior Finnish duo in Florida with Aleksander Barkov.

Predators prospect Yaroslav Askarov is proving why there was so much hype surrounding him heading into the 2020 NHL Entry Draft. The Russian netminder is currently playing for SKA St. Petersburg in the KHL and has an astounding 0.956 save percentage (SV%) and 0.96 goals against average (GAA) through seven games played. He leads all KHL goaltenders in both categories despite being only 18 years old. Drafted 11th overall in the 2020 NHL Entry Draft by the Predators, he spent the majority of the 2019-20 season in Russia’s VHL.

THW’s Stephen Dohner had this to say about how Askarov fits into the Predators’ long-term plans.

The Predators are entering an area of limbo at the goaltending position. Pekka Rinne is beginning to show his age while one-time heir apparent Juuse Saros has yet to grab the reins. Askarov provides the Predators with their next franchise netminder while having a bridge in Saros from Rinne to Askarov. What could have been a position of question now looks to be crystal clear.

Devils prospects Nico Daws has signed a professional contract with HC Ingolstadt in Germany’s First Division the Deutsche Eishockey Liga. Daws was originally born in München, Germany but holds Canadian citizenship. Drafted 84th overall in the 2020 NHL Entry Draft, he spent the 2019-20 season in the Ontario Hockey League with the Guelph Storm. He had an amazing season, which saw him lead the OHL in save percentage with 0.924 and win OHL Goaltender of the Year. He also finished with a 23-8-6 record and a 2.48 GAA.

THW’s Ryan Hoke had this to say about the Devil’s selecting Daws on day two of the NHL Entry Draft.

The German-born goalie possesses excellent positional awareness and with his 6-foot-4 frame, he is still very good at moving across the crease. In the third round, New Jersey more than likely got their No. 1 goalie prospect behind MacKenzie Blackwood and it is never a bad thing when a team adds more young, quality goaltenders to the organization.

Daws won a gold medal representing Canada at the 2020 World Junior Championship. He played in two games, registering a 1-1-0 record with a .840 SV% and a 5.83 GAA. He wasn’t named to Canada’s 2020 National Junior Team Selection Camp. The move to Germany is for the remainder of the 2020-21 season, which is slated to begin on Dec. 17. It’s uncertain whether Daws returns to Guelph after his time with HC Ingolstadt is over.