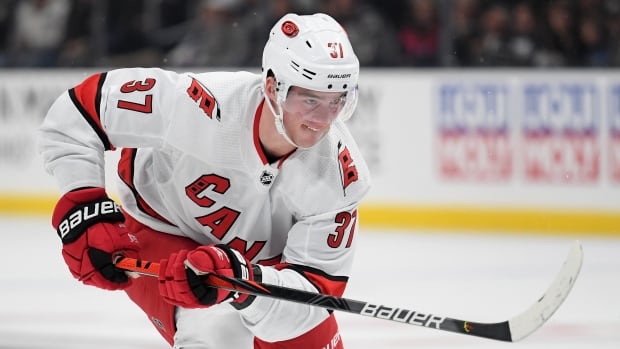 This is an excerpt from The Buzzer, which is CBC Sports’ daily email newsletter. Stay up to speed on what’s happening in sports by subscribing here.

Here’s what you need to know right now from the world of sports:

It took a quarter century, but the lacrosse move finally made it

You’ve seen it: the hockey play where someone scoops the puck onto his blade with a flick of the wrists (usually from behind the net) and tucks it into the top corner of the net. Most of us witnessed this for the first time back in 1996, when a University of Michigan player named Mike Legg scored with the so-called “lacrosse move” (or “The Michigan” if you prefer) during the second round of the NCAA men’s hockey tournament. 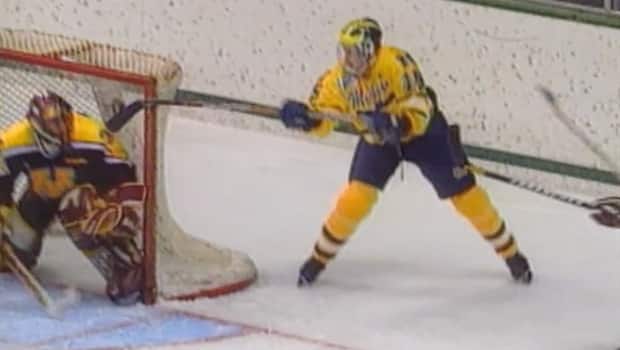 Legg didn’t invent the trick. A career minor-leaguer named Bill Armstrong did it several times before him, and Legg credits Armstrong with showing him the move during summer workouts in their mutual hometown of London, Ont. But Armstrong’s goals came in games no one really cared about, captured on grainy video (if at all). Legg scored his in one of the most popular hockey tournaments in the world, during a game televised live on ESPN. Michigan went on to win the game en route to capturing the Frozen Four championship with a team that featured 11 future NHLers, including Brendan Morrison and Marty Turco. So you could say Legg introduced the lacrosse move to a mass audience.

Legg’s goal went viral — or at least the pre-social-media version of that, appearing on every highlight show and local-news sports segment. If you played hockey at the time, there’s a 100 per cent chance you or someone else on your team tried it at your next practice or pickup game. It was named the “outrageous play of the year” at the ESPYs. It seemed like the lacrosse move might become the next big thing in hockey.

Except it didn’t. No one scored a lacrosse goal in the NHL until 23 years later, when Carolina’s Andrei Svechnikov did it on Oct. 29, 2019. Maybe that’ll go down as the move’s re-birth date, because Svechnikov scored with it again on Dec. 17 and Nashville’s Filip Forsberg one-upped him with an even prettier version a month later. Toronto star Auston Matthews appeared to try (and fail) one too. So, like some other things from the ’90s, maybe the lacrosse move is making a comeback.

A couple of theories as to why: today’s players, top to bottom, are more skilled with the puck (and devote more time to working on those skills) than ever. And coaches are starting to loosen up and allow more creativity. A lacrosse-move attempt in the ’90s might have gotten you benched by a crusty coach. But many of the guys in charge of today’s NHL teams were players when Legg scored his goal. They may have fooled around with the move themselves or at least thought it was cool.

Someone else thought it was cool, and it might surprise you. Steve DeBus was the University of Minnesota goalie who allowed Legg’s goal. A lot of people might prefer to bury such a moment in their past, but DeBus is an affable guy with a healthy perspective on his moment of infamy. He thinks it’s great that young players today are getting creative and trying the move, and he doesn’t even mind that it’s in his son’s new NHL 21 video game.

You can also watch our video on the evolution of the lacrosse move below.

Two reading recommendations for lacrosse-goal aficionados: this 2016 story by Yahoo’s Sean Leahy on how Legg and Armstrong developed the move, and this 2020 story by Vicki Hall for CBC Sports on what makes it so hard to pull off and what goalies are doing to stop it. 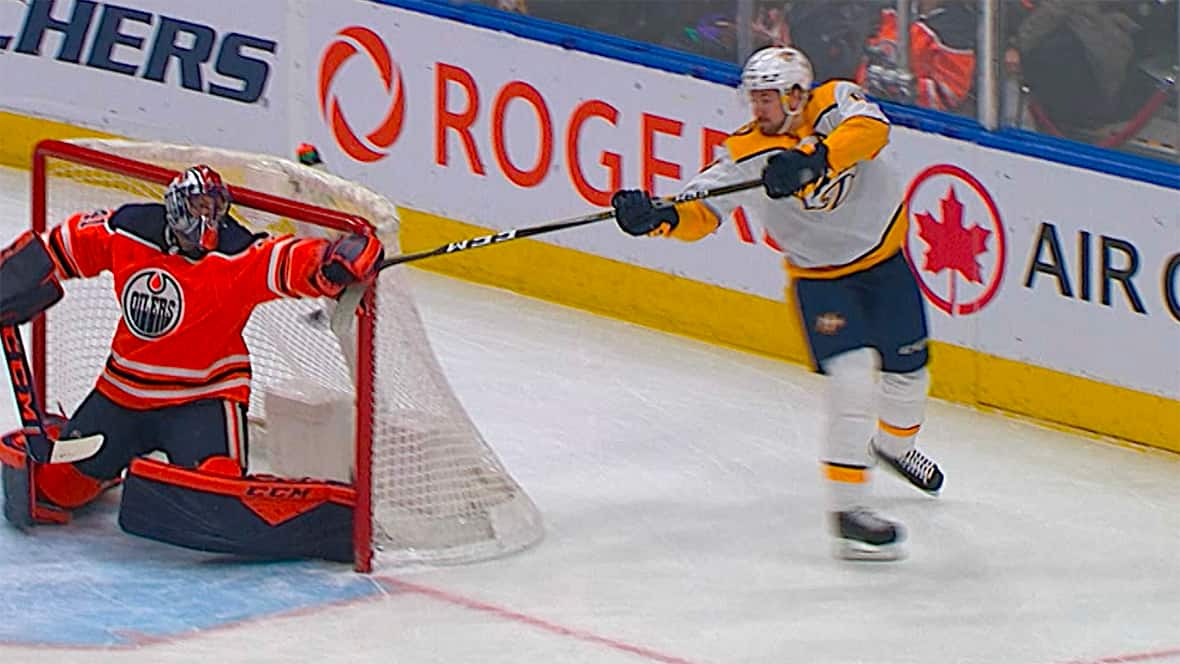 We first saw it done by Mike Legg in 1996 at the University of Michigan. It took 24 years to be done in the NHL, but now the lacrosse goal has happened three times this season. How’d the unique move reach hockey’s highest level? 2:43

Legal single-game sports betting might (finally) be coming to Canada. Federal Minister of Justice and Attorney General David Lametti introduced legislation today that would leave it up to provinces and territories to regulate wagering on single games within their jurisdictions. Currently, the Canadian criminal code limits sports gambling to parlays — multi-game bets where you typically have to get all your picks correct in order to cash the ticket (Ontario’s Pro-Line suite of games are an example). Those who want to wager on single games often turn to online betting sites (most of which are based offshore) or illegal local bookies (many tied to organized crime), and the Canadian gambling industry claims some $14 billion is bet through those channels every year. Lametti and the Department of Justice are framing the proposed legislation as a way to create jobs (especially in areas with casinos) and generate revenue for governments while giving bettors a “safe and regulated environment.” If it passes, bettors could be granted the opportunity to place single-game wagers online and/or in bricks-and-mortar establishments. A similar change happened in the U.S. in 2018 when a Supreme Court decision allowed states the option of legalizing sports betting. Read more about the Canadian proposal here.

Tens of thousands of fans in Argentina lined up to pay their respects to Diego Maradona. A day after the soccer legend and national hero died of a heart attack at age 60, his coffin was displayed at the presidential mansion, covered by the Argentina flag and the No. 10 jersey he wore for the national team. Some mourners wept and blew kisses as they filed past, honouring the man who authored the greatest sports victory in the country’s history. At the 1986 World Cup in Mexico, Maradona scored two of the most famous goals ever — the Hand of God and the Goal of the Century — in the span of four minutes to beat England in the quarter-finals. This was only a few years after England humiliated Argentina in the Malvinas (Falklands) War, so Argentines’ contempt for the English went beyond the soccer pitch. Maradona then led his country to victory in the semifinals and final, cementing his place in national lore. It’s tough to grasp how much Maradona means to his country, but CBC Sports’ Ignacio Estefanell explains it very well in this piece.

Hockey Canada shut down its national junior team selection camp until Dec. 6 after two players tested positive for the coronavirus. The organization said that players, coaches and staff at the camp in Red Deer, Alta., have entered a 14-day quarantine (retroactive to Monday) in accordance with provincial health rules. The purpose of the camp is to prepare and help choose Canada’s team for the upcoming world junior championship, which opens Christmas Day in Edmonton. But this shutdown and the rising coronavirus case count in Alberta — not to mention in Canada and other countries competing in the tournament — raise doubts about whether it can actually be pulled off. Read more about the Canadian team’s quarantine here.

Christian Coleman appealed his two-year ban. The reigning men’s 100-metre world champion was suspended last month for missing three doping tests in a one-year span. Coleman is asking the Court of Arbitration for Sport to either eliminate the ban or reduce it. If his appeal fails, the American will miss this summer’s Tokyo Olympics, where he would have been the favourite to win his first Olympic gold medal. Read more about Coleman’s appeal and another one involving women’s 400-meter world champion Salwa Eid Naser here.

Coming up on CBC Sports

Canadian Premier League Awards: Find out who wins the Player of the Year, Coach of the Year, Best Canadian U-21 and Golden Glove (best goalkeeper) prizes for the soccer league’s second season. Live Thursday at 7:30 p.m. ET here.

Grand Prix of Figure Skating — NHK Trophy: The Japan stop is potentially the last Grand Prix event of the year because the Final (originally set for mid-December in Beijing) was postponed indefinitely. Due to pandemic-related restrictions, all but one of the skaters competing in Osaka are from Japan (and, once again, there are no Canadians). Also, there’s no pairs event. Watch the opening programs in the women’s, dance and men’s competitions live Friday starting at 1:15 a.m. ET here.

World Cup skeleton: This week’s events are being held on the same track in Latvia that hosted the season openers last week. Once again, no Canadians are competing. The women’s race is Friday at 3 a.m. ET and the men’s at 8 a.m. ET. Watch them both live here.

You’re up to speed. Get The Buzzer in your inbox every weekday by subscribing below.