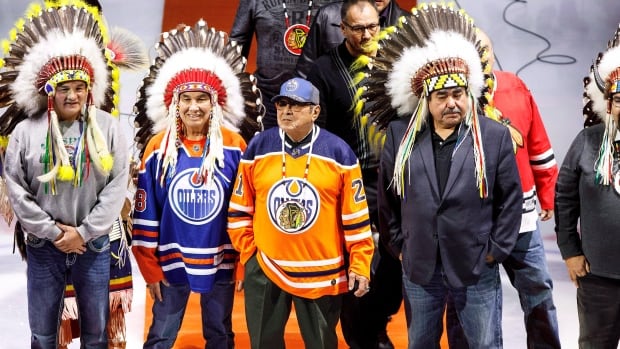 Tributes are pouring in for Fred Sasakamoose, who died Tuesday at age 86 after being hospitalized with COVID-19.

Sasakamoose was one of the first Indigenous athletes to play in the National Hockey League.

“We are at a loss today. Fred Sasakamoose was a legend with humble beginnings. He will be dearly missed,” the Federation of Saskatchewan Indigenous Nations tweeted.

“We are deeply saddened to learn of the passing of Fred Sasakamoose. Fred holds a special place in the history of our great game,” tweeted Hockey Canada’s Tom Renney.

RIP to my buddy, Freddy Sasakamoose. <br><br>He was a trailblazer, a leader and a survivor. <br><br>He paved the way for so many Indigenous hockey players. <br><br>My thoughts and prayers to the family 🤍<br><br>Rest Easy, Legend. <a href=”https://t.co/GQxQJuqGzx”>pic.twitter.com/GQxQJuqGzx</a>

“His story is just simply amazing and to have that perseverance and determination to get to where he [did] … it’s pretty crazy to think what he has overcome,” said Lacquette, who grew up in Dauphin and whose mother is from the Cote First Nation in Saskatchewan.

“He’s a very humble man, soft spoken, and could really make you feel like you’ve known him your whole life. [He] was just an amazing person and someone that I’m very glad that I crossed paths with.”

Sasakamoose’s son, Neil Sasakamoose, said in a video on Facebook that his father died Tuesday afternoon, five days after he was admitted to the hospital.

“A lot of people say he only played 11 games.  But those 11 games were everything to our First Nations people,” Leach said.

Every ethnicity has their Heroes in every sport, and I’m saddened + heartbroken to hear my mentor,my Boy Hood Idol in Fed Sasakamoose who played a key role for diversifying our game has passed away, he opened so many doors for me and others. RIP Fred. Ron Delorme

Leach said Sasakamoose was passionate about helping kids get on the right path.

“[He was] the kindest man that you’d ever meet. And so down to earth,” Leach said.

Today we lost a luminary in the hockey world with the passing of Fred Sasakamoose.<br><br>Fred inspired many across the sport and North America after becoming one of the first Indigenous-born athletes to play in the NHL when he played 11 games with the Blackhawks in the 1953-54 season. <a href=”https://t.co/SiTmcXKQty”>pic.twitter.com/SiTmcXKQty</a>

Sasakamoose also served as a band councillor and chief of Ahtahkakoop Cree Nation.

He was inducted into the Saskatchewan Sports Hall of Fame in 2007 and became a member of the Order of Canada in 2018.