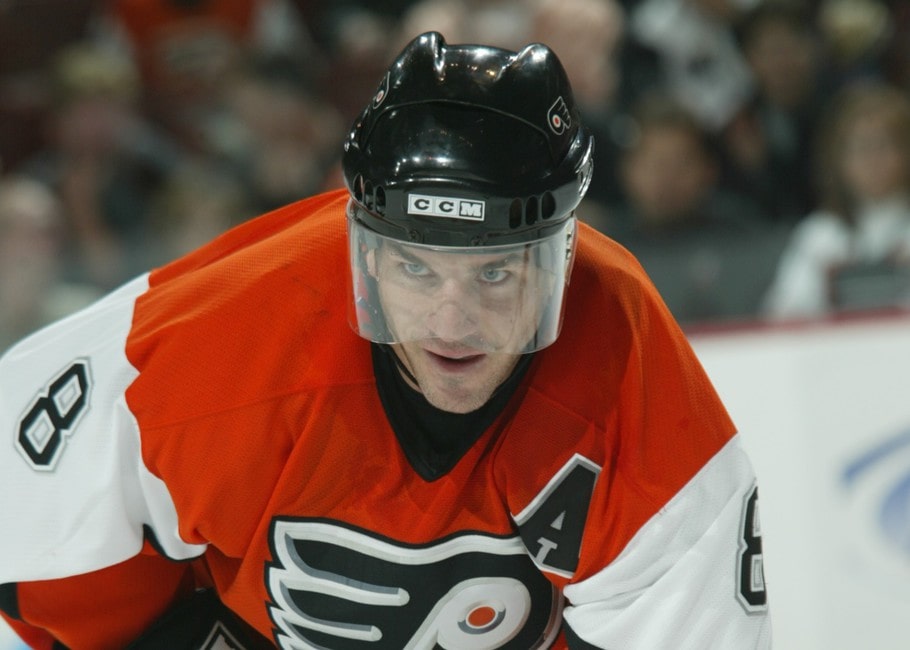 Winger Mark Recchi accomplished it all in hockey. He is a three-time Stanley Cup champion, seven-time NHL All-Star, and a Hockey Hall of Famer among other accolades. He spent his 22-year NHL journey with seven clubs and played in over 1,500 games.

While he did not win a Stanley Cup in a Flyers sweater, some of Recchi’s best memories as a player was with the Orange and Black. He was a stellar weapon whenever he was needed and made the jobs of his teammates that much easier when they stepped on the ice.

Recchi was drafted in the fourth round of the 1988 NHL Draft by the Pittsburgh Penguins. He previously played for both the New Westminster Bruins and the Kamloops Blazers of the Western Hockey League (WHL) where he put up the following numbers:

The last season he played for the Blazers, his offensive production skyrocketed, a sign of what was to come for the young talent.

The 1988-89 campaign was Recchi’s first in the NHL. He got his feet wet, suiting up in 15 games for the Penguins posting a goal and an assist. His first full season the following year is when his offense took off. He put up 67 points in 74 games in his rookie season before topping the 100-point total in a season after that in 1990-91.

The highlight of Recchi’s tenure as a Penguin came during that 1990-91 campaign. Not only did he chalk up 113 points during the regular season, but he provided offensive stability to a team that already had Mario Lemieux, Jaromir Jagr, and Paul Coffey among others. They went on a deep postseason run, and with contributions from throughout the lineup, they earned a Stanley Cup Final berth against the Minnesota North Stars. The Penguins won the series in six games, claiming their first Cup in franchise history.

During the following season (1991-92), Recchi was traded midseason to the Flyers. The deal included Recchi, defenseman Brian Benning, and a first-round pick in 1992 for Flyers captain Rick Tocchet, defenseman Kjell Samuelsson, goalie Ken Wregget, and a third-round selection in the 1992 Draft.

Recchi left the Steel City with these regular season stats:

Recchi joined a Flyers team that had Rod Brind’Amour, Mark Howe, and Mike Ricci among others. He fit in well off the bat, compiling 10 goals and 17 assists in 22 contests.

A couple of the best statistical seasons of Recchi’s career occurred during his first stint in Philadelphia. He became a goal-scoring machine, hitting the 100-point plateau more than once; first in the 1992-93 campaign when he tallied 53 goals and 70 assists for 123 points, which stands as the regular-season points record for a Flyer. He followed that up with 107 points in 1993-94.

His offensive explosion came after he joined a line with Eric Lindros and Brent Fedyk. They became known as the Crazy Eights Line (Lindros wore number 88, Fedyk 18, and Recchi 8). The trio was dynamic and well-known before the Legion of Doom years later.

Related: Every Stanley Cup Winner Since 1960

However, despite the strides Recchi made on the ice, the team was falling short, missing the playoffs season after season while he was there.

Recchi’s stats during his first tenure as a Flyer are below:

Following the 1994-95 NHL partial lockout, the Flyers dealt Recchi in a big move to help shape their team. They needed to bolster their defense, and Montreal Canadiens d-man Eric Desjardins caught the eye of Flyers management.

The official deal included Recchi and a 1995 third-round pick for Desjardins, left-winger John LeClair, and winger Gilbert Dionne. Recchi was heading to Canada, but it wouldn’t be long before he was wearing the Orange and Black again.

A Return to Brotherly Love

Recchi spent parts of five seasons with the Canadiens where he continued to notch solid numbers. Despite that, he was on the trade block again. In 1998-99, he was moved back to his old team in Philadelphia. Recchi was dealt for young winger Dainius Zubrus, a 1999 second-round pick, and a 2000 sixth-round pick.

Recchi posted superb stats in his second go-around with the Flyers. He might not have racked up as many points as in his first stint, but they were still really respectable:

In addition, Recchi was a force in the playoffs, the first time he saw postseason action in a Flyers sweater. During his second stint, the team made the playoffs in six consecutive seasons (1999 to 2004). He totalled 19 goals and 20 assists in 65 games in that span.

One of the pinnacles of Recchi’s second tenure in the City of Brotherly Love was in the 2000 Playoffs. The Flyers made the Eastern Conference Final and found themselves in a Game 7, after giving up a 3-1 series lead to the New Jersey Devils.

The Flyers faithful want to forget that game, but Recchi was a solid scoring leader during that entire run. He led the Flyers in points by a nice margin with 18 points in 18 games (6 goals and 12 assists) in a campaign that fell just short of returning to the Stanley Cup Final.

Another highlight for Recchi in Philadelphia was the 2004 Playoffs. He was a big factor in the team reaching the Eastern Conference Final again, when, this time around, they faced Martin St. Louis and the Tampa Bay Lightning.

Recchi put together four goals and two assists in 18 games in that run and was a complementary scoring piece alongside Keith Primeau, Michal Handzus, and Jeremy Roenick among others; he didn’t make as much offensive noise as he had in 2000, but still made a significant difference. The Lightning walked away victorious, though, winning their first Cup in franchise history.

The 2003-04 season was Recchi’s last in Philadelphia in his career. He left as a free agent and returned to the Penguins on a multi-year deal. He may not have been a Flyer any longer but success still followed him for the rest of his NHL journey.

After leaving the Flyers for the second time, Recchi played a key role in two Stanley Cup championships as a player. The first was during the 2005-06 season.

Recchi was traded to the Carolina Hurricanes as the team geared up to make a run for their first Stanley Cup championship in team history. The club was deep with talent, with Eric Staal, former Flyers teammate Brind’Amour, Doug Weight, Ray Whitney, and Mike Commodore among others.

During that postseason ride, Recchi tallied seven goals and nine assists in 25 games, as the team beat the Edmonton Oilers in seven games to win the Cup.

Recchi’s final Cup came during his time with the Boston Bruins. He was traded along with a second-round pick in 2010 from the Lightning to the B’s during the 2008-09 season in exchange for defenseman Matt Lashoff and winger Martins Karsums.

Recchi spent a little over two full seasons with the team, and made it to the Stanley Cup Final in 2011 when the Bruins beat the Vancouver Canucks in seven games; the third Cup of Recchi’s career.

Recchi hung up his skates in 2011 having played for the Penguins, Flyers, Canadiens, Hurricanes, Atlanta Thrashers, Lightning, and Bruins. Overall, he played in 1,652 games and scored 1,533 points (577 goals and 956 assists). He was inducted into the Hockey Hall of Fame in 2017 and is now an assistant coach with the Penguins under Mike Sullivan. Recchi won two more Cups with the Penguins in 2016 and 2017 as a coach, moving his Cup total to five.

Respected in the Hockey World

Recchi had a career that will never be forgotten. He made every lineup he joined that much better. Being able to win a Cup with three different organizations has only happened a few times, and it shows how impactful a player like Recchi can be. He represented the Flyers and the other teams he suited up for with a solid skillset and earned every bit of respect he receives to this day.